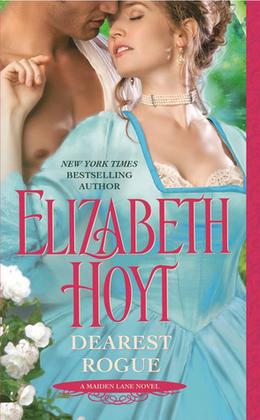 When I think of a historical romance novel, I picture a strikingly beautiful woman dressed in ornate hand-sewn gowns with bodices sneaking off with a handsome man in uniform who will do anything to protect her. Dearest Rogue by Elizabeth Hoyt is just that book!

Sponsored links
The true epitome of a historical romance novel…this is a fast paced romance that sweeps you off your feet and carries you through the fashionable and pristine private gardens of London, into the filthy underbelly of St. Giles, past bawdy inns, and all the way to the comforting Cornwall coast. This is a story of a handsome and strong, pistol-carrying Captain searching long and hard to find and rescue a high society, beautiful maiden from hostile kidnappers and from himself. This is a story of forbidden love that should not to be missed!

Set in 1741, London, England: Dearest Rogue begins with one of many suspenseful kidnapping attempts upon the gentle Lady Phoebe Batten. Are the kidnapper’s evil thieving brutes? Or a man named Maywood? Or even a Duke? Why are they attempting to kidnap her? Is it for ransom, forced marriage, robbery, revenge or even worse? All these questions haunt those who reside at Wakefield…duh, duh, duh…

Lady Phoebe is protected by her ever-present and attentive body guard, Captain James Trevillion but also controlled by her brother, Maximus Batten, the Duke of Wakefield. She is shielded not only because of her social status but also because of the fact that she is blind. Our beautifully, curvaceous heroine is not only delightful and sweet; she is also opinionated and determined. You will enjoy getting to know her. I found it refreshing that Phoebe’s blindness is not her disability, as it does not define her… she instead optimistically focuses on her abilities. When she feels like a caged bird, she acknowledges this and demands more from life. And when we meet her? She is at the cusp of her awakening. This physical, emotional, moral and sexual awakening is thrilling to witness… especially with the loyal and oh so sexy Captain James Trevillion at her side.

So who is this dearest rogue?

There are many scheming and conspicuous characters that could be given this title, but I think it truly belongs to our hero, Captain James. I love how the word “rogue” can just transport you to a different time and place… Defined as a “dishonest or unprincipled man” or “one who causes trouble in a playful way”, Trevillion doesn’t seem to fit this description. On the outside, he is an honorable, former soldier of his majesty’s fourth Dragoons, but in the inside he is full of secrets and lust for his charge Lady Phoebe. It is his duty to be the trustworthy ever-present body guard of Lady Phoebe Batten and this is a role he takes seriously. Even with a lame right leg, he painfully fights for his love. He would die for her. (Insert sighs of lust and longing here). James tries his very best to follow all the rules of society, but even HE becomes unprincipled and succumbs to his desires. When he takes her to the coast of Cornwall (to his family home and stables) he no longer can fight his attraction.

Phoebe also battles with this. She is Trevillions charge, yet she desires to be his lover and wife. She’s a Lady (an aristocrat) while he is much lower than her in the social rankings. After being thrown into multiple kidnapping attempts, arguments, pistol fights, failed marriage plots and catastrophic misunderstandings, the couple throw caution into the wind and escape to Cornwall. Wearing Trevillions mother’s wedding ring as a disguise, the couple pretend to be married in order to hide undercover. They venture away from their troubles in London and away from the watchful eyes of others. Here they are safe to experience the pure pleasures of passion.

Unable to rely on her sight, Phoebe becomes so in tuned to her other senses. I cannot imagine what life would be like without sight… to only see darkness but after reading this book, it made me think about how much I rely on sight and how I often ignore my other senses. It was truly mesmerizing to learn how Phoebe uses her sense of hearing, taste, smell and touch along with her quick wit to survive. With careful and detailed descriptions; Elizabeth Hoyt gives us a character unique from others and a character that shows us that being blind is not only about darkness.

Let’s think about this for a minute… or ponder. Yes, ponder seems more accurate word for this historical romance. Let’s ponder about the sense of hearing. A damsel in distress… a girl who is repeatedly kidnapped in this book has to listen to the sounds of the street and conversations of brutes to figure out where she is! Also characters that are close to her often provide descriptions of the people in the room, the surroundings and other important information that is helpful to Phoebe (and the reader!) Next is taste. You’ll laugh when Lady Phoebe tastes the oh so common beer and bitters for the first time. You will probably want a sip of the French Brandy that Trevillions father gives to her in order to wash down her immobilizing nerves and fear when James goes missing. You will be enticed by the tantalizing descriptions of tasting salt on James’ lips after a tryst in the ocean or wonder along with her whether or not other ladies taste their lovers like she does.

Smell is a sense that Phoebe cleverly uses to ascertain where she is or learn who is close by. When she smells sewage she knows she is close to the Thames (Ha! Eau de toilette? Gotta love the historical realism in this book!) When she smells “coffee” mixed with the faint odor of horses (EW!) she knows her trustworthy friend Captain James is nearby. Thankfully she buys him a gift of bergamot and sandalwood cologne to remedy this.

As James and Phoebe become further entwined with each other, I ensure you so will you. This eighth installment of the Maiden Lane series is an enjoyable and well-written book. So make yourself a cup of tea, or pour yourself a bitter and then draw yourself a hot bath because this is the ultimate escapist novel…a read that will leave your senses truly thanking you.