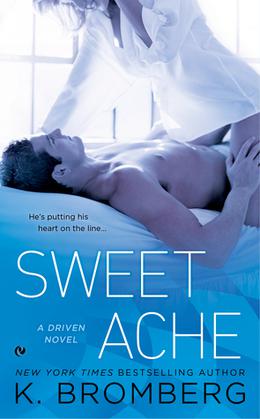 K. Bromberg’s Sweet Ache--the sixth book in the Driven trilogy, features the romantic misadventures of Hawkin Play, a musician whose professional success is only tempered by the challenges of his personal life. Most recently, although through no fault of his own, he’s been in trouble with the law. Fulfilling the central tenet of the musician’s “sex, drugs and rock & roll lifestyle” has put him in a tough spot; so when he finds out that he can soften up the judge at his upcoming court date by filling in as a guest lecture at a local college, he jumps at the chance.

Sponsored links
Quinlan Westlin is on the verge of having everything she’s been after. She’s finishing up her degree, the pieces falling into place for the career she’s always dreamed of. She’s being pursued by a blindingly attractive and successful racecar driver, her brother is finally happy and taken care of; what more could Quin want?

Except that the racecar driver, despite being perfect on paper, just doesn’t light her fire like she wants him to. And her neglected libido is proving a distraction from her increasingly late thesis. So when her mentor offers her an extension on her paper in exchange for acting as last-minute TA for a guest lecturer, who is she to turn it down?

When Quinlan and Hawkin meet, sparks fly immediately--in a manner of speaking. They’re instantly irritated by one another, Quinlan fed up with Hawkin’s perceived arrogance and Hawkin unimpressed with Quin’s apparently baseless combativeness. But when Hawke’s bandmate makes a bet that Hawke could never get Quinlan in bed, he can’t resist the challenge; and before they know it, the two are more entangled than they ever could have predicted.

At its heart, the novel wants to have a sweet story. Quinlan and Hawkin are sympathetic, certainly; but Bromberg throws in so many distracting, soapy plot complications that it winds up just being eye-rollingly maudlin instead of compelling. Every time the plot twisted around itself again, I had to fight to not just put it down and move on. You can have the good twin/evil twin; you can have the detached, mentally unstable mother; you can even have the emotionally unstable mother and the dark secret about the father’s death. You can even have all of those things and a secret bet involving the female protagonist that threatens to ruin everything they’ve built. YOU CANNOT HAVE ALL OF THOSE THINGS.

Worse, while I get that it’s supposed to be about “taming” a “bad boy,” everything about how they get together is just kind of gross. Like, his attitude towards women is not great, and it doesn’t really seem to improve. The only real basis of their relationship seems to be “we have great sex” and “awwww, look how sad he is! I must fix him!”

I get what they were going for with the good twin/bad twin thing, but they made Hunter pathologically evil, not troubled. As a result, it’s almost impossible to sympathize with Hunter’s dilemma. I get wanting to protect your younger sibling if they have problems, but if your sibling is a sociopath and present a clear and present danger to himself and others, it’s much more difficult to understand why you continue protecting him. Sure, this is debatable; but if you want to have that discussion, that should really be the crux of the novel. Instead, it’s just a weird plot device intended to keep the characters separate just long enough for a conclusion, and the “oh shit, my brother is actually evil” moment is so overdone that it’s just irritating. This book had a chance to do something subtle and interesting, and instead it opted for cheap puns and melodrama.

There’s also an almost-rape at the end that really made me just lose patience completely with this book. Look. There isn’t a single woman in this book that isn’t defined by her refusal to leave a man who has repeatedly wronged her in ways that are not cool. The only woman who tries to leave the guy she’s with (after he’s completely destroyed her trust) winds up in a mental hospital from the fallout. The apparent moral of the story here is that you should definitely pursue damaged men who screw you over, because true love, blahbetty blah, and I was going to let it slide, but then they had to throw in a nice, completely unnecessary dose of sexual assault for no reason.

On top of that, the “happy ending” is all about Hawkin getting to have Quinlan as his lady-friend, but completely ignores everything that they set up for Quinlan as a character. Did she even finish her thesis? Are we to assume she didn’t care? Like, now that she’s getting sex, her advanced degree and the career she’s been working towards for a lifetime just.. doesn’t matter?

The sex is good, I’ll grant it that. But it’s so drowning in terrible musical puns (do not get me started on the terrible musical puns. The next person who makes such a pun in my direction will be repeatedly violated with a bass guitar), that you can’t even really focus on the action. Seriously. He’s a musician, and his last name is “Play?” Really? I’m frankly shocked that the racecar driver’s surname wasn’t “Wheel” or “Skid.” I don’t care how much music matters to you, no one thinks that consistently in strained, half-baked musical metaphors. No one.

The actual central romance is fine, honestly—all the usual, unbelievable chemistry, mind-blowing sex, dramatic reveals, etc. It’s just that I’ve just read so much better before, and I’m sure I’ll come across better again. Sweet Ache had a good concept, but it’s groaning under the weight of so much strained prose and melodramatic twists that you can barely keep up with the actual romance.