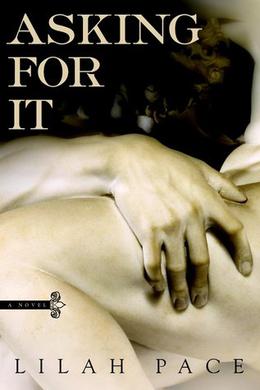 In the past week, here at Romance & Smut, Grace and I have been fighting over Lilah Pace's new book 'Asking for it'. Although both of us agree that it is very well written indeed, our opinions completely clash over whether we like the book or not. Therefore we ultimately decided to publish two separate reviews, with very different ratings, to carry on the discussion online. This is my review, and you can read Graces's take on it here. And we'd be absolutely interested to hear your opinions as well, so let us know your thoughts in the comments!

Sponsored links
In addition, Lilah Pace was gracious enough to answer some of our burning questions, which you can read here.

Trigger warning: This book depicts sex scenes in which fantasies of non-consent are acted out between consenting adults, but also includes flashbacks to actual rape.

Sometimes you pick up a new romance book and realise within the first few pages that it will not just be a compelling read, but also the start of a larger conversation. 'Asking for it' by Lilah Pace is such a book. It's a beautifully written and expertly plotted romance book with some of the most likeable and self aware protagonists I have encountered in a while. But it is also a dark story and manages to push the boundaries of a genre which has certainly borne witness to its fair share of 'dark and twisted' tales in the past years. I finished 'Asking for it' in one go. And it has staid with me ever since.

The story is told from Vivienne's point of view, a 25 year old doctoral student at the UT Austin School of Art and an accomplished artist, with lovely friends, a lively social life and promising career. When she meets Jonah, they soon realise that they share the same sexual kink: Rape fantasies. Brutal, frightening, all out violent rape fantasies to be exact. After some initial consideration and negotiation they then decide to explore their fantasies together. And what starts out as a friends with benefits situation slowly develops into a romance, as both start to acknowledge the person behind the matching sexual desires…

The previous paragraph could be one way to outline the general plot, and if that would be all there is to it we would be left with a touching story that is written by a very talented author who describes tender moments between two interesting protagonists who fall slowly in love with each other amid scorching hot and intensely evocative sex scenes… But what makes the story so intense and the undercurrent emotions darkly complex is the fact that Vivienne is a rape survivor herself and is seen struggling with questions around guilt, shame, agency and boundaries throughout the book.

Of course, rape fantasies in romance books are nothing new. In fact, the opposite is true, non-consensual narratives are as old as the genre itself. It started out as a plot device that allowed female protagonists to enter sexual relationships in the interest of steamy stories while at the same time retaining their 'moral infallibility' in a conservative era. Fortunately, this kind of storytelling has been taken away with, but nonetheless, even though attitudes around women's sexuality changed quite a bit, rape fantasies have remained to be very common. And it is therefore no surprise that stories around those kind of sexual fantasies have continuously appeared in romance books and erotic fiction.

Nowadays, there seem to be mainly two variants of non-consent in romance books. Books such as 'Willing Victim' take the BDSM motto of safe, sane and consensual to heart and depict the exploration of non-consensual fantasies as just another kink, another flavour in the variance of sexual desires between two consenting adults. In this scenario, boundaries are clear and everything that happens, happens only because the people involved want it to happen. From the beginning to end, the non-consent is acted out and remains a game of make believe in the interest of sexual gratification. Then there are the so-called 'dark romance' books out there, in which the heroine is actually sexually assaulted by the male main protagonist (let's not call him a hero just yet…), which then usually leads him onto a path of redemption. For the readers these stories work because again it is clear that this is only a fantasy, a work of fiction with no victims, written in the interest of providing a dramatic tale with depictions of a sexual fantasy many women share.

'Asking for it' is different in that it blurs the lines regarding what's real and what's fantasy, and in my opinion this is what makes it such a compelling, if at times difficult read. On the one hand, rape is discussed in all its horrific reality and brutality along with the long term trauma and struggle victims of sexual assault suffer from. On the other hand, the fantasy of it serves as the foundation and fabric of the erotic scenes in the book. And because Ms Pace is such an amazing writer who allows us to witness and co-experience Vivienne's anticipation, excitement, tension, fear and then explosive release almost unbearably closely, reading the book is disturbing as the story can go from rape as fantasy to living with the real life consequences of having been raped within a few pages.

I was also thinking a lot about some of the choices Ms Pace made with regards to telling the story, starting with the title 'Asking for it'. Let's not forget that this phrase, in all its cultural prevalence, is the very embodiment of not just attitudes of abusers but also one of society at large which idly stands by and which places the blame of horrific crimes firmly at the feet of the victims. It is also an aggressive exclamation of the self doubt and feelings of guilt many victims, Vivienne included, struggle with in the aftermath of such an attack. So choosing this phrase as title is clearly a provocation. On the other hand, Vivienne is in fact 'asking for it' when it comes to fullfilling her desires and the book makes a strong case for the claim that this must be okay and that there is no 'right way' to be and feel as a victim of rape. The provocation in the title then almost feels like the mission statement of the book as it pushes its readers to think about their own attitudes and expectations when it comes to rape survivors.

It is hard to imagine that a similar plot would work with protagonists less self aware and articulate. Throughout the book there are ongoing conversations not just between Vivienne and Jonah, but also Vivienne and her therapist about boundaries, risks and possible consequences. I am wary of narratives reproducing the stereotype that only damaged people engage in BDSM style sex and fantasies and this book clearly opens the door to that kind of reasoning. However, through the sessions between Vivienne and the therapist the author also expressly argues that reasons of particular sexual desires are difficult if not impossible to pin down, unlikely to be monocausal and that therefore shame and guilt are essentially superfluous. I cannot argue with that.

I highly recommend this thought provoking book. It is a carefully crafted story about a very difficult topic. The heroine is immensely likeable. She is smart, vivacious, articulate and just a joy to be around. Through the conversations with her therapist we see that she enters the relationship with open eyes, not as a victim but with agency. The hero as well is great. Even though he falls into the maybe not so realistic super rich, super attractive, super all around professor category, personality wise he is realistically written. Sensitive, sensible and sexy, but not without his own insecurities, boundaries and problems and not just there as a sexual fantasy projection.

And it is down to Vivienne and Jonah that I am now impatiently waiting for the next instalment of this series which ends on a small cliffhanger. Not just because I want to see how their story unfolds, but because I found myself actively enjoying spending time with them.