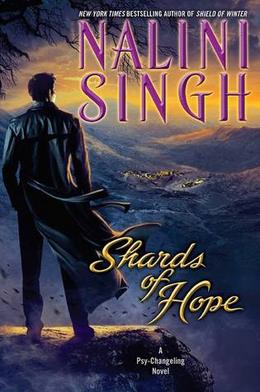 Nalini Singh’s Shards of Hope is the latest addition to her Psy/Changeling series. Seventeen books on (not including her “half” installation novellas and short stories), Singh hasn’t lost any of her prowess. If anything, her storytelling shines more than ever as she brings us a new romance featuring Aden, the powerful new leader of the Arrows, and Zaira, his powerful and almost psychotically loyal compatriot. This book is fantastic. Not that Singh ever really disappoints; she’s an extremely talented writer who knows how to craft a story that is complex and riveting without being utterly overwhelming. There is a LOT going on here. Shards of Hope boasts dozens of characters, memorable conflicts, and a chaotic narrative with tons of subplots (that, impressively, all twine together by the novel’s end).

Sponsored links
Aden and Zaira awake to find themselves imprisoned, unaware of where they are or who has taken them hostage. Their only hope is to escape--and to find out who would dare to challenge the authority of the Arrows. In doing both, they set into motion the first real challenge to Aden’s power since Silence has fallen, and inexorably begin a journey in which all of the Arrows, young and old, must truly face themselves for the first time in a lifetime.

If you haven’t read any of the Psy/Changeling series, I don’t know if I would recommend starting here. You could definitely muddle through--Singh is good about dropping enough contextual clues that you can catch up if you’re not familiar--but you’ll definitely feel more grounded if you already know the ground rules of this particular universe. One of Singh’s favorite themes seems to be whether or not we can outgrow the sins or traumas of our pasts. All of her characters are profoundly damaged, for some reason or another; and unlike most romances, where the conclusions are obviously foregone from page one, there’s real concern that these people are simply too broken to have anything remotely functional. Not an uncommon theme, but one handled here with a sensitivity and complexity that’s rare.

Zaira and Aden’s relationship is central to the story, but it doesn’t dominate to the point where the rest of the plot is just window dressing, which I appreciate. Their love story, despite the shapeshifters, the psychic powers, the political coups and kidnappings, was still one of the most realistic and empathetic representations of a relationship I’ve seen in a long time. It’s not often that you’re given a narrative about two adults starting from a place of mutual attraction and respect, carefully navigating through one another’s flaws and reservations, trying to build a partnership that will endure despite their fears and the scars of their past. You know--real people love. That’s, uh, pretty much how it works, whether or not one of you has a penchant for turning into a jungle cat.

Zaira especially is such a compelling character. Yes, Aden is great and engrossing and the savior of his kind, Jesus allegory, etc., but Zaira is the interesting one. She’s so incredibly, sympathetically, broken. And yet she fights for herself. She struggles to embrace her dark past and overcome it, and while Aden helps her, supports her, he doesn’t save her. He just loves her and lets her work through it herself. Their dynamic is amazing. Zaira is so strong--lethal, in fact, as we are often reminded--and her fragility doesn’t make her pitiable, just human. Her past, which could have been played up to make her just a victimized girl who needs saving, is instead treated as an unavoidable part of the woman she is. To a (significantly) lesser extent, all women struggle with this conflict between their strong and fragile selves. All people do, really. So when an author captures that so well, it’s incredibly engaging.

I will warn you, though, that after reading this novel, you may or may not start trying to karate-chop your way out of your problems. It’s like watching an action-y sci-fi movie. I just wanted to punch things! And then have sex with them! Possibly while punching them! (Side note: I have a huge soft spot for semi-aggressive foreplay in my romance novels. If the leading man and leading lady can start more-or-less fist fighting and immediately transition into sexy times, I am sold. YES.) There isn’t a ton of sex, but what is there is really well done. Without a single weird euphemism and minimal discussion of actual body parts, Singh manages to craft sex scenes that are sensual, frenetic and absolutely arousing.

Side note: There are so many side characters! I had a difficult time keeping up once or twice. Singh is really good at getting you all worked up about one narrative before abruptly throwing you into another, and while it’s a great storytelling technique, it can be maddening. Of course,  an enormous number of these characters have already had their own novels. Everyone we meet, or meet again, in Shards of Hope has their own story, and many of those stories are just as compelling as Zaira and Aden’s. Keep an eye out, especially, for the Leopard changeling pack; I don’t remember the last time I met a fictional group of people and wanted so badly to pack up and move in with them. Toddlers that are ALSO KITTENS? YES PLEASE. There’s also a young lady who provides a wonderful foil to Zaira’s almost superhuman self-sufficiency, and I have a feeling we’ll be treated to more of her in the future. I’m looking forward to it.

Zaira and Aden’s story is absolutely riveting, and the overarching plot developments in Shards of Hope have left us with a Psy/Changeling world much changed. It’s a world early readers of the series will be intrigued and enraptured by, and one I am excited to explore in further novels down the line.