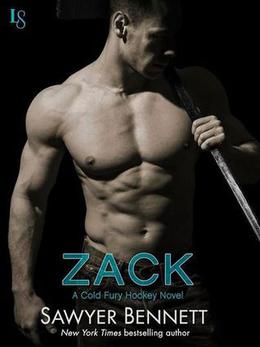 Zack, the third novel in the Cold Fury Hockey series, is the latest novel by prolific author Sawyer Bennett. Following the complicated romance between the titular - and recently widowed - Zack Grantham and his new nanny Kate Francis, the novel strikes a charming balance of sweetness and drama, while packing a surprisingly sexual punch.

Sponsored links
Zack Grantham, by the time we meet him, is a machine that runs on two things: guilt and hockey. As a talented player for the North Carolina Cold Furies, he had everything that most men dream of. A promising athletic career, plenty of cash to throw around, a beautiful supportive woman at his side, and a new son--all of which is shattered when a tragic accident takes the life of Gina, his longtime girlfriend and the mother of his son. Worse, Zack blames himself for Gina’s death, and for not marrying her when he had the chance. Luckily, Zack’s son, Ben, is the light of his life. The two of them, struggling to reassemble a life in the absence of the woman who had previously defined and supported their world, cling to one another, and no one could be closer or more in tune with their child’s life. But with his injury from the accident healed, it’s time for Zack to get back on the road with the Cold Fury team--and so, he needs someone to run the household when he’s gone.

Kate has been working her whole life. Between a dead mother, a loving but unreliable father, and her dreams of surpassing her humble roots, there has never been a time in Kate’s life when she wasn’t struggling to support her dreams. After spending five years working her way through undergrad, Kate is on the threshold of beginning her master’s degree. She just needs a job that will let her save up the cash for tuition. So when she finds herself applying to be Zack’s live-in nanny, it seems like the perfect gig: no rent, food provided, and a hefty salary, working for a hockey player whose team she’s idolized since she was a child. As an added bonus, Kate and Ben get on like a house on fire. What more could a girl ask for?

Zack is, overall, an incredibly sweet novel. Katy, especially, is just ADORABLE. I love her. I love everything about her. She’s authentic and easy to empathize with, and her tough background is used to explain some of her character traits, but not played up for cheap dramatics. She’s a sunny, entertaining, and intelligent young woman, and spending half the novel in her head is a pretty pleasant place to be. Her background and personality also explains why she spends the first two acts of the novel barrelling towards a relationship that she’s been warned ahead of time won’t work; she’s an odd combination of a hopeless romantic and a ruthless pragmatist, and so while she can’t keep herself from doing something she knows is stupid, she’s too smart for it to feel like she’s being taken advantage of.

This is, oddly enough, the second novel I’ve reviewed in the last month that features two romantic leads bonding, in part, over a child, and as a lady without babies in my life, I’m astonished by how utterly endearing it is. Like, I would not expect to want children, or the concept thereof, anywhere near my romance novels, because children are not sexy. Nothing about them is sexy. They are sticky and loud and yes, the best thing that’s ever happened to you thanks, but, you know, not a turn on. But! Two adults having to do the oft-tiring task of co-parenting (or parenting and nannying) as a team is a surprisingly good opportunity to flesh out a relationship in ways that are more meaningful than the excellent sex and one or two shared interests that a lot of novels rely on.

I usually don’t know how to feel about characters that rely on the “she seems so plain until BAM OH MY GOD LOOK HOW BEAUTIFUL SHE IS.” I mean, if homegirl was wearing a burka and he literally hasn’t seen anything but her eyes, I’d get it, but let’s be real, beautiful girls look great no matter what you dress them in. Gisele Bundchen in the hamburger costume from Bob’s Burgers would still be a paragon of female beauty. In this, though, the device is forgiven because it’s less about a woman being made over in order to be sexually appealing, and more about an awkward, flighty girl turning into a more confident, put-together, woman.

Zach is, of course, super sexy. We know the drill here. He is also, however, a hockey player, which allows you to imagine him as any hockey player you think is most attractive. This is helpful because almost all hockey players are beautiful, beautiful specimens of humanity, even if they occasionally suffer from but-his-face syndrome. (To be fair: they get hit in the face, like, a lot.) He’s definitely the sort of archetypal “sad, tortured, beautiful man” you find in so many novels, but I thought his broodiness was handled well. Not too over-the-top, and easy to relate to.

The sex is great. Like holy guacamole, Batman, these are some sexy sex times. Everytime they get their bone on, it’s just fantastic. Zack gets to take Katy to some exciting new heights, without relying too heavily on the “inexperienced ingenue” angle (I find that sort of abrasive, sometimes. Women don’t need a man to “teach” them to have pleasure, this is a trip you’re taking together!) And, of course, she guides him to some new places, as well. It’s a great dynamic and they have chemistry for days.

It’s already been put out there that Ryker, one of the side characters, is getting his own novel next; I’m looking forward to it. Ryker is, by hockey standards, getting on in years; his career is winding down. He’s facing life as a newly-divorced single dad. Much like Zack, I think his story will be touching without being over-the-top, and I’m excited to read it!