Only a Promise (The Survivors' Club #5) by Mary Balogh 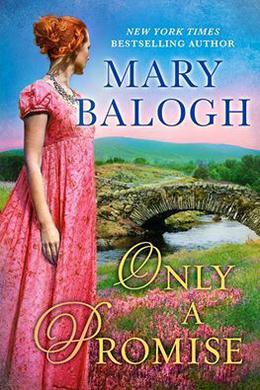 Only a Promise is not only a great read; it is a historical romance that makes you feel like you are sitting in a ladies room nibbling on a tea cake, sewing embroidery a handkerchief and planning which gown you will wear to the next ball. In Mary Balogh’s fifth book of the Survivors’ Club series (and a standalone) we meet Chloe Muirhead, a fiery red headed, 27 year old spinster. Chloe is trying to run away from shame her younger sister has brought upon her and the scandalous rumours of her lineage…Gasp!

Sponsored links
Now living as a companion to the elderly Duchess of Worthington, Chloe’s overhears a conversation about marriage between the Duchess and her Grandson. Due to the fact that his Grandfather is on his death bed (and his own father had perished), Ralph is told that now is the time to find a wife. Of course the sole purpose of the union is to produce a living heir. Ralph has no interest in the fancies of love, but succumbs to his duty and plans to travel to London to find a wife.

The wheels in Chloe’s mind rapidly turn and she hastily proposes to Ralph. She promises to dote upon him and their future children, if in return he promises that she will never have to venture to London again. She hates London, because it is the place where her sister, Lucy embarrassed her (when she ran off with the smarmy actor, Mr. Nelson ruining Chloe’s first coming out Season)…and it is the place where her second Season was ruined by the horrid rumours that Chloe is the illegitimate daughter of the Marquis of Hitching, simply because she bears a striking resemblance to his also strikingly beautiful, red-headed daughter, Lady Angela Allandale.

Honestly? I found it hilarious that Chloe proposes to Ralph. She is the meek and quiet mouse and he is the overbearing and loud lion. She is the woman and he is the man. You cannot help but wonder, in the Regency period: would this have happened? Would a woman be so daring to propose marriage to a stranger? This surprising gender reversal is really the catalyst of the plot. It is what places two single people into a position where they are allowed and expected to have sex. I know we cannot have the virginal woman of her stature running off into the field with the powerful, romantic hero… so let’s get them hitched quickly so the marriage bed will become the setting. I get it, but it still makes me chuckle just the same.

Ralph is the quintessential tortured romantic hero archetype who reminded me of a cross between Mr. Darcy and Heathcliff. Seriously, you could just picture Ralph taking a swim in the pond (thank you Jane Austen and filmmakers) or walking across the moors with the rain pounding onto his chiselled body, (thank you Emily Brontë)… as he attempts to rid the suicidal thoughts in his anguished mind. Ralph cannot live with the fact that he convinced his three best friends to go to war with him, and then watched them die right in front of him. Ralph managed to heal his body with the help of the Survivor’s Club in Penderris Hall in Cornwall, but he unfortunately left his heart on the battlefield in Portugal.

I must admit, this plot line made me think about the idea of marriages of convenience. Before Chloe meets Ralph Stockwood, Earl of Berwick's, she already has an opinion of him. He was an unkind schoolmate to her brother and she knows he suffered many wounds while fighting in the Napoleonic Wars. Dreadful scars and snarling expressions of his outward appearances only provide a hint to the internal pain. She dislikes him, but still deems him suitable to marry and he would rather be left alone with his misery than to find a wife. So they both look at their options and consider each other as marriage material. The two couples agree that this will be a loveless marriage and they are both content with that. With the promise, she gets a family; he an heir and no doubt, this still happens today.

Even though this book takes place in the Regency period, it does remind me of present day society. Obviously most of us aren’t exactly dressed in full out ball gowns and have maids at our beck and call, but we still go out to clubs, theatres and other places with the hopes of finding a mate. The idea of the social Season in London reminds me of Spring Break. Of course we have our differences. We are in the digital age. We have the ability to send messages in seconds instead of writing letters and sealing them with wax. We don’t have as much pressure to get married among other things, but when it comes to rumours we still love a good scandal.

Whether it is a Kardashian family member or a Duchess, our society is obsessed with scandal. So when Chloe’s name becomes tainted; we understand how it affects her image. In one scene of the book she becomes so outraged with her scarlet hair colour that she hysterically chops it off in state of madness (similarly to when Anne of Green Gables dies her hair green). I enjoyed how Balogh displays the whims and fancies of Regency era in a way that parallels our own society. The themes of marriage, scandal, pain and love are timeless.

So people of our time, will you like this novel? Yes, I think so. Only a Promise is a well-written addition to a fetching series. With over 90 books and novellas, you just know that this romance author knows how to get the job done! You will enjoy the realistic dialogue (especially the banter between Ralph and Chloe), as I certainly did!

I loved watching how the couple react and respond when they are abruptly thrust into the role of Duke and Duchess and how they face the tribulations of their past in London. I liked how their love for each other doesn’t happen right away. It’s not a flick of a switch. It is slow, yet powerful progression. Be patient. Their love starts with the union of two bodies and when they begin to acknowledge their need for each other… they leave us to wonder: Aren’t promises meant to be broken?