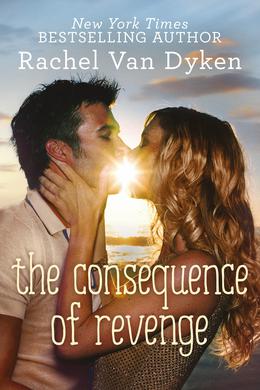 The Consequences of Revenge is the story of the over-confident and persistently directionless Max Emory. Heir to a hotel fortune that’s left him set for life, Max has never really had to work for anything. In fact, there’s no evidence that he’s ever been denied a single thing in his life--except for the heart of his best friend, Milo. When she marries another man, Max is left reeling. He copes the way any wealthy, shiftless playboy with more mouth than tact would; he buries himself in meaningless sex and oft-rejected pickup attempts, all with his groan-worthy one-liners.

Sponsored links
Eventually frustrated with Max’s lack of direction and continuous, ever-escalating pranks, his friends decide to take action. In an attempt to snap him out of his self-pity (and, most likely, in revenge for the bad puns and practical jokes) they sign him up to be the flavor of the month for an upcoming season of The Bachelor. With his (forged) signature gracing an ironclad contract and, frankly, nothing else to do, Max finds himself packed up and headed to Love Island, along with a plane full of hungry, excitable young women.

Becca, on the other hand, is barely scraping her way through school. Facing student debt and a dead-end job, she gets it in her head to win the money--by competing on a popular reality show. But when she finds herself packed off to a remote island, surrounded by scheming competitors and an increasingly ridiculous series of challenges, Becca realizes she’s probably made a mistake.

Facing an absurd situation and some terrifying competition, Max and Becca make a pact to keep each other sane--a pact that they quickly realize is turning into something more. Can they survive the challenges of Love Island and emerge, together, unscathed?

The Consequences of Revenge is, quite frankly, a silly little novel. It’s cute, certainly, but in the oddly self-satisfied fashion of an eight-year-old in a beauty pageant, constantly tugging your elbow and saying “See? See how adorable I am!?” The plot is more than a little ridiculous, the characters larger than life, the jokes free-flowing and more than a little juvenile; while it’s not a bad book, it has more in common with a particularly absurd sitcom episode than most romances. Starting the novel, especially, I found it pretty much impossible to like any of the characters, even Becca, who I think is supposed to be the more relatable foil to Max’s standup comedian. I think I sort of hated them. The guys all sound like Tucker Max stand-ins, especially for the first few scenes, and, with the exception of the two female leads, literally every other woman is a bad stereotype of some kind. It improves over the course of the story--Max manages to, at times, be rather charming--but to get there, you have to work through the challenges of the first act.

It also takes time to acclimate to the way Max talks. He sports an attention-deficit blend of flights of fancy, bad jokes, and casual sexism, punctuated by the odd clever comment. It sounds like Van Dyken just wrote down the content of every Seth Rogen monologue, made it cocky instead of self-effacing, and transcribed it. Also, while it is played up as a punchline, I couldn’t quite get on board with the running joke about Max’s brother having been molested by their friend’s grandmother. The group of friends has a real Jackass vibe, and while I have a group of friends that is exceedingly similar, it’s overdone a bit. Overall, the novel is just too silly to really get emotionally involved with. The vast majority of the humor is juvenile and overly self-aware, which hides some legitimately funny zingers and running jokes.

It does have some really fun parts, though. I don’t intend to be too hard on it--it’s more a fair warning than anything, as I suspect some readers won’t have the patience for the dialogue or the crudity of the jokes--because it is, overall, an entertaining read. Max does eventually manage to be rather endearing and sweet, while Becca is generally sharp and funny; the plot itself is a pretty excellent sendup of dating shows, though. The cheetos-orange producer, the insane contestants, the ever-increasing ridiculousness of the challenges, were all hilarious and on point.

All in all, if you’re looking for sweep-you-off-your-feet romance and soaring tales of epic lovemaking, The Consequence of Revenge probably isn’t your novel. If you don’t mind a few hundred pages of sometimes stupid jokes and a book that doesn’t take itself seriously, Max and Becca are a good bet, and not a bad way to giggle through an afternoon.