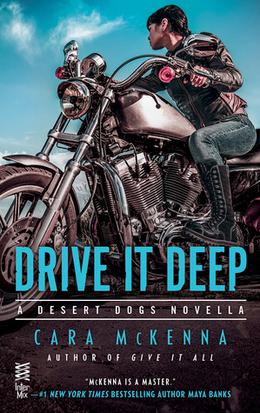 Cara McKenna’s Drive it Deep is a prequel novella to her popular Desert Dogs series. Before casinos encroached on the quaint and quiet town of Fortuity, before Lay it Down and Give it All, there was just Raina Harper, Jeremiah Church, and a sleepy little bar named Benji’s. Raina and Jeremiah (nicknamed “Miah”) grew up together. Raina has just inherited Benji’s, the town watering hole, from her recently deceased father; Miah is running the Three C ranch while his dad recovers from a recent hip surgery. They’ve watched each other, and their group of friends--self-dubbed the Desert Dogs--as they left childhood, endured the bumps and potholes of their twenties, and, these days, begin to find themselves as adults. New roles, new concerns, new responsibilities have shaped them all.

Sponsored links
So it’s unsurprising that, all of a sudden, Miah sees something different in the girl next door. Raina’s a woman now, self-possessed and well aware of exactly what she wants: a far cry from the scrappy little thing that was always tagging along when they were kids. Miah, in turn, has outgrown the reticence he had when he was younger, the nerves that kept him chasing girls who were quieter, less wild. For the first time in their whole lives, Miah and Raina look at one another over the counter of Benji’s and see something exciting. Something arousing.

So begins Drive it Deep, and Ooh. Oooooh. I like this one. It’s a perfect cocktail: sexy cowboys, protagonists who are old enough to actually have some character, a romantic conflict that’s very, very real. I won’t delve too deep into specifics, but suffice it to say that this isn’t some inconsequential divide. Too many romances rely on barriers between their protagonists that, in all honesty, could be resolved with a frank talk or a quick phone call. The actual romantic conflict at the heart of this story is the sort of thing that we’ve all dealt with, at one time or another. Raina and Miah have a divide that’s as deep as it is intriguing. What do you do when the chemistry is perfect, but your goals just don’t align? Is it worth it, when you’re running against the clock? Do you cut and run, or stay to see what happens?

The fact that Raina and Miah are both in their thirties by this point makes it that much more compelling. We’re not dealing with a couple of horny kids who haven’t even had the chance to figure out what they want yet; they’re both adults, who know exactly who they are, who have played this game before and don’t have the patience for any romantic flights of fancy. Oddly enough, that actually makes it more romantic, in my eyes. A guy that has just barely finished stumbling through puberty can promise you the moon and the stars, sure. But he barely knows what that means. A man--a real man--who has loved before and has the maturity to know what that means, what it really takes to keep that alive? Sex on a stick, baby, because he’s keeping his promises. Let’s not neglect Raina, either. It’s one thing to see a girl get swept off her feet; it’s another to see a woman stand firmly on her own two and demand the respect for her dreams, and her boundaries, that she deserves.

Plot technicalities aside, Jeremiah Church is just sexy. Yes, he’s the antithesis of everything I’m normally attracted to: a settle-down-quick family man, a conservative guy who’s happy spending his whole life in one town, the quiet, responsible one. But he owns it, and he’s quirky enough to be totally endearing anyway. He’s sex on a stick in the boy-next-door sort of way. Raina is, of course, phenomenal. I will always be energetically in favor of a smart, capable woman who knows exactly what she wants and knows what not to compromise on. Plus, as a no-nonsense bartender slash tattoo artist slash general badass, she really speaks my language.

Drive it Deep is a fantastic romance. Of course, if you’re familiar with the Desert Dogs series, the novella lacks a certain amount of suspense--but as a standalone story, it’s great. Wonderful, real, and raw. That being said, as a standalone story, it’s one hell of a cliffhanger. I wouldn’t say that you should avoid it, but if you plan on picking it up, be prepared to immediately start reading Lay it Down, because you won’t be able to live with the suspense.