Ever After (Nantucket Brides Trilogy #3) by Jude Deveraux 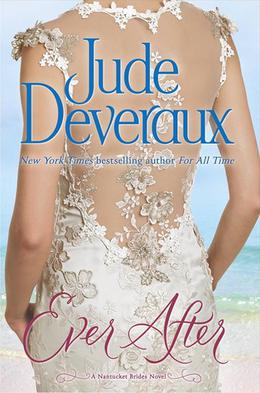 Jude Deveraux’s Ever After is the latest instalment to her Nantucket Brides series. I’ll admit: I saw the cover adorned with a lacy wedding gown, saw the title, and sort of assumed this was going to be a wedding-obsessed, flighty, vapid sort of a novel. Thankfully for my patience, Ever After, as the title may indicate, is just a freshening-up of the Cinderella story we’re all familiar with.

Sponsored links
Hallie feels like she’s spent her entire life catering to her poor excuse for a family. Spending her childhood slung between her absent father, her controlling, selfish stepmother, and her needy, demanding step-sister, Hallie’s been at someone else’s beck and call for as long as she can remember. When Hallie and Shelly’s respective parents are killed in the same car accident, Hallie is left to raise a teenaged Shelly alone--and that’s all before the novel even begins. Still, she manages to make herself a life. After years of work, Hallie is finally on the verge of starting her career in earnest. She’s got a promising new job as a physical therapist, Shelly should be out of her hair soon, and who knows? With any luck, she’ll finally catch the attention of the long-coveted boy-next-door, Braden.

That is, until discovers, all in one day, that she’s inherited a house in Nantucket, Shelly has tried to steal it by impersonating her, and on top of all of that, she’s already got a client waiting for her. In her new house. In Nantucket. Before Hallie can figure out which way is up, she’s on a private jet with a famous architect, headed towards a future she never could have imagined. The best part? Shelly, in all her deceitful glory, is nowhere to be found.

Ever After is sweeter than a basket of kittens and sugar cookies. (Note: do not put your sugar cookies in your kitten basket. They will wind up covered in cat hair, or you will have extremely hyperactive kittens.) It’s like A Little Princess meets Pride and Prejudice, except that now that I think about it, both of those books leaned heavily on charming, thoughtful (if aloof) male authority figures, and all the adult women were awful. Ever After sort of does the same thing, except that Hallie’s now-departed dad was pretty useless, and there are plenty of interesting, strong women to go around. As Cinderella stories go, it at least manages to make sure the heroine isn’t the only female we meet that we don’t have an intense desire to strangle. Overall, the story is almost too saccharine. Thankfully, it’s saved by a tart sense of humor and a heroine who takes care of herself first and foremost.

Hallie’s “Cinderella” is a sharp and no-nonsense young woman with a wicked sense of humor, despite her troubled background; an excellent complement to Jamie Taggart’s Prince Charming, who I was relieved to discover had just as much substance as he did style. Jamie, all in all, is a fantastic male lead. Charming without being irritating, troubled but not pitiable. While his backstory is complicated, sad, and slow to unravel, and there’s a certain amount of “pretty lady helps pretty man get back on his feet,” (har har) he’s never presented as being fixed by her. One can help people, and those people can grow or change, but they cannot simply be repaired like a broken dishwasher. It’s an important delineation, both in the story and in life.

Hallie has a similarly troubling backstory, but while this story may seem to be about Jamie and his demons, at its heart, the novel is really about teaching Hallie to stand up for herself. Because, thankfully, while there’s certainly a handsome man floating about, and he does the requisite amount of feet-sweeping, Hallie overcomes her obstacles primarily with her own moxie and the help of other women. Especially a very mischievous, very dead pair of women.

Those two lovely lady ghosts oblige us by playing the role of Fairy Godmother, adding a subversive touch of creepiness to the whole affair. Yes, they are nice ghosts, but still, a touch spooky and definitely meddlesome. They were unabashedly my favorite part of the book. I’m a sucker for all things macabre or a little dark. While the matchmaking sister ghosts had the best intentions, there’s something a touch ghoulish about doors locking and unlocking at will, disappearing food, tea that never gets cold--like a gothic novel about a haunted mansion, just before the actual bad things begin. I loved it.

The sex is more sweet than steamy--much like the rest of the book, it’s more of a “snuggle up and sigh contentedly” affair than an “immediately excuse yourself because oh look, you’re incredibly aroused” experience. It’s not that the men present aren’t ridiculously sexy, or that the sex is terrible; it’s that it’s gently glossed over, paying more attention to the intimacy of the thing than the mechanics of it. Not exactly wank material, but fitting with the tone of the rest of the novel.

I very much appreciate Deveraux’s refusal to really make anyone a villain; there are people in here who do stupid, selfish, thoughtless things, but no one is really a “bad guy,” and everyone gets a happy ending. I will say that there are a couple of mini-twists at the end that, depending on your personal level of mushiness, are either going to be almost too much or just right. If you cry at Jane Austen movies, you’ll love it. If you don’t, well, maybe go find a less soft-and-fuzzy novel. I should mention that there’s one important central conflict that never really gets resolved, which felt a little odd, but I’m hoping that’s an intentional set-up for later work. Overall, I enjoyed Ever After. While it doesn’t tread any new ground, it does a good job with a story we already know, in a way that’s sweet and a little sexy. An excellent read for a hot bath, a fuzzy bathrobe, and exactly two glasses of pink champagne.