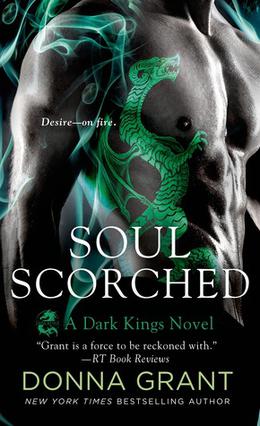 As I believe in being completely up front, let me disclose this straight off; I am not a paranormal reader. I’m not super into dragons or fae or vampires or werewolves or whathaveyou. I flirted with vampire romance briefly in the wake of the national Twilight nightmare we were all caught in for a while, but decided that sex with supernatural beings just did not get me going.

Sponsored links
That being said, I can tell that Donna Grant is incredibly good at what she does.

If this is your world – especially if you have read the previous five books in this series – then dive right in. I think you’ll love it!

For any of us who are diving into this sub-genre for the first time, I’m not sure I’d recommend this one as a starting place. Since this is not my normal parlance, getting into the book was tricky. Grant claims these stories are stand-alones, but I actually disagree with that. As I read through the story, I often felt like I had stumbled into a world I had no knowledge of. There are a lot of sub-stories woven through this novel that I know connect to previous stories and future stories. If I was an avid reader of this series, then I am sure this would delight me and serve to make me more immersed. As a newbie, it only served to often take me out of the story. I found myself reading reviews of previous books to try to grasp some of the characters and their histories and if these were things I was supposed to know or if she was presenting new information.

Thus, I would have appreciated a brief intro to her world before she launched into the story. I was lost for the first few chapters until I got my bearings. I am sure this will not be an issue for fans of the series or the sub-genre, but I am a little slow.

I read in an interview posted here at RaS that Grant envisions this world as one which was ruled by dragons and then humans showed up, generally ruining everything. (Don’t we always.) Dragon Kings learned to shift between human and dragon as it suited their needs. Of course – and this should surprise no one – the two species could not *really* co-exist that well. Drama happened, both between species and within the Dragon community and now they generally operate apart from each other.

There are druids and faes in this world too and special significance placed upon the Isle of Skye as a stronghold of ancient magic. Sidenote: this I buy. Anyone who has ever been to Skye speaks about it in reverent and hushed tones and it would not surprise me if the Druids power was drawn from there.

Plot is as follows: Darcy, a Druid who makes a living reading palms in Edinburgh, has gotten herself in the middle of an internal Dragon King struggle, which now means her life is in danger. Enter Warrick, a Dragon King, who is charged with her protection. It appears that Darcy had, three years previously, helped another Dragon King, Ulrik, get some of his magic back because it had been taken from him by the other Dragon Kings since he was shady. This help has put evil things after her and made her suspect to other Dragon Kings, even though they know she needs protecting.

There’s also a whole lot about a Light Fae named Rhi who I either wanted more from or nothing at all, since her story was not completed and thus took space from the romance between Darcy and Warrick. Rhi is a super compelling character, but what of her that appears in Soul Scorched is clearly only a snippet of her.

I struggled with this review, chickens. I want to be fair to Grant, who I can tell is very good at this genre. I also wanted to be fair to any of you who are eagerly anticipating this installment and for whom this subgenre is book crack. However, as I said, this genre doesn’t really work on me. Additionally, this simply isn’t a stand-alone book. It is so clearly written as a chapter in a larger book and that is wonderful but also stressful.

So, if you guys are readers of this series, would you mind commenting so we can talk about it? And perhaps you can provide some further guidance to fellow folks who are readers of the Dragon King world?