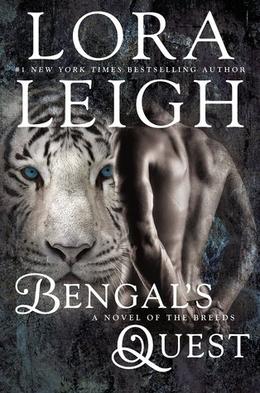 As I think about the book Bengals Quest by Lora Leigh, many different thoughts swirl through my mind. Thoughts of wonder, thoughts of utter confusion, thoughts of intrigue, thoughts of annoyance and to borrow a popular term from the book… it just left me with “crazy ass” thoughts.

Sponsored links
We first meet our hero and heroine rather early on in their lives. It is at an underground genetics research facility where eleven year old Graeme/Gideon/G had been taking care of a newborn creation of Science, Cat for years. When Graeme deserts Cat later on in life, he leaves her heartbroken and lost. Fast forward many more years and our story begins with the hidden, virgin, feline named Cat (a.k.a Claire and Catrina) becoming restless and beginning to mature. She is human, but also a tigress and when Graeme comes back to her their love/hate, creator/creation, animal/human love story begins to unravel and unfold. Their animalistic passion for each other is as visceral and as primeval as it gets. With all the heightened senses there is something completely erotic about claws scratching through skin and the, pure animal instinct and carnal need.

Now, this is the part in this review where I admit [Takes a deep breath]…where I come out with the truth. Before reading this book, I was a Science Fiction meets Romance Genre virgin. Yes it’s true; this is my first Science-Fiction/Romance novel that I have read. Of course I’ve read Science Fiction and I’ve read Romance but never together. Why not? I’m not exactly sure. The only answer I can think of is that I am pretty much a realist. The closest I have ever really come to reading anything with werewolves or vampires would be in a book where there are just really bad metaphors or where characters are dressed up for Halloween. I don’t usually choose books with anything that looks remotely Twilight-esque. I know I am probably one of the last people on earth who hasn’t read them, but there is nothing wrong with going out of your comfort zone… so why not read Bengals Quest…it is part of the very popular Breeds series, so it must be good right? Ugh… I just don’t know…

As I began to read, I was already thrown through a loop when I read that these books focus on characters who are NOT shifters or werewolves. (WTF are shifters? This was one of the many new terms, I had to Google…). So I learned that Leigh’s imaginative characters are experiments in genetic engineering designed to be super soldiers and lab rats for terrifying drug therapies and research purposes. Okay, sounds interesting… kind of sad, but interesting nonetheless.

I was grateful for the Breeds term glossary at the back of the book. I relied on it to figure out who the Genetic Councils were or to learn what a nano-nit is. There is a part in the book where the narrator explains that understanding science has never been Cat’s strong suit and that she even gets confused by it. I had a good laugh reading that because if felt like they were talking about me. I guess that is the ONE thing that I have in common with a tiger-human.

In terms of the plot and even with some of the characters there were just some things I didn’t get. The whole time I was reading the book I was asking myself, “did I miss something?” I constantly felt like I needed to go back and reread but I didn’t even know what chapter to go back to. I am an educated individual, I have two university degrees and I just missed parts of this book (or they missed me?). In every chapter there are so many characters that come and go and they all have more than one name given to them. They all have different yet similar animal/human qualities and descriptions and this became confusing for a newbie. I almost felt like I needed to write down their names with point form notes beside them to keep track of them and to try to figure out their purpose or intentions.

It wasn’t just the Sci-fi terms or character descriptions that annoyed me. I became bored by the repetitious conversations and dialogue between Cat and Graeme. How often do we have to read about Cat not trusting Graeme? Or reading about how he controls her/how he needs her/how he created her. All they do is fight and have the same conversation over and over again. He’s her Alpha; she doesn’t want him to be or tries to fight destiny. We get it. Let’s move on.

Gideon/Graeme is an interesting hero. It is kind of cool how he is able to blend into his surroundings and take on different identities. What I didn’t like is that fact that he took care of Cat like a brother and created her like a father… so why does he want to f*** her? Yes, I know this is about animal dominance and submission and that he is the alpha male in this relations but when he constantly calls her “baby” and “my little cat”, during the sex scenes, those words just turned me off. When Cat tells him that she believes he created her with the sole purpose for her to love him and to long for him, he retorts that he wished he could have made a code for her to obey him. With so much emphasis on mating and the lust the two have for one another the human to tiger descriptions were enough any father/daughter connotations were not necessary.

I can’t say that I liked this book because I didn’t as a whole. But I didn’t hate it either. I just don’t think that this is a stand-alone book. Maybe if I read some of the other books in this very popular Breeds series I might gather more information and change my mind. Perhaps a little more Sci-fi/romance education could make me a convert and even a fan. If and when I read this book again, I will ignore the repetitive dialogue and try not to read the sex scenes with a feminist lens. If I read this book again perhaps I will enjoy it more the second time round. As you know, our first time isn’t always the most pleasurable…right?