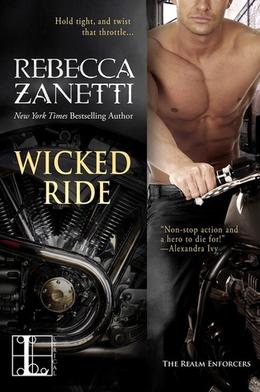 Wicked Ride is the first instalment of Rebecca Zanetti’s new Realm Enforcers series, and boy, does it live up to its name. With an engrossing plot, excellent characters, and a liberal helping of steamy sex scenes, Wicked Ride is a sure bet for any fans of supernatural romance.

Sponsored links
Kellach Dunne doesn’t much like Seattle, but he’s on an assignment--and while he commands respect with his status as an enforcer, he’s not about to question the decisions of his king. A dangerous new drug is spreading rapidly through Seattle’s underbelly, and while the users are human, Apollo--the name favored by the junkies who all too often lose their lives to it--is targeted at another species entirely. While it gives humans a cheap high with some fantastic special effects, the substance is deadly to the immortal witches, vampires and shapeshifters that are Kellach’s bretheren.

What Kellach couldn’t have anticipated, though, is the petite, blonde Alexandra Monzelle, a member of Seattle P.D. who is as dangerous as she is beautiful. Alexandra, who prefers to go by Lex, is a tough, no-nonsense detective, ruthlessly efficient, if a little humorless. She’s hot on the trail of a dangerous new drug that’s leaving behind an unprecedented number of bodies, and she won’t rest until she tracks down the source and supplier, eradicating “Apollo” from Seattle’s streets once and for all. An ambitious goal? Certainly. But Lex didn’t get where she was by being timid.

So when her investigation throws her and Kellach into each others’ paths, neither of them is particularly pleased. Kellach views Lex as a dangerous distraction; she sees a criminal, if criminally attractive, member of one of Seattle’s most notorious biker gangs, one whose ties to the mystery drug are as undeniable as they are incriminating. Of course, blissfully unaware that they are, in fact, the two leads of a romance novel, the two have no idea how deep this new connection will go.

If you enjoy supernatural romance, you’ll like Wicked Ride. The plot is rather fun, full of little twists and engaging characters. That being said, I don’t know if it concludes as tidily as one might wish; we’ll have to wait and see where the next instalment takes it. My only bone to pick is that Alexandra’s daddy issues are possibly a little too on the nose, and they do at times get a touch tiring. (Yes, dear. You hate criminals because of your dad. Thank you for spelling it out! Again!) Still, we’re given a good cast of characters, and an overarching mystery that actually manages to throw us a couple of surprises. The writing is solid, as well. While Zanetti throws us a lot of mythology as we go along, it’s fairly easy to keep up. I mean, it’s fairly standard mythology--shapeshifters, vampires, magic, etcetera, but every writer puts their own little twist on it, and new readers won’t be left scratching their heads.

Alexandra really stands out. She is a ridiculous pain in the ass and I love her. She’s stubborn to the point of stupidity more than once, has irritatingly black and white morals, and isn’t at all sure she wants to be swept off her feet by this annoyingly attractive Irishman. She gives as good as she gets, and it’s nice to have a lady who doesn’t need saving. Yes, some saving occurs, and they do mention her fragility more than I’d like, but overall she’s a pretty capable, badass lady. I am, of course, all about it.

And oh my heavens, that attractive Irishman I just mentioned? He may start out sort of disconcertingly neanderthal-ish, but Lex fights hard to win his respect (and yeah, his heart and stuff, but, like, whatever, mom, gawd.) Their whole dynamic is wonderful, because they believe in each other, but they’re both alpha males, in a sense. Neither is used to not leading the pack. They have each come to expect unerring obedience, to have their orders followed, but of course, that’s not how relationships work, even when you’re the top dog. Watching them fight for control, even as they learn that it’s important to let go and follow now and again, is great.

Speaking of fighting--the sex is so goddamn sexy. SEXY. UGH. I was a little taken aback by the mechanics and implications of “mating” (you’ll see what I mean), but man. These two take trips to pound town that you will be happy to hitchhike along for. Also, total props to Lex for her classy and classic “no you may not put your happy stick in my joyful place unless it is properly packaged, thank you.” I am all about ladies who are safe and don’t take any guff about it. Every time they tackle each other, it’s solid, sexy gold. Go team!

All in all, Wicked Ride is a solid, sexy little book. If you’re a fan of supernatural romance and borderline combative sex, I recommend that you go pick it up.