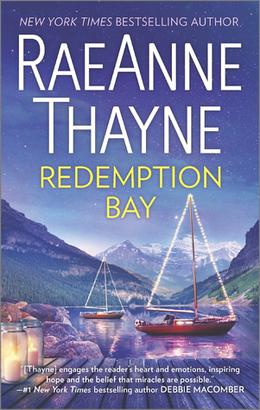 Redemption Bay is Raeanne Thayne’s second book set in the fictional mountain town of Haven Point, Idaho. With the healing blue waters of Lake Haven running into Hell’s Fury River it is quite obvious that renewal is going to be the focus of the book and the end result. The squeaky clean novel follows the book, Snow Angel Cove and the story of Aidan Caine falling in love with his wife-to-be, Eliza. The two characters do appear in Redemption Bay and fans of theirs will enjoy snippets of their wedding, but the main characters in this book are Ben Kilpatrick, Aiden’s best friend and the feisty town mayor, McKenzie Shaw.

Sponsored links
Thayne writes stories of “hope, healing and heart.” If that is what you are looking for in a book, you will like Redemption Bay. Even though a lot of people in Haven Point have hit rock bottom; they hope for good times in store. They put their hope into McKenzie and you will too. In a time where you turn on the news and all you hear is doom and gloom, it is nice to see a town pulling together to save each other from natural and economical disasters. This book is relevant to our time.

Redemption Bay is primarily, McKenzie Shaw’s story. She is a very determined businesswoman. This too-busy-for-love kind of girl runs a small flower shop and also the town of Haven Point. Originally from California and named, Xochitl Vargas by her Mexican mother, McKenzie was brought to Haven Point as a young girl, after her mom died. Thrust into a new life with a father, step-mother and sister (who had all just found out about her), she quickly fell in love with the town and assimilated into Haven Point life. Now as a young mayor, McKenzie has the difficult task of revitalizing the struggling town. Ever since Ben Kilpatrick closed his father’s killy boat making factory, jobs have been scarce in the quiet town, much like many towns today. McKenzie will do her utmost to change that and redeem her town. I admired her persistence.

Ben Kilpatrick is not a stranger to McKenzie. When she was a teenager, she developed a massive crush on him when she used to go visit her dying best friend (his sister Lily). During these visits McKenzie noticed how caring, how gorgeous and how sad he had become. But as an adult and ever since he ruined the towns-people’s livelihood she no longer sees him as the perfect man; she downright hates him! All of a sudden, there are rumours buzzing around town that Ben Kilpatrick and Aidan Caine’s might choose Haven Point as their next place to build their Tech business. Mayor Shaw puts her past emotions aside to woo Ben for business…not pleasure.

I liked that Thayne took time to layer her characters and to outline their past. The hero and heroine both have had sisters battling life threatening diseases (Ben’s sister, Lily died of cystic fibrosis and McKenzie’s half-sister, Devin survived cancer). Both experienced emotional abandonment by a parent (Ben with his father Joe, and McKenzie with her step-mother Adele). They both even share the uncommon experience of learning to deal with earth shattering news that they are the products of two secret, love affairs. It only makes sense that these two workaholics will finally come together and that they do! I enjoyed how McKenzie goes from loathing everything to do with Ben Kilpatrick to loving every part of him.

I must admit, I feel conflicted with this book because in some ways I enjoyed it and in other ways I just think it could have been so much better. I just liked it. What I didn’t really like is that there is a lack of emotion in this book. When the characters are coming head to head with each other I anticipated an explosion of emotion, but it doesn’t really come.

Example one: the reader knows before he does that Ben will discover the truth of his birth and we anticipate this moment. When his mom, Lydia decides to come clean and tell him the truth about his paternity, the emotions just fall short. She cries and asks for forgiveness and hastily leaves with words along the lines of “call me if you want to talk about any of this again”. Repeatedly Lydia is described as being very classy and nice; so why the sudden disappearance? Why the coldness? She leaves before her son could even answer. To me, this is a little of a cop-out. As a writer, why spend all the time leading up to this climax to not dive in?

Example two: the love affair between McKenzie and Ben. There are many mentions of pupils being dilated as a sign of infatuation and lust, but that is about it. We learn that Ben knows how to kiss a woman; that it is even better than gelato but there isn’t nearly enough description. At heightened levels and climaxes, the emotions just fall short. There isn’t even a sex scene in this book. The July 4th fireworks were more like hand held sparklers. I just wanted more. Why spend all the time developing this love, to not dive in?

More raw emotion, more descriptions and dialogue written at the climax would have made me love this book instead of just liking it. I liked the setting, liked the characters, liked the themes and plot, but didn’t l-o-v-e it. It’s not the kind of book you will fantasize about or put you in the mood, but it’s readable. It’s short and sweet. So, should you add Redemption Bay to your summer reading list? Sure, why not… It is a summer vacation, waiting for a plane kind of read… it passes the time. In Redemption Bay, Ben learns to open his heart to the town, his family and to McKenzie and who knows, maybe you will too.