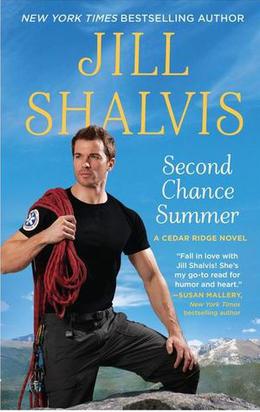 Readers, I think we all know the pleasure of an author we can always trust. The ones where you know that the plots intricacies don’t matter a whit, but that you trust them completely that this journey they’re about to take you on will be good. There are a lot of definitions of good – it can be the perfect level of suspense, the perfect level of BDSM, the perfect level of close-the-door romance, whatever. It’s those authors we pre-order literally as soon as a new book is announced. While I love discovering new authors and findings new worlds, there is nothing to me like the trusted ones.

Sponsored links
Shalvis is one of those for me. I devoured her Lucky Harbor series and generally wished they were non-fiction so I could book my next holiday in that lovely little town. When I heard she had closed out that tribe and was starting to pen another one, I had itchy order fingers. You can imagine my delight when Second Chance Summer not only arrived but was exactly what I wanted it to be.

So, full disclosure, chickens, I was probably always going to love this.

And boy did I.

Second Chance Summer takes place in Cedar Ridge, Colorado, nestled in the Rocky Mountains. There’s skiing and hiking and mountains and all the trappings you’d expect from the setting as well as the delightful cast of characters we can expect from Shalvis. One of the center families of Cedar Ridge are the Kincaids who own one of the local resorts. Current generation, headed by Grey Kincaid is dealing with some truly atrocious decisions made by the patriarch, a guy who is plainly a complete douchecanoe who has abandoned three separated families in fairly quick succession and done his best to screw over all his kids in the process.

Thus, the Kincaid tribe is connected through this absent and awful man – there are pairs of birth siblings and half-siblings but the relationships don’t seem to be super affected by who was born to which mother. There are a few missing members, particularly one named Jacob, that I imagine will be making dramatic reappearances as we progress through the series. (Speaking of progressing, Ms. Shalvis, if you read this, can Jonathan please get his own book? Like PLEASE. I’ll take a novella, but I want that man’s story. Thanks.)

Lilly grew up in Cedar Ridge, but fled to San Diego after a series of traumatic events that made her feel like she had no choice but to start fresh. She’s brought back to Cedar Ridge out of desperation – she’s jobless and homeless and sometimes “home” is the only place to go when one is in that situation. So much to her chagrin, she finds herself living amongst a lot of ghosts – both of those living and passed.

One such ghost is a relationship she left behind with Aidan Kincaide, a prominent member of the local firehouse and the Search and Rescue team. He has never really understood why she bailed on the promise of them and as soon as she’s back, he sets out to pick up where they left off. Lilly takes a bit of convincing in that department, but our man wins her over in the end (clearly, or it has no right to call itself a romance).

Along the way, we get to know the Kincaide family and I am already looking forward to spending more time with them. The next book, as an aside, is about Hudson and all I can say is “yes, please”. They’re rough men who work rough jobs, but man alive do they clearly love deeply. Aidan’s mama, Char, and Grey’s wife, Penny, make the tribe only more well-rounded and inviting. I hope that in the future there is more female-to-female interaction since I think Shalvis writes those well. Also, now that we know Lilly, woman needs some girlfriends.

Finally, let me make this clear; Shalvis never closes the door. I find that to be wonderful, but I know some readers would like less show and tell in that area. The characters feel to me fully human, which means that they’re sometimes crude, crass and illogical. There’s, as my mama would say, poor language in this one – so if profanity is not your jam, be aware. The relationships, however, are authentic. They crackle with all the things we don’t know but they do – the deeply woven histories that humans have with each other that volumes of novels would never be able to fully describe. I don’t need to know why they love each other or all the details of their history – but there is something magical in being convinced in a few hundred pages that two characters are connected at their souls and we should be rooting for their happily ever afters.

The Shalvis hallmarks of witty banter, intimate relationships and well-written sex are all there. Recommended for fans of her other work (clearly) and anyone who loves diving into worlds which are so real, even if they’re not factual.