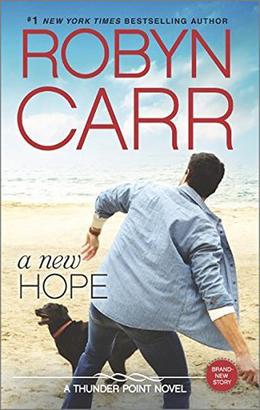 This book about second chances is the eighth book in Robyn Carr’s, Thunder Point series. This book didn’t have me at “hello”, but it had me as soon as handsome, Matt Lacoumette drunkenly made a fool of himself by hitting on our heroine, Ginger Dysart. She reacts by decking him one and sending him to the hospital. This funny and highly embarrassing event is the spring board that starts an adorable friendship and love affair between Ginger and Matt.

Sponsored links
I really enjoy books that are multi-dimensional –no I am not talking about sci-fi time machines (see my review of Bengals Quest by Lora Leigh for that kind of thing). This is a book unlike many other romance books -it has more than one thing happening at a time! We have different characters experiencing hardships, moments of ecstasy and even epiphanies in this book and I loved it! From new marriage, to pregnancy, divorce to new found love; this book tackles it all… and it doesn’t disappoint.

A New Hope primarily deals with the two main characters, Ginger and Matt. There isn’t a lot attention about their looks or meaningless dialogue that we often come across in other romance novels. We learn more about the qualities that make them who they are. This book has substance and so do the characters. We learn that Ginger went from being a young groupie, to a lonely wife, to a happy single mom and when we meet her; she is dealing with a divorce (to a self-absorbed has-been musician named Mitch), and also a grieving mother. Her past has changed her and she has become broken, but amongst all this pain, she doesn’t need the man to fix her. She makes the change herself. Ginger has secrets and she has baggage, but so does Matt. Both are divorced and both have painful secrets they have not shared with anyone. They are multi-faceted characters who have both suffered greatly and have almost given up on life. When they both begin discover each other, they begin to help and inspire each other, but essentially fix themselves.

Ginger and Matt characters are perfectly flawed. There are circumstances and things that make them and their relationship perfect. There is the beautiful and romantic farm setting… their lifestyles, personalities and even their bodies fit perfectly together, yet they still fight and play relationship games (like normal couples). It made me laugh how “mad Matt” has a temper and how immature Ginger gets when she changes her phone number on him. You will fall in love with these two characters because their relationship is realistic and fun. From friends who are afraid of falling in love again to lovers, you will enjoy their phone conversations that go on into the night and later their sexual experiences that also go on into the night. Matt is a cute and rugged farmer and a true romantic. You will be charmed by him and enjoy the mix of romance, drama and fun that is found in this book.

In other romance series, many books predictably start with the heroine and hero from the previous novel getting married… you know how this goes…as soon as the new main characters are introduced the married couple disappear. Yes, this story begins with Peyton and Scott’s wedding, but they are from three books ago (The Promise) and Peyton is Matt’s sister who adds a lot of spice to this book. Fans will love that Grace Dillon, her man Troy and her family from the previous book, One Wish are back and have important parts in this book. We are also introduced to the caring, nurse, Lin Su Simmons and her sweet teenage son Charlie (the characters of the upcoming book, Wildest Dreams to be released in September 2015). It doesn’t matter if you haven’t read the previous books in the series because Carr masterly weaves her characters from her other books in and out of A New Hope and explains all the characters and the plot so well. This is a stand-alone novel, but it also entices you to read all of the Thunder Point books! (I already can’t wait to read the next one.)

You may need a tissue or two when you read this book because it deals with Ginger’s heart wrenching pain. You know the saying about how the English language has the words widow/widower for when a spouse dies but there isn’t one to define a parent who loses a child? There is no way to describe Ginger’s pain. A pain no one could ever imagine. You cannot but help grieve along with Ginger and as she begins to live again, you will begin to really cheer her on -much like a friend would.

This book teaches us a great lesson about hope. From the poverty and fear Lin Su experiences to the worry pregnant, Grace copes with as she watches her mother, Winnie suffer from ALS (amyotrophic lateral sclerosis) there is always hope. I commend Robyn Carr for writing about difficult and taboo themes under the guise of a romance novel. She goes beyond throwing a bucket of ice water over a head like the popular campaign for ALS awareness that went viral last summer. She spreads awareness to important causes like mental health, ALS and sudden infant death syndrome, by giving us a glimpse of how her characters deal with the trials and tribulations. She shows us how they act and react, how they feel and what they experience on a daily basis. She also shows us multi-dimensional characters in a loving community. At the core of this book is friendship and love and even though the characters make you misty-eyed they do not dwell on their sadness. This is a heartwarming book that welcomes you into an already much-loved series. Carr seamlessly immerses her reader into the world of Thunder Point and once you are there, you will be happy to stay.