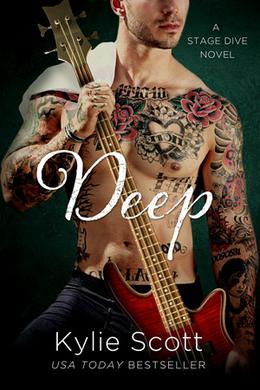 Kylie Scott’s Deep is the concluding novel of her Stage Dive series, which follows the romantic trials and tribulations of the titular band. Think hot, talented rockstars with minor commitment issues being turned by The Power of True Love into doting, if quirky, husbands and fathers. Not exactly landmark material; but of all the novels, I have to say that Deep, while certainly precious, lacks a certain depth of emotion.

Sponsored links
The setup is simple, and tossed at us right from the beginning, so I’m not spoiling anything to give you an outline--boy meets girl, boy and girl do the grownup no-pants tango, and surprise! Boy and girl have just invited someone new to the party. Lizzie Rollins, little sister of Anne Rollins (whose story was featured in Play), finds herself pregnant. Worse, she’s pregnant from the one-night stand she had with Stage Dive’s forbidden bassist, Ben. Doubling down on the terrible is the fact that she and Ben haven’t spoken since their forbidden tryst, months earlier, following Anne and Mal’s wedding. When Lizzie’s secret comes to light, she and Ben have to decide, and quickly, what kind of parents they’ll be--and contend with Lizzie’s deeply disappointed brother-in-law, who had told everyone Lizzie was unquestionably off-limits.

A quick aside, dear readers: I totally understand why rich and famous dudes are such popular subjects for romance novels, and I also understand why unexpected pregnancies are the sort of drama that's perfect for the genre, but the combination of the two really robs the plot of any urgency. "I've been knocked up by a successful and financially stable man and I've already decided I want to keep the baby!" Is, well, not exactly a nail-biter. Of course, it doesn't hurt that the most pressing thing most people have to worry about with unexpected parenthood--that is, money--isn't an issue, since our brand-new baby daddy is also a wealthy, famous musician. “Oh no,” you catch yourself thinking. “You’re either going to have a healthy and stable relationship with the father of your baby, or you’ll have a healthy and financially comfortable, if somewhat awkward co-parenting relationship with the father of your baby. Oh god, the tragedy!” There’s no point at which I really worry about Lizzie. She doesn’t, even for a moment, second-guess whether or not the baby is something she wants; it’s presented as a foregone conclusion, which certainly saps a lot of the drama out of the situation.

Yes, watching her and Ben try to decide if they can make it has its moments, but in a very high school will-they won’t-they fashion that doesn’t exactly keep the reader guessing. The emotional back-and-forth is engaging, but never really immersive enough to feel pressing. Lizzie’s voice is cute, endearing, and very funny, but she’s written so flippantly that even her concerns don’t read as being particularly earth-shattering. I don’t ever get the impression that her feelings for Ben are the be-all, end-all that Scott wants us to believe they are. From Lizzie’s end, at least, it has all the earmarks of a crush: something that’s really crushing in the moment, but easier to shrug off than you realize. As a result, the novel feels short and lacks much of an arc, emotionally and dramatically. A lot of things also come up and simply aren’t dealt with in any satisfying fashion. Ben’s sister is conveniently framed up as a real villain, but her role winds up being more “teenaged mean girl” than anything else. Likewise with Ben’s commitment issues. Scott queues up a lot of conflict, only to conclude it in a rush and without much exploration. Think more "episode of The Simpsons," and less "Pride and Prejudice," in terms of the scale of storytelling.

Of course, the sex is pretty good. I will grant it a whole extra star for wank material. Scott relies pretty heavily on mechanics, but she gets the job done: if you’re looking to have your pump primed, at least a few scenes in Deep should get that taken care of. Although the repeated mentions of Ben’s, ah, heft made me wonder how Lizzie didn’t spend half the novel with a limp and an icepack on her hoo-ha. (Like, girl, we all like a big man wand, but not when it jumps from “hello, big boy” to “beating my cervix like it owes him money.” Ouch.)

This is supposedly the final novel in the series, and to a certain extent, I think it shows. It seems Scott has wrung all the drama she can from her fictitious rock stars; Lizzie and Ben's story, though lacking in certain ways, comes off more as a chance for Scott to bid fond farewells to all of her carefully curated couples, seeing them safely to marriage and parenthood and charming happy endings all-around. The other characters, and other relationships, sort of steal the spotlight, even though we’re supposed to be focused on the new relationship budding right in front of us. It’s just difficult not to wish we were following Mal around again, for example, every time he walks into the room--he’s just so much more interesting and better drawn than Lizzie or Ben, really.

Overall, Deep is a perfectly sweet way to bid farewell to an already successful series, checking in with previously-loved characters in the context of a new story. Fans of the Stage Dive novels won’t be disappointed; but if you haven’t read them before, I wouldn’t recommend Deep as an introduction.