Once Upon a Cowboy (Whisper Creek #3) by Maggie McGinnis 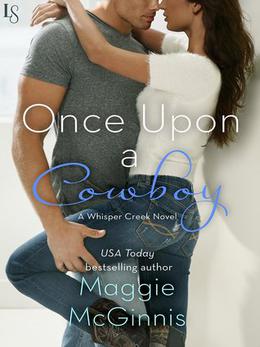 After reading Maggie McGinnis’s Once Upon a Cowboy, I began bugging my husband to consider taking a holiday to Montana, preferably to her fictional ranch spa at Whisper Creek. It sounds relaxing and wonderful, full of delightful people and the potential for adventure.

Sponsored links
The story follows Jessalyn and Cole, one a yoga instructor from Boston and one the cowboy in charge of Whisper Creek’s daily operations. They’ve met on several other occasions when Jess came west to visit Whisper Creek and McGinnis establishes they had a fairly instant attraction. I don’t want to classify it as “insta-love” because it has been apparently several years since first meeting to actual connection, but I get the feeling that if they were the first book in the series and not the third, “insta-love” would totally apply.

From the moment we meet Jess in this book, we know she’s running from something in her past. As she’s climbing in the taxi to head to Montana, her landlord hands her a manila envelope which causes Jess no shortage of trauma. We know that whatever that envelope contains is the source of A Big Awful that she is potentially trying to hide.

The story of the Big Awful comes in drips and drabs throughout the story and I don’t want to go into too many details here. McGinnis takes her time with the revelations – the unfolding made me feel like the revelations of Jess’s past were painful even for McGinnis to reveal. And I’ll be honest – Jess’s past is painful.

In broad strokes, she grew up in one of those towns where little good happens and even if when she wanted to make good decisions, she was pretty hamstrung to. She gets in a relationship with a despicable human being called Billy as an escape from the hellscape that is her home life. The flashbacks are where the “abuse” tag comes in – if you are sensitive to stories where there are references to domestic violence or child abuse, then be aware those form a spine of this story. No abuse happens in the current time, but the abuse informs how she acts and interacts with the present day characters, so knowing what happened is important.

In present time, we have Cole. A very hard-working cowboy who shelved his dreams of medical school to take care of the family ranch when tragedy struck a while ago, Cole is a solid, hardworking guy who is fantastic with children and a bit of an animal whisperer. He is also an expert in getting people scared of horses to be able to ride and feel comfortable. Devoted to his family and very into Jess, Cole is a wonderful romance hero.

I enjoyed this book – it carried me along as the relationships developed and unfurled. However, I did feel like I came along in the middle of a story and it took me a little while to figure out who was connected to who and – I’ll be honest – I’m still not fully sure how the three girls are friends with each other. The boys are talked about more – two brothers and one best friend – but the girls are a bit of a mystery to me. I had to trust that they were as close as McGinnis told me they were – there was simply not time to show me. I am sure that groundwork was done in the previous two books – but as a newcomer to the series, I was unable to reap those benefits.

When we were just dealing with Cole and Jess, I enjoyed the story immensely. When we wandered into the other relationships, however, my interest waned at times. I felt like I didn’t fully “get” the relationships between the larger group of characters. For instance, there’s a bit where Jess is asked to design a yoga studio in the spa. My first reaction was to flip back pages to where we met Jess because I could not remember if she taught yoga or just liked it or what. I like my characters established clearly and it seems that McGinnis let the previous books do that work for her. There was a lot of assumed knowledge I simply did not possess.

However, the writing style and story construction did have me going to my Everest-sized “To Read” pile and throwing the first two Whisper Creek novels onto it. I like how she wrote Cole as a strong, confident cowboy who wasn’t a jerk – that’s a trope wandered into far too easily in stories of this ilk. I liked how she wrote Jess and Cole together, especially after Jess told him all about the Big Awful.

I’d recommend this book for fans of cowboy novels and people who like books that just feel comfortable and homey. This was – in spite of the flashbacks and their contents – a sweet story of a woman finding home in herself and her happily ever after.