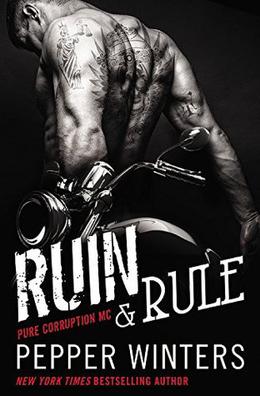 Intense. Arousing. Disgusting. Stomach churning. But fuck me if you will be able to put this book down once you start reading it. Pepper Winters captures all of your emotions as you read through the bitter love story that Ruin and Rule is, and continues to be in your mind and fantasies once you’ve turned the last page.

Sponsored links
The introduction to the main characters Kill and Sarah comes in the middle of a gang battle. Shooting, fist-fighting and all out chaos brings us to Sarah - bound and blindfolded, and Kill, obviously a member of one of the warring factions. Kill sees Sarah lying prone and motionless and stops to untie her blindfold as she is the only one of six female captives not crying or whimpering on the ground. Instead, Sarah’s senses are heightened and she has figured out only the basics of what is happening at the moment. That is - until they lock eyes amidst the whirlwind of destruction around them.

Knows in her bones that this man is important to her and has seen into her soul. Kill sees the same thing in her, then shuts down and carries her off. It is then that we begin to realize that Sarah does not know where she is, or why she is there, or, more startlingly, who she is...at this point she has no knowledge of herself, her name or her appearance. She is an amnesiac captive who only knows she is in a bad situation that is about to become worse as guns continue to shoot and men continue to crumple to the ground around her. And worse it gets, when Sarah is led away by Kill, who is injured, bleeding profusely and is trying to hide it.

Sarah recounts that while blindfolded she is sure that Kill has murdered a man within earshot of her position and that he is some type of leader in this mess. After stitching Kill’s wound, she has the chance to escape, and yet does not, because the pull of her connection to this man, though mysterious, is enough to keep her in harm’s way until she can figure out the clues to whom she might be. I will not give away more of the plot because the story is complex and involved and is the motor and core of this novel. As such, I will only talk about two or three points of the story, hopefully not enough to give the big picture away.

The sex in this book is achingly good. It is about two people, each of whom are holding back, fearful, yet unable to keep their hands off of one another. Their bodies use touch and orgasms to communicate. The lines between fucking and lovemaking are clearly drawn, yet become blurred as they fall deeper under each other’s spells and give into their past wants and needs of each other. This sex is the kind that wrenches your guts out as you wait for them to man up and be honest about what they are experiencing. It is a warped, yet pure incarnation of need and lust and salvation.

The sex is hot and suffocating. Each breathes through the body of the other. Each tries to end their nightmare of suffering through the touch of the other. We are privy to the constant threat of unravelling and destruction around the corner from every glance and touch. This is an intense, smouldering love..with no option of redemption if the other is lost - only bleak misery to be endured for the rest of their sad and lonely existence if they fail to connect.

The criticism of this book comes from two angles. One is from the details of Sarah’s slowly returning memory. She is a veterinarian. Which struck me as an odd choice of someone who is kidnapped (we assume) by a motorcycle gang. But, I guess one has to be something by way of profession and it’s certainly handy that she can suture like a pro. The other criticism is the reason for Sarah’s capture: she was rounded up with a group of women who were snatched to become ‘goods’. White slaves for unknown men. To be sold like cattle by the human traffickers we find out the Pure Corruption Motorcycle Club have become.

This is a vastly difficult situation to stomach, as a woman reading this novel. On one hand is the fantasy of being held captive and being forced to have sex with a super hot man with a secret heart of gold is an old trope of the romance world. So when we find out that Sarah will be saved from this fate, we breathe a humongous sigh of relief - until we realize the sale of the others is still going through...then the bile starts to churn.

What can Pepper Winters be thinking you’ll ask yourself - and thats when you hit the end of the book and realize that this is only a part one. The greatest gift she gives as an author is the promise and preview of a sequel to the action and passion of this Pure Corruption Motorcycle Club book, where you just KNOW that there has to be a plausible and life-saving ending to these women’s fate. The preview of the next installation called Sin & Suffer - Pure Corruption Motorcycle Club, just made me want to kick back and read on forever.

I was dying to find out what could possibly happen to save this doomed twosome of Sarah and Kill. What would happen to the women sold into the world of white slavery? Could Cleo possibly live with herself knowing that a woman - even a woman who had made bad choices - would live out her days as property to a man? And what of Kill? How could the dangers and brotherhood of a motorcycle club stand in line and balance his life as a wealthy wall street trader (also a somewhat corny plot line, but go with it) who liked to break faces when those around him didn’t comply? And what of his mysteriously manipulative mentor who was still in jail?

Ruin and Rule is a hard, gritty romance to read. It deals with harsh lives and even harsher people. Thankfully, most of us live in somewhat (and hopefully vastly) differing circumstances, but each of us has something dark lurking at the edges of our lives. Pepper Winters gives us the chance to skirt with the reality of that darkness, but in an entirely safe way. Pepper Winters does the unthinkable - she takes a somewhat cheesy premise of a motorcycle thug turned do-gooder who finds his lost love, and turns it into something interesting and captivating.