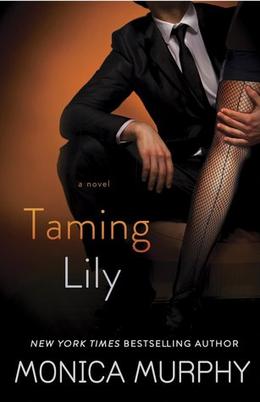 Monica Murphy’s Taming Lily features the titular Lily Fowler--party girl, socialite, heiress of the famous Fleur cosmetics company, and, most unlikely of all, amateur hacker--caught up in a web of corporate espionage and personal vendettas. Lily is the Fowler family’s black sheep, more of a party girl than a worker bee, less interested in the company than her two sisters, Rose and Violet. Where her two younger siblings work for the company, happy with their men and Rose’s upcoming baby, Lily has been happy enough to play the bad example, winding up in the tabloids more often than not.

Sponsored links
Lily’s playgirl images belies a quick intellect, though, and when her father’s new girlfriend, Pilar,  seems to be up to no good, Lily can’t help but investigate. It’s not long before she discovers Pilar’s secrets; secrets that the ruthless woman will stop at nothing to protect. Backed into a corner and unable to turn to her father or her sisters, Lily flees for Maui to regroup while she calculates her next move--but unknown to her, Pilar is already two steps ahead.

Max may have a bit of a dark past, but he prides himself on being good at his job. As a former military man, Private Investigator work is a natural fit; so he thinks nothing of it when a woman hires him to retrieve a stolen laptop. Even better, the subject has just fled to Hawaii. Paid vacation in the tropics, following a beautiful woman? Who wouldn’t jump on that? Of course, when Lily nearly drowns in a rough tide, Max isn’t going to just let her die--and once contact has been made, they find themselves heading down a dangerous path. Gentle but dominant Max is exactly what Lily has been waiting for--and the first man she’s met that’s worthy of leaving behind her party-girl lifestyle. But can they make it work?

Really quick: I guess the “dangerous man sent after woman for corporate espionage reasons” was a more common plot than I realized? I have no objections, but it’s funny to me that it’s a thing. Also, I did not realize that “incredibly hot wealthy girl who is also secretly a brilliant hacker” was a new trend? I mean, I get it, but does anyone else feel like that’s kind of a weird addition to the ever-growing list of Romance Novel Tropes? Once again, I’m not complaining, but it sort of made me giggle that these are becoming trends. Last: Congratulations, Murphy, you made me desperately long for a holiday in Hawaii. I hope you’re happy, and also willing to buy my plane tickets. I’ll be waiting.

Lily and Max, overall, are just wonderful. Max is a good blend of dangerous, dominant and surprisingly fragile. For every grunt-heavy “I just want to own her” declaration, we get a balancing “I just want her to love me!” It’s nice because it keeps it from veering into creepy-land. Watching their relationship grow, falter and then find its footing is awfully sweet, and you can forget from time to time that there’s a DARK SECRET waiting to TEAR THEM APART, which is perfect--you want to forget, and get caught up in it, and then abruptly be reminded. You want them to succeed, and objectively you know they will, but there are good, obvious reasons why they couldn’t. Lily and Max have to meet in the middle, and not just because Max has been hired to steal something from her. This, kids, is how suspense works.

The sex, by the by, is phenomenal. The dirty talk is pretty good but occasionally stumbles into “oh god, please shut up and get back to the SEX” territory. They have all of the sex, all of the time, and it’s dirty and sweet and everything you could ask for. From a genre written by and for women (at least that’s what we’re told), this shouldn’t be a surprise; but it is, and a pleasant one. Their connection is tangible, and as a result, absolutely arousing. I could “watch” these two people bone for days. Murphy, the challenge has been put forth: straight up Max and Lily erotica. Let’s do it.

I have to admit that I found the ending a little too tidy. Maybe it’s because I’ve read too many of these things, but I kept expecting the villain to pop up and try to assassinate everyone or something. This thankfully did not happen, but I will say that it felt too easy, somehow. Murphy spent all this time emphasizing how terrible this person is, so when they’re dealt with within a couple of pages, it feels a little anti-climactic. Still, as hurried novel climaxes go, it’s not completely beyond the pale, and at the rest of the novel more than makes up for it.

All in all, Taming Lily  is sweet, fun and eminently readable, despite a couple of small flaws. Max and Lily have good chemistry; and despite the barriers, their relationship is delightful to watch. While the plot itself is reminiscent of a lot of other novels I’ve seen, I thoroughly enjoyed myself, and I think other readers will too.