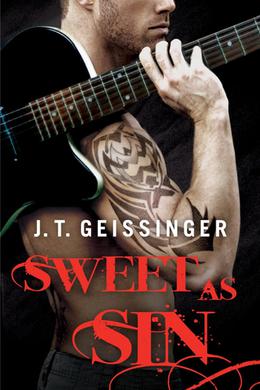 Geissinger’s Sweet as Sin is the inaugural book in the Bad Habit series. It’s got all the trappings of an edgy romance: rock stars, raw relationships, plenty of sex and a heap of dark secrets that play out slowly through a dense, action-heavy plot. For fans of hopeless, semi-self-destructive romance, the Bad Habit series is gearing up to be a must-read. The more faint of heart, though, may decide to give this one a pass.

Sponsored links
Kat Reid, our leading lady, more or less has her life together. She’s a Hollywood makeup artist, catering to the rich and famous on movie sets and photoshoots, wrapping up her days with margaritas and girl time. Things haven’t been easy for Kat, but she has good friends, a decent head on her shoulders, and the will to put the past behind her. From here on out, she’s all about smart decisions and smooth sailing. Things are finally coming up Kat, and she isn’t going to let the world kick her around again.

When she’s called in for an important gig, though, Kat quickly finds herself out of her depth. She’s used to famous people, their vagaries and vanity, but Nico Nyx--lead singer of the incredibly famous rock band Bad Habit--throws her off her game entirely. He’s sex incarnate, as far as Kat’s concerned, and he makes it difficult to think, let alone focus. Worse, the shoot is ruined before it even begins when the model playing Nico’s “bride” for the video shows up too intoxicated to do her part. Before she know’s what’s happening, Nico volunteers Kat to take the model’s place.

It doesn’t take long for Kat to realize that she is falling hard for this dark, brooding rock god. But Nico is more than sexy; he’s dangerous, and damaged to boot. He seems to care about her, but is it enough? Can they find something real in the false glitz and glamor of celebrity life in Hollywood? Or was it doomed from the beginning?

Sweet as Sin isn’t a bad read, but please believe me when I say that it is intense, and not just because the sex is so good. First and most importantly, Kat and Nico’s relationship sort of gives me the heebie-jeebies. Geissinger is trying to give us something that’s raw and vivid. I get that. It is certainly both of those things. It also frequently veers into territory that borders on being uncomfortable, though. Nico’s possessive, super-intense, semi-controlling demeanor is less sexy than one would hope, and Kat’s insistence that they “communicate” best when having makeup sex is just odd. She’s continually trying to have normal conversations about normal relationship things (“hey, are you hiding some sort of super-dark, destructive secret that could put me or my loved ones at risk?” or “hey, that thing you just did was super creepy and not a normal way for adults to behave, can we talk about it?”) but every time she does, he a) refuses to talk about it at all, b) accuses her of trying to “run away from him” because she’s expressing her doubts, and c) semi-forcibly has sex with her.

There are seriously scenes here where Kat’s mental narrative boils down to: “Please stop touching me. I really want you to stop touching me. I am going to hit you if you don’t stop touching me. Just kidding, never mind, I am totally into this now.” It’s weirdly infuriating to read at times, because she moves on and decides she’s into the sex before the audience can catch up.  Objectively, you know this a sexy and well-written sex scene, but the leadup leaves you so tense that you can’t relax and enjoy it. Are they actually going to resolve their issues? Are they going to fight again because he decided to manhandle her despite explicitly being told not to? That isn’t consent. Is that okay? Is this one of those novels where non-consent is okay? Then why was she yelling about consent!? It creates a dissonance that can be difficult to move past. The whole dynamic is obviously meant to be raw and dangerously sexy, but a lot of it misses the mark.

The actual plot was done well, but good golly, Miss Molly, that nonsense was dark. I’m pretty sure it covers all of the trigger bases. I don’t want to assume, but some part of me is wondering if, tucked away in a desk drawer somewhere, Geissinger has a Trigger Warning Bingo Board. Way in the back, right next to the inspiration flask. (What, you don’t have an inspiration flask? Don’t lie to me.) I’m not saying it’s bad, or ineffective. It’s just a lot. Every time you think you’re going to have a chance to relax, Geissinger ends a chapter with a sentence like, “everything was going to be okay. Little did we know that everything would shortly be ruined forever.” On the plus side, this makes it a hell of a page turner. Still, there’s a fine line between a romance that’s gripping and one that’s just needlessly stressful. Which side of that line Sweet as Sin belongs on is going to depend on the reader, I think.

Overall, if you’re looking for something dark, broody, naughty and a little bit violent, Sweet as Sin will hit the mark and do a pretty good job of it. It’s a lot to handle, but ultimately, I think there are a lot of people who enjoy vicariously experiencing something that’s really messed up. The sex may have some issues, but enough of the scenes hit their mark to provide some decent wank material. If brutal romance is your thing, pick it up--if you prefer gentler territory, though, give this one a pass.