A Virtuous Ruby (Migrations of the Heart #1) by Piper Huguley 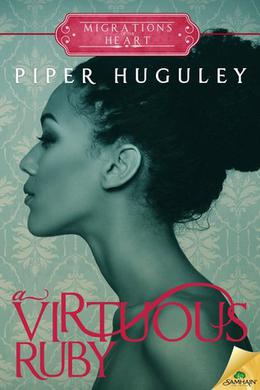 Piper Huguley’s A Virtuous Ruby is a treat. Set in the early 20th century in a small town in Georgia, the story’s main character is Ruby. Her human love interest is Adam, but her other love interest is the town of Winslow. A tireless crusader for equality and justice, Ruby faces no shortage of indignities and abuses throughout the story. At first, Adam is skeptical of Ruby’s vim and vigor, seeming to think she may be over exaggerating the town’s imbedded racism. As the story progresses, he learns he’s wrong and she’s right.

Sponsored links
Hughley’s work is about people of color, but as that is not a phrase employed in the middle of nowhere Georgia before WW1, that’s not how she refers to people in her narrative. Choosing “Negro” as the predominant word means that Huguley plunges us readers into a world that may be foreign to us but one fully worth visiting.

I would hesitate to call this a full romance and instead a gorgeous work of fiction with romantic elements. I say that because I was rooting for Ruby and Adam to find happiness, I was primarily rooting for Ruby. I was cheering her on as she tried to get a local chapter of the NAACP started. I wanted to defend her to her mother when Ruby was accused of going above her station, as it were. I wanted to smack absolute living shit out of the racist cops and asshole pastor who helped keep the black people of Winslow “in their place”. The love story was wonderful and grounded her into her true self, but the journey she made to self-acceptance after trauma is primary.

I was angry reading this book, y’all. I was angry at the small and large indignities that Huguley expertly describes – from the physical posture her characters had to assume around white people to the language used to them by authority figures in the town to the fact that two separated doctors were required. There was much conversation about how Adam, who had a white father and a black mother, didn’t fully fit in either world – his skin color precluded him from full acceptance in any community. The minefields and nuances of life were astonishing.

But of course, many of my black friends reading this would probably take much less note. To them, perhaps, Ruby’s story is their grandmother’s or mother’s or theirs. They’ve heard tales and seen things that I could never imagine – which is why I’m thankful to anyone who writes this kind of stuff down.

I’ve academically studied this time period – Reconstruction through to Jim Crow leading eventually onto SNCC and the Civil Rights movement. I’ve read the works of Martin Luther King, Jr. and Malcom X, I’ve written papers on the lingering affects of culturally accepted racism within our contemporary society. But I will never fully know. I’m a white girl from the suburbs and will always be that, no matter how many books I read or questions I ask, I will never not be white.

In the past year, the United States has been publicly reminded that we have no real idea how to talk about racial divides within our country. I’ve been living in Northern Ireland, a country with it’s own struggles of how to live with what we deem as “other”, for the past five years and have found myself frequently asked to explain why Americans “are so racist”.

I’ll be honest, y’all, I’m never fully sure how to answer. That’s such a huge and complicated and kind of inaccurate question that I don’t know where to start. In my classes, I play a clip of Kerry Washington performing Sojourner Truth’s “Ain’t I A Woman” and recommend they read bell hooks and Roxane Gay. If I teach that class again, I’ll add Huguley to that list.

As I referred to above, this book didn’t tick my romance boxes. Adam and Ruby are the souls of propriety and people of their culture – so there’s no romantic fun. Their relationship builds slowly and quietly – when they finally confess love for each other I was slightly taken aback, not fully convinced they actually felt that way. Happy they did, don’t get me wrong, but nevertheless, a little surprised.

If you like historical fiction, pick this up. If you like steamy romances, this one is probably a pass. If you like books that open up worlds you can never really visit – even if it is one connected to your ancestry – then pick up A Virtuous Ruby and I promise you won’t regret it.