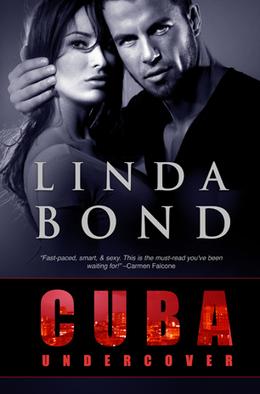 Linda Bond’s Cuba Undercover is a novel of kidnappings, governmental oppression, high-intensity escapes and, of course, stolen moments of romantic bliss amidst all the drama. However, while Bond seems to have a lot to say about Cuba’s current political climate and the plight of refugees in America, Cuba Undercover seems to bite off a bit more than it can chew.

Sponsored links
Rebecca Menendez is an up-and-coming reporter, one who prides herself on defending the innocent and exposing corruption wherever she can. She’s also a bit of a one-woman Cinderella story; a fatherless Cuban immigrant, raised in the projects of Florida, who has fought her way to success and recognition. When one of her stories--a woman who has been severely abused by her husband--manages to make it to the top of the news, Rebecca knows she’s finally on the verge of true success. Standing in front of the courthouse, cameraman at her side, Rebecca is ready to deliver the story of a lifetime.

With the cameras rolling and story feeding live, though, Rebecca is suddenly and violently kidnapped by a previously unknown group of Cuban militants. Before she knows what’s happening, Rebecca and her cameraman find themselves deep in the wilderness of the Florida Everglades, facing an ultimatum: document an illegal rescue mission in the heart of Cuba, or face the consequences. Despite the danger, Rebecca knows there’s a story here: after all, there’s been so much talk of Cuba’s supposed improvements that any proof to the contrary would be headline news. Against her better judgment, Rebecca agrees—and quickly finds herself with a story she never could have anticipated.

Antonio Vega is our tortured revolutionary; heart full of anger at the Cuban government that oppresses his family, driven to the edge by the need to save his sister from the clutches of an abusive but well-connected man. His plan to kidnap Rebecca is painted in the most sympathetic light possible—for obvious reasons, since he’s our male protagonist—but he’s still kidnapping her, and as a result, the initial slide into sexy town is a slightly awkward one. I’m no stranger to plots that are heavy with lines like “he’s the last person I should be attracted to!” and, “ “I just didn’t understand why I found her so sexy. This is neither the time nor place,” but when it’s because someone has literally been taken hostage, they come across as a little creepy. Of course you shouldn’t be thinking of her sexually, dude. You’ve kidnapped her. Yes, eventually she’s totally into it, but we have terms for what happens when men have sex with women they’ve kidnapped, and one of them rhymes with “crepe.” Don’t get me wrong; our heroes are resourceful, sexy, and by the end, obviously into each other, but it takes a while to get over the impression that Rebecca is suffering from a sexed-up version of Stockholm Syndrome. (To Bond’s credit, she references that concern towards the very end, but it’s brief and immediately dismissed.)

Cuba Undercover is a short little novel, clocking in at just a couple hundred pages, and most readers will be more than capable of finishing it in an afternoon. Because of this, while the plot has plenty of general action-movie twists and turns, the characters aren’t terribly well defined. Spunky reporter meets tortured, sexy revolutionary, shenanigans occur, etc. The plot itself is fast-paced and hectic in a TV drama sort of way. You’re thrown into the thick of things immediately, and once it starts, it’s all action. Smuggling people in and out of Cuba, minor gun battles, the ever-pressing need to evade the Cuban government’s secret police; it’s like a spy movie, if that movie was half an hour long. It has some genuine suspenseful moments, and certainly keeps you turning the pages, but overall, there aren’t many surprises. Additionally, the kidnapping angle won’t be for everyone. Bond may hurriedly resolve the “Stockholm Syndrome” issue right at the very end, but it’s still the age-old “oh, heavens, I’ve been kidnapped! And my kidnapper is sexy!” Unfortunately, the sex scenes we get are quick and rapidly shuffled aside to make room for more intrigue, and while Rebecca and Antonio spend a lot of time talking about how crazy they are for each other, you don’t really feel it.

Of all the elements in Cuba Undercover, I have to say that the political angle is interesting. Bond tries very, very hard to make a statement here; after all, Cuba’s been in the news a lot lately, and Bond name-checks the Obama administration repeatedly, making it feel a little more pointed than it would if she had just been using Cuba as a convenient “oppressive dictatorship” backdrop. There are plenty of ways and places to make political statements, and while I won’t say that one cannot use Romance to make a point, I don’t think Bond really does justice to all the material she dredges up. She seems to be on the verge of trying to make a definitive call, but I can’t tell what it is. Are we supposed to… continue the embargo? Stop the embargo? Feel bad for our American culture of excess? These are all valid points that could be made, but Bond shies from actually making them. I’m not saying that any novel involving Cuba has to make a Big Political Statement, but Bond clearly has one in mind, and the fact that she doesn’t quite manage to follow through and let us know what she’s thinking makes the whole endeavor feel a bit stilted.

Bond’s novel is an interesting enough story, and the characters are easy to empathize with. However, we’ve all read this story before. Many times before, if we’re honest, and as a result, there are few surprises in Cuba Undercover. If you need a quick, kidnap-heavy, semi-political romantic romp, it’s not a bad way to burn through an afternoon; but if you’re looking for something to really sweep you off your feet, I’d recommend looking elsewhere.