Lure of the Jaguar (Hades' Carnival #7) by N.J. Walters 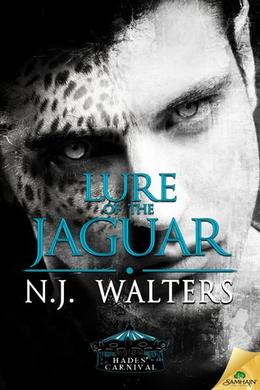 Reading Lure of the Jaguar is much like waking up with a raging hunger and only having saltine crackers to eat because that’s all you have in the house - when what you really want is a baked potato loaded with sour cream, chives, bacon bits, tomato and shredded cheddar cheese. Ooey, gooey and oh so filling. In other words, Lure of the Jaguar is sadly something that barely takes the edge off of your hunger to adequately fill your belly. While it is something, it is definitely not enough to satisfy.

Sponsored links
Lure of the Jaguar is, and please don’t laugh, my first foray into the shape shifting world of romance books. While ‘shapeshifting’ enters the domain of the paranormal, that didn’t factor into my decision to rate this book a paltry two out of five stars. For me, romance is romance, and I for one love a good romance novel if it is well written regardless of genre, be it fantasy, historical, biker or whatever trope you happen to like.

Shapeshifting gives rise to all kinds of hot fantasy scenarios, and I was really anticipating a thrill ride through seduction town. As part seven of N. J. Walters series ‘Carnival of Hades’, it was pretty clear that most, if not all of the characters must have been fleshed out in the earlier books. At least, that is my assumption, as there is very little information given about either of the main characters, other than their name, rank, serial number and the fact that they want to tear each other’s clothes off. But I digress. The paranormal premise and the backstory of Hades and the Jaguar man is skirted over giving just enough detail to be loosely called a factual recount of past events.

Call me crazy, but after a lifetime of reading cookie-cutter Harlequin romances, I’ve been conditioned to expect some snippets of humanity in the backstory, some delving into the soul and psyche of each of the characters. You know, the ‘what makes them tick’, the ‘what heartbreaks they’ve endured’, their secret fears and wants, and certainly a generous peek into what their daily lives are like. This book does not deliver on any of the expected and necessary components of a novel whether or not it’s a romance.

In fact, the lack of contextual detail is quite perplexing to the reader, as all of the ingredients for a stellar novel are in place. Our hero Stavros - a jaguar shapeshifter, is the last of the seven warriors who has not settled down after his battles with Hades and found a mate. He has resolved not to, so that no other mortals will be hurt because of him. He has taken refuge in the hot and humid Louisiana bayou where he slinks, both as jaguar and as a half-naked specimen of male perfection at an isolated cabin, keeping to himself. However, into his private refuge comes Toni Richards, all five foot nothing and full of ripe luscious curves, photographing the wildlife of the bayou.

Toni and Stavros remain one dimensional characters throughout the book, which is something of a disappointment. The bayou positively screams sex - all steamy tropical vegetation - a hint of danger from the gators and wildcats, isolated cabins and nary another person to be found. N.J. Walters could have done a lot with her chosen setting and two hot and sexy main characters. Instead, we’re given the speedy version of instant-love.

In practically the same breath that we find out that Stavros is attracted to Toni, we find out that Toni is ready to have sex with him. There is no slow and sweet seduction. No rising heat in the bayou, no slow caresses and no talking before sex. Almost immediately after establishing there is an attraction, a weak kidnapping attempt happens to Toni, Stavros sweeps in and transfers some rainbow magic into Toni as they have sex and suddenly she’s immortal and there is no more problem between Stavros and Hades. And yes, it happens that fast in the book.

As a reader, you kind of have that - ‘nah, it didn’t really happen that fast did it?’ feeling, and then you go back and skim the chapter and confirm that it is indeed so, and then you tell yourself that the author must have done it for a reason, so you read on and realize that you are now at the end of the book. I actually went back and checked the table of contents because I thought my e-copy must have downloaded incorrectly, but nope. It was all there. Just short and not as sweet as it could have been. To be truthful, the aspect of the book that really got my attention, was the substory of Hades and his on again - off again love Persephone. The interaction between those two was much richer for even the few sentences they were granted, and the hinting at a deeper story was more interesting than Stavros and Toni.

A couple of other bits that really niggled me about this book. The first was that Hades shows up in an Armani suit, which is fine, but he was wearing a linen shirt with it. So many things wrong with that! Linen shirts should only be worn with linen suits. The other was Stavros’ ability to summon clothing onto his person or render himself nude as he willed. I get that he has powers not of this world, but to produce a pair of leather pants in the heat and humidity of the south was not my idea of sexy - just my idea of sweaty - and the not good kind of sweaty. Threw me for a loop those leather pants.

So, to sum up, I hate to say it, but Lure of the Jaguar was short on backstory, short on character description, short on plot and short on plausibility. I’d even go so far as to say that Lure of the Jaguar reads more like a story outline a writer would give to their editor than a fully fledged completed novel or even novella. A quick search on Google tells me that most romance novels range between 55000 to 70 000 words. Lure of the Jaguar comes in at just under 30 000. It really feels rushed and incomplete as a romance, and even as a short story. As such, I have to give this book a 2 out of five stars.