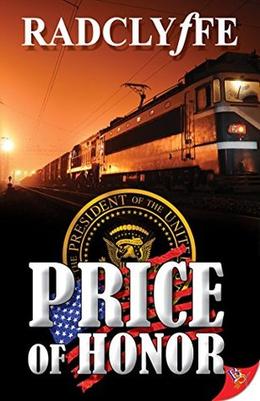 Price of Honor by Radclyffe is the ninth book in the Honor series and appears to be a chapter in a longer story rather than a stand alone book. I’m new to Radclyffe’s work, but after reading Price of Honor, I’ve added her to my list of series to catch up on. I enjoyed the rhythm of the characters – once I understood what was happening in the plot. That, admittedly, took me a while.

Sponsored links
There is no one couple in Price of Honor, or one storyline. Instead, as I said above, it’s a chapter in a longer story. The first 50 pages or so, I will admit to being very, very lost. I couldn’t really keep straight who was who and who was with who and who was a good guy and who was a bad guy, etc. Once I got my bearings, I enjoyed the story, but that handicap of not knowing and being disoriented definitely affected my enjoyment.

The story is set largely around two couples, one long established and married – Cam and Blair, and one brand new – Dusty and Vivian. Blair’s father is the President of the United States and Cam is a Secret Service agent. Dusty is also Secret Service, but is part of the K9 unit, while Vivian is White House Press Corps. The bulk of the story takes place getting ready for and then embarking on a train journey for the President’s re-election campaign.

In the background, a seriously fucked up woman called Jane is attempting to assassinate the President. She is part of a militia, raised to believe that she is part of some great war (target not clarified, but assumedly the entire world). Just before the action of this book starts, there was a raid on her compound and her father was killed and her sister put in jail. So this grand plan to assassinate the President now lies on her shoulders. She appears vengeful enough to carry out such a task.

Because this is a chapter in a larger journey, Radclyffe spends almost no time orienting new readers to the setting. This is totally fine – I get that I as a newbie in the middle of her series is not her audience. But it also means that the only characters I really connected with were the ones she was introducing fully in this one – Vivian and Dusty.

Dusty is a no-nonsense agent whose only true relationship is with her canine partner. When Vivian interviews her for a story, the connection is instantaneous and watching them tentatively dance around each other is fun. I am not a lesbian and have never tried to initiate a relationship with a woman who I am not fully sure is on board, but I imagine it contains some of the elements described here. When they kiss for the first time, I could feel the sense of “coming home” Dusty had. After a lifetime of struggling to connect intimately with others, here is her plumb line, here is her lobster. She’s home.

This a book I would call “intimate” rather than “steamy”. The married couple has sex often, but the sense I got from that prose was that these were two women who knew each other’s core. Their sex was a compliment and a cause of their emotional intimacy – they were far past the exploring stage and went straight for what the other partner would like. That’s a different feel to most sex in romance novels where the exploration is the fun bit. For Blair and Cam, they’re far past that. And that, to be honest, was refreshing.

The plot drove quickly and the action was well paced. The narrative flips back and forth between the good guys and the bad guys. There’s a bit with the guy running against the President and he seems like a peach. And by that, I mean an atrocious human being who should be NOWHERE near nuclear codes. Blair’s dad as President seems affable enough and the description of the rhythms of their lives feel accurate. (Full disclosure, most of what I know about politics comes from obsessive viewings of The West Wing, but still.)

Overall, once I oriented myself to the plot arch Radclyffe has and is constructing, I enjoyed the ride.

Recommended for fans of political espionage, long stories to sink your teeth into, f/f pairings (obviously) and layered plots.