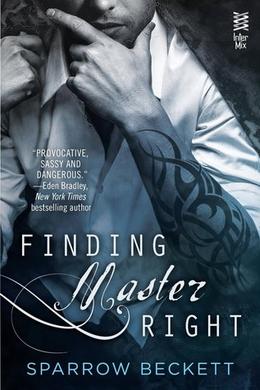 The writing team that makes up Sparrow Beckett clearly knows their stuff. The detail in this novel is impressive and enveloping and once you pick this one up, I am sure you won’t be able to put it down.

After a discussion about what Kate is doing there, the two strike up a deal. Banner, it is revealed, is only interested in a slave relationship and nothing short of. That idea appalls Kate, but she still instantly trusts him. They decide that Banner would train Kate, in a manner of speaking, before passing her off to one of his Dom friends he knows is trustworthy.

Over the rest of the story, Kate is introduced to the D/s world – with its language of hard limits, lists, and slang. As they stumble towards their HEA, the two are often taking two steps forward and four back as they discover emotional connection is not something easy to ignore. While the book in in third person, the chapters alternate between Banner’s POV and Kate’s. Sparrow Beckett’s website says one writes one and one writes the other and that differentiation of styles helps paint the characterizations.

Finding Master Right is the beginning of a new trilogy and the copy I read had a preview of the next book included. It focuses on Ambrose, a character who plays a large role in this novel, and a curvy girl named Everly he meets when he’s getting his hair cut. As a curvy girl myself, I adore books where I can recognize someone who looks like me in books. As comedian Sarah Millican says, usually the only time I see girls who look like me in magazines and movies is with the word “before” under them. That vibe usually extends to romance novels so I’m thrilled that this writing pair has that on their radar.

But back to this book, I have to admit that Kate drove me up an absolute freaking wall. I understand the need for dramatic tension as she explored this world and her own feelings and I like how they addressed that BDSM can be a feminist activity, but, ugh. Kate is a social worker in a drug and alcohol rehabilitation facility; a job which is utterly draining and can be crushing if one does not practice self care. Kate’s POV chapters talk about her need to maintain boundaries between work and self. I enjoyed the parts of the book where she was at work, where she interacted with her clients and where she demonstrated that she’s clearly very good at her job. I enjoyed her less when she was with Banner.

I have not, in disclosure, entered into a D/s relationship. In talks with those who have, this is a fairly good description of that process, both in external conversations and internal monologues. So my criticism doesn’t lie there, it just lies in how naïve Kate is! Like, honestly. I know the internet is a scary place when one is researching something like “figging” (NSFW, obvs, if you choose to!), but if you’re not willing to talk about it, then I’m not fully sure you’re emotionally prepared to do it! Honestly woman, your job should have trained you to roll with things a little easier than you seem to. A little self-awareness is all I guess I’m asking for.