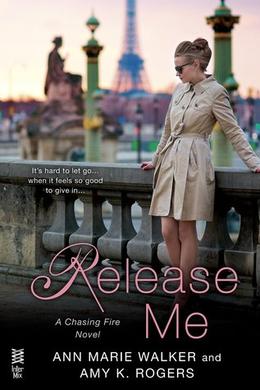 Did I like this book? Let me answer that this way. When I got the ARC last evening, I poked around on the Internet and discovered it was the second in a trilogy that seemed very connected. I acquired the first book, Remind Me and started reading it at around 11:30pm. The next morning, I didn’t even hesitate to grab my iPad and continue in on it. I finished Release Me a few moments ago, at 10am. I have also added the third book - Reclaim Me, releasing in October – to my TBR list.

Sponsored links
So, yeah, I liked this book.

In the preface, the authors say they hope that Hudson Chase gets added to our list of book boyfriends. Ladies, be assure he is now laminated onto that list.

Our couple is Allie and Hudson, billionaires each in their own right living in Chicago. While Allie is an heiress to a massive media fortune, Hudson is a self-made man from a fairly shitty background. The two met a decade or so ago in a lake town on the Upper Peninsula in Michigan. Allie’s family was on holiday and Hudson was working the local water taxi. They had quite a hot and secret summer fling that came to an abrupt end when Allie’s father was summoned back to Chicago on business. Neither one of them has ever forgotten that summer.

The first book is about their reconnection. When Remind Me begins, Allie is engaged to a pretentious twat of a French marquis named Julien who could take a long walk off a short pier as far as I’m concerned. Disgusting human being all around, to be frank. Clearly, she makes the correct choice and dumps him for Hudson (the passage which describes it literally made me cheer out loud).

Of course, the course to true love never has run smooth, so there are hiccups along the way and Release Me is largely concerned with those. I don’t want to tell you too much more of the plot because I really do hope that you dive into these books post haste, but I will say this. The hiccups only make the relationship feel more ‘real’. I believed each of their reactions to each circumstance and while the book had its moments of angst, it wasn’t like soap opera angst. They are two adults with baggage and issues who are learning if they can and then how to build a life together.

Also, just so you know, these two have more sex in more ways in more locations than just about any other romance novel couple I’ve met in recent memory. Holy shit, y’all. This is one hot series. I am, however, concerned for their backs and knee caps and when you read the book you’ll know why.

The two other characters who feature center stage are Harper, Allie’s best friend, and Nick, Hudson’s little brother. Harper is a perfect best friend – encouraging and supportive, sassy and who clearly deeply loves Allie. When tragedy befalls Allie early in the second book, it is Harper who serves as her rock. Nick, on the other hand, is a bit of a mess. Nick struggles with addiction and spends part of this book in a rehab. I know some readers may find any mention of relatives with addictions an emotional, so be aware of that. It’s handled well and accurately, for the record.

A highlight of the book for me is Christmas that Allie creates in Hudson’s penthouse that Nick and Harper end up crashing. The emotional journey of each of them that the holiday represents is charming and wonderful.

But, not all is well in Allie and Hudson’s world as the douchecanoe Julien reappears towards the end of the novel. Of course, he is there to cause trouble and I wish I could tell you it all works out BUT I CAN’T. Because the book ends on a BLOODY CLIFFHANGER. And no, I’m not cross about that at all. No, I’m not considering tracking down the authors and offering elaborate exchanges of goods for Reclaim Me earlier than October. Why would you suggest such a thing?

This book – and the first – are recommended for fans of contemporary romance that is heavy on the sex and graphic descriptions thereof. It’s all fairly vanilla with some minor bondage, by the way. But damn, it’s described well.

Release Me is also recommended for fans of second chance stories that defy the odds of social convention and stories of people finding their own way despite the paths their family may have chosen for them.