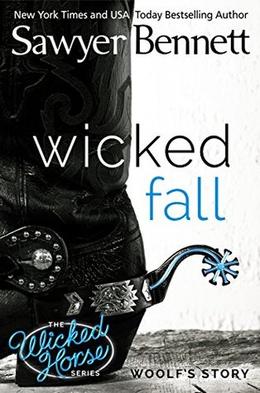 Wicked Fall by Sawyer Bennett oozes sex. From the first cowboy-booted step our hero takes on the first page, each and every sentence, paragraph and chapter is dedicated to the open exploration, enjoyment and hedonistic aspects of good healthy sex. Woolf Jennings is the super rich CEO and head of his family's impressive ranching holdings. He is also the six foot four, impressively endowed and highly sexed owner and active participant in the private sex club he has just opened behind the facade of a country western bar on his family ranch.

Sponsored links
Callie Hayes is the Governor’s somewhat mousy daughter who just had a wake-up call that resulted in her dumping her fiancee and heading back home to find herself. Except that she runs straight into the brick wall that is Woolf Jennings chest just as her alcohol fuelled courage has her entering a wet t-shirt contest at his bar. With her perky breasts showing through the thin wet material, Woolf carries Callie out of the bar, trying to save her from herself. Instead he finds himself lured back into the green eyes of the woman he has spent eleven years trying to forget. Callie though, makes no bones about it - her crush on Woolf has never diminished no matter how she has tried to medicate herself with a comfortable suburban life out East in Connecticut.

Wicked Fall is a fantastic book that will keep your mind and your pants flooded with new sensations, ideas about living life and enjoying one’s sexuality. Whether you are the experienced lover that Woolf is or the innocent that Callie is, there is something for everyone to discover and enjoy in this novel. The subject of sex clubs and group sex and voyeurism and menages are not new by any means to the romance genre of late, but, the forthright way in which they are introduced and handled in this book is extremely refreshing and arousing.

At first, learning about Woolf’s self described sexual afflictions and perversions was a bit of a surprise as it overshadowed the set-up of a super rich hero CEO/cowboy seeking to rekindle his lost love. There’s definitely an undercurrent of worry Woolf has that his family (and the object of his affection) will look at him askance once his predilection for ass fucking, double penetration (with his best friend Bridger and whatever pretty waitress is up for it) plus watching and participating in consensual gang bangs comes to light. Wolf is not exactly hiding it, but he’s not exactly broadcasting it either.

Now, even if you don’t have a lot of experience with this type of sexual interaction (whether in real life or through fiction or porn), Sawyer Bennett provides an excellent and explanatory introduction and a glimpse into an Alternative Sex 101 Class on the subject of the lifestyles of people involved in these types of groups. The word swinger is barely used, and the ins and outs of the behaviours allowed and accepted in Woolf’s club and the parameters of how to interact while there are covered.There is even a few paragraphs where Woolf outlines his careful planning and consultation with lawyers to ensure that his club never falls under the suspicion of being a brothel or that any of his employees would be viewed as prostitutes by the law.

The really interesting tension in the story comes from the conundrum of how this sexually free and voraciously adventurous man is going to be able to fall in love or settle down with Callie as he is beginning to realize that there is something special about her. It doesn’t hurt that Callie is full throttle trying to create a ‘new more adventurous’ self - hence the wet-t-shirt contest and sleeping with Woolf with no seeming strings attached. But how on earth does a died in the wool sexual wanton initiate a woman he just-might-love into this lifestyle?

For some, this book may become a mini moral examination over the meaning and place of love and sex between a couple. The menage a trois that occurs near the end of the novel is emblematic of this. The situation of three people, two who shared emotions, the third a friend to both, had me sitting on the edge of my seat - because the outcome was so unknown. I don’t want to give anything away, except to say that Sawyer Bennett is to be commended for her portrayal of the realism of each person’s role and the vulnerability and trust issues that a menage must ultimately bring with it - Bennett deftly separates notions of fantasy from what is a very real human situation.

As the reader, I was soaking up the information and access to a world I haven’t experienced first hand, and all the while in the back of my mind I was wondering just how the author would craft a satisfying ending to the story. Could Woolf love Callie while still participating in group sex on his desk at work? Could Callie accept that part of him if she didn’t want to live that lifestyle? Ms. Bennett does not shy away from the hard questions or hard answers the main characters seek during the final chapters of the book. Woolf and Callie both weigh in as do some of the secondary characters, until we are given the full spectrum of possibilities.

The take home point of Wicked Fall is that all sexual appetites and proclivities are fine just as long as the participants can consent and all parties are okay with what occurs in private and public spaces. The discoveries Callie makes about herself and her own sexuality guide the reader through these ideas. Wicked Fall embraces all aspects of sexuality as normal and healthy and really makes the effort to showcase that sex can be separated through a lens of ‘sex for pleasure's sake’ and ‘sex for emotion’s sake’, and that sometimes sex can even encompass both aspects.

Sawyer Bennett is an extremely talented writer and I for one am eagerly awaiting the next book of The Wicked Horse Series, of which Wicked Fall is the first installment. This book rates a solid 5 out of 5 stars.