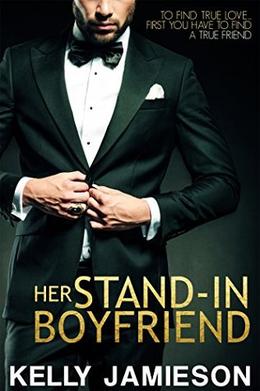 Kelly Jamieson’s Her Stand-In Boyfriend is a sweet little novella with a nice love story and few surprises. It’s comforting, the way Pride and Prejudice becomes when you’ve read it (or watched it) for the tenth time: you know exactly what’s going to happen, but you still enjoy watching as it does.

Sponsored links
Lexi Mannis is an events planner in Chicago. Her business is finally starting to take off, high-profile clients and big parties rolling in, and her future is looking bright--until the party where everything goes wrong. The caterers vanish, the gifts are stolen, the birthday girl is in tears, and as far as her clients are concerned, it’s all Lexi’s fault. Worn out and at the end of her rope, Lexi knows exactly who will help perk her back up again. The guy who’s always been there to perk her up again.

Lexi and Mac have been close friends since college. Although there’s been at least one change: the nerdy and reserved Mac has become the wealthy and semi-famous Mac Northrop, head of a billion-dollar tech company that he started after graduating. Despite his success, the two are still thick as thieves. He builds her Ikea furniture; she plays hostess for his work parties; they rely on each other as emergency “plus ones” to all manner of events. Privately, Lexi refers to Mac as her “Stand-In Boyfriend,” much to the chagrin of her friends--because it’s obvious to everyone except Lexi that Mac is crazy for her.

Of course, while Mac may have nursed the flame for all of these years, he’s no creep. He’s not just maintaining a facade of friendship with the secret hope of finding out what’s under Lexi’s omnipresent Little Black Dresses, and he has no expectations. He’s head over heels for her, sure, but since that’s not how she sees him, he’s content to keep their friendship intact while trying to find the girl who will help him move on.

Until, one night, everything changes--and Mac finds himself desperately trying to get Lexi to realize that there’s something between them, before he has to walk away forever.

Her Stand-In Boyfriend is, as I said, a sweet little story. Clocking in a just over a hundred pages, it’s less of a sweeping story and more of a snapshot, or a single episode of a sitcom. While Lexi and Mac are believable, the length constrains how well the reader can really get to know them. Lexi uses words like “mchotness” and likes wine and hockey. Mac is a sexy billionaire who used to be a “nerd.” There is nothing wrong with these characters; they’re just not terribly deep, and we don’t get to know them particularly well. As tropes go, though Jamieson manages to make them sort of comforting, rather than irritatingly shallow. It’s a story we’ve seen a thousand times, but it’s still pulled off sweetly, endearingly, without any awkward attempts at big twists or unnecessary drama.

The sex--thank heavens there’s so much sex in such a little book!--is wonderful. HSIB could almost be construed as thinly-veiled erotica. Every time Lexi and Mac get their clothes off, sparks fly and happy parts slap together in ways that readers will find delightfully distracting (even if Jamieson has a penchant for stopping for dialogue mid-penetration). As wank material goes, this one’s pretty good.

All in all, there isn’t much to say about HSIB: it’s a brief story with characters you’ll recognize and a plot that goes exactly how you’d expect. Thankfully, though, Jamieson manages to pull off an age-old story in a way that is warm, sweet, and sexy enough to make it enjoyable. Her Stand-In Boyfriend is definitely good company for a long, lazy afternoon, or a hot bubble bath--you’ll be glad you remembered to bring it along.