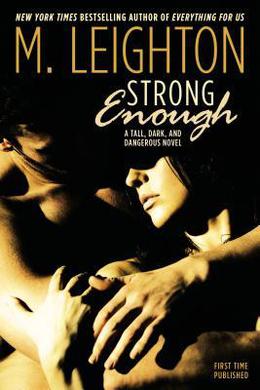 M. Leighton’s Strong Enough is a thriller romance--plenty of dark, dangerous, violent men, family secrets, ominous, shadowy government missions, and a plucky, inordinately optimistic heroine to round everything out. While Leighton nails the suspense and tone of a good thriller, her attempts to interweave it with more traditional romantic themes create an occasionally awkward contrast.

Sponsored links
Muse (Muse? Really? You named an artistic character Muse.) is a smart but sheltered young woman. Her life in California is an empty one at best: her whole world, her dad especially, is in North Carolina, where she grew up. The Colonel’s long military history has clearly bled into Muse’s upbringing, because when she explains in retrospect that she had to bolt on short notice for mysterious reasons, it’s clear that she didn’t ask questions or demand explanations. She was told to go and, ever so politely, simply left.

Distance and time haven’t altered Muse’s relationship with her father, though. Their methods of contact may be a little more, ah, formal than most parents, but when the Colonel doesn’t answer her usual call, even Muse knows something is wrong. (Sorry, Muse. You just don’t come off as terribly bright for much of the book.) Beside herself with concern and unable to track her father in the way a normal child might, Muse decides to seek an alternative route. When a friend mentions that she knows a bounty hunter with a reputation for never failing to find his mark, Muse decides to take action. Before she knows it, tall dark and handsome has swept into her life with a brooding look and a promise to track the Colonel down come hell or high water.

Jasper, for his part, is nothing if not a man of action. He’s dark, dangerous, efficiently ruthless and always completes his mission--which has little to do with Muse’s request. Although Jasper is intent upon finding the Colonel, he has his own reasons for doing so. For the first time in his otherwise spotless career, though, Jasper finds himself in the compromising position of sympathizing with the person he’s supposed to be using to track down his mark. Muse is naive, perhaps wilfully obtuse at times, but she is also gentle where Jasper is hard, open to a fault where Jasper is obsessively secretive. She’s his perfect complement, his unattainable dream, and his kryptonite, all rolled into one impulsive, red-headed woman.

Before they know it, Jasper and Muse are locked into a romance as doomed as it is consuming. They can’t keep their hands off each other, despite knowing that what they want is impossible. Men like Jasper don’t get happy endings, any more than girls like Muse get to have the simple, uncomplicated lives they crave. With the complications mounting and the game getting more dangerous by the minute, Muse and Jasper have to decide: is it worth it to try and enjoy what they have while they have it? Or should the cut and run before it’s too late?

Strong Enough is certainly tense, and like a lot of thrillers, it’s dark as hell. Jasper isn’t the spy equivalent of a “Hooker with a Heart of Gold.” He’s damaged, violent, and a danger to anyone naive enough to care for him. He’s a predator, through and through. Leighton could almost be accused of drawing Jasper too well, because he’s so obviously dangerous that watching Muse bumble around in such a naive, trusting fashion that it kind of hurts sometimes. The minute the reader meets Jasper, everything about him screams “SOS! FLEE, GIRL, FLEE!” I realize that Muse’s open, trusting nature is supposed to be what makes her perfect for him, but it’s honestly a bit much. There’s nothing wrong with a gentle (or even fragile) heroine; there is a spot of trouble with a female lead that strays into the territory of sheer stupidity.

Overall, though, Muse and Jasper have a chemistry that simply works. The sex between the two is primal, raw and captivating. If nothing else, readers will enjoy the multiple, well-written and lengthy scenes of these two doing the no-pants tango. It’s some pretty great wank material--although Leighton has a bad habit of interrupting orgasms with violent and disheartening plot developments, and I’m not a huge fan of smash cuts from handjobs to heartbreak. My lady-boner doesn’t like being suddenly subjected to death and depravity just when the smut is getting good: It’s confusing!

Strong Enough ends with a clear lead-in to further novels, and I have faith that Leighton will do them justice. While the novel has its hiccups, now that Leighton has a good feel for the world that’s been created, and the tenor of the characters, I think that the books will only improve. Jasper and Muse have an interesting future ahead of them, one that I’m sure we’ll enjoy keeping up with.

My only real complaint about Strong Enough is that the whole thing just feels super dark. Even when the violence and shenanigans subside, you can’t quite shake the several hundred pages of ominous scene-setting that have preceded it--which in turn makes Muse’s bullheaded optimism a little difficult to deal with. Every time you think you have a moment to relax, something violent happens. While that’s a good thing for a thriller, for a suspenseful romance, these plot points have to be dealt with carefully. Still, though, while Leighton occasionally stumbles, Strong Enough is an enjoyable, tightly constructed novel that most readers will enjoy. I highly recommend it for anyone who considers themselves an aficionado of risky men and second-hand adrenaline junkies.