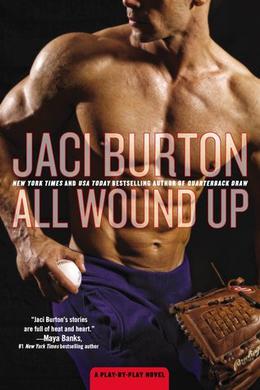 Tucker Cassidy has good looks, a supportive family, and a prodigious talent for the sport he’s passionate about--baseball. Tucker is something of a rising star, a major league pitcher whose curveball just can’t be beat. Of course, success on the field doesn’t always translate to success everywhere else, a lesson Tucker learns (rather painfully) when he breaks up with the latest in a seemingly endless string of not-very-serious girlfriends. Embarrassed, fed up, and in pain, Tucker figures his night can’t get any worse; until a long-legged, no-nonsense, distractingly sexy doctor shows up on the scene.

Sponsored links
Dr. Aubrey Ross can’t help but feel for the man she’s found nursing his crown jewels in her dad’s wine cellar. Few injuries are as bad as the ones to your dignity as well as your body, and as a resident in her hospital’s ER, Aubrey sees her fair share of both. Despite the awkwardness of the situation, she’s determined to be nothing but professional and distanced, not matter how attractive this man is. Or how captivating his eyes are. Or how charmingly persistent he is, even after being shot down for a date. Aubrey has her priorities in line, after all: no one is standing between her and the career she’s been working for. She knows better than to get involved with any man, let alone a man who plays for the team her father owns.

Tucker, despite a bit of a reality check upon realizing that the woman he’s flirting with is his boss’s daughter (gulp!), can’t get Aubrey out of his head. He’s obsessed. He’s already half stupid for her, and they haven’t even gone out yet. So gently, but persistently, Tucker talks his way into a date, and before the two of them know it, they’re headed in a direction they never could have predicted.

Of course, just because Tucker and Aubrey couldn’t predict it doesn’t mean the reader can’t. Jaci Burton’s All Wound Up is the tenth addition to her Play-By-Play series, and while it has its good points, it does feel a little lackluster at times. Although the novel has a somewhat endearing premise, great sex, and a little splash of drama, it lacked the spark and drive that so many romances--especially sports-themed romances--usually bring to the table.

All Wound Up’s biggest issue is a lack of real cohesion among its two leads. Again, the sex is great (perhaps Burton should have stuck with just 300 or so pages of boinking? I’d read it) but while I can see that Aubrey and Tucker are definitely, headily in lust with each other, the reader never really sees them fall in love. The progression all feels sort of perfunctory, like a high school relationship. Step One: I find you attractive, human! Step Two: I am going to touch you as much as physically possible, perhaps with my genitals. Step Three: I guess we’re going steady now? Step Four: Meet my parents! Now it’s official! You never really see them evolve emotionally. At some point in the third act, they just sort of state out loud that they love each other, and that’s that. Wedding bells! Woo!

This might be because of All Wound Up’s larger sub-plot: the balancing of work life with love life. In all fairness to Burton, she does a good job of this. Aubrey, as a doctor, is of course drowning in responsibilities, and Tucker is on the road for games all the time. It’s no surprise that they have trouble carving out time for themselves. I think a lot of readers will find that this aspect of the novel rings true: who hasn’t been in this position? It’s far too easy to look at all the obligations you have as an adult and decide that maybe, for now, romance just isn’t worth the time. But before you know it, “for now” turns into “forever,” and you’ve let a lot of good things slip away without realizing it. For those of us who are busy everywhere except the bedroom, I expect that All Wound Up will hit close to home.

Speaking of busy in the bedroom--Tucker and Aubrey’s sexy-time antics are the one place where the novel really rings true. The sex is vanilla, certainly, but it’s hot and very well-written. There are even some mildly adventurous antics that stray outside of the normal bedroom behavior. Tucker is a pretty generous dude, in and out of the bedroom, and it pays off in a big way. Not that he doesn’t get his fair share of attention, but he’s definitely a giver. Dear reader, I would anticipate “bookmarking” several of these pages, and possibly revisiting them when you have, ah, some time to yourself.

All in all, Burton’s novel is a sweet, if slightly flat, little romance. I can’t account for its veracity in terms of sporting terms (not a baseball girl, which I realize is a dreadful admission for any proper American), but what it lacks in romantic punch, it more than makes up for in smut. Tucker and Audrey may not seem swept away by one another, but they are thoroughly compatible in the bedroom--and the struggle of two promising career people to make time for romance in the midst of their responsibilities is an eminently empathetic one. Especially if one has a thing for baseball players (and their incredibly tight pants), All Wound Up will have plenty to keep a reader occupied.