Make You Burn (Deacons of Bourbon Street #1) by Megan Crane 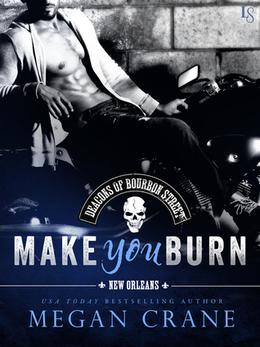 Its surprising how one motorcycle club romance starts to read like the rest. Hot guy, exiled for whatever reason - prison, deal gone bad - comes back, encounters chick with whom he had a past and is still hot for and just can’t stop his gruff self from falling for her.

Sponsored links
Physically he's always a specimen rugged manhood, but has a pretty boy face that makes the angels sing. Too bad that it’s been marked up (in prison, on the run, or by time) but it only adds to his attraction. He is a classic badass who punches first and asks questions later. He has come back to clean up the mess his club is in right now. Oh, and not to be forgotten in the predictable mix is the all important element that his family of origin is always worse than the lowest trash, because at some point we'll find out that a particular type of horrible abuse at the hands of his mother/father drove him to the colours and cuts of his new family of brothers - the Motorcycle Club.

In this formulaic recipe, the woman he inevitably goes after has grown up in the biker life or very close to it. She knows all the rules and hierarchies and knows her ‘place’. She knows what it means to be a part of a motorcycle club’s womanhood. She also will have something in her backstory that has kept her "off-limits" and innocent from the members of the club. All of this should serve to keep the tough-guy hero away, but instead, thankfully for the readers, it creates a situation he cannot resist.

And so the fun begins!

This novel is six kinds of trashy, and seven kinds of sinful. The sex is crude, aggressive and hot. The man is blonde, bearded and muscled and the object of his affection is young, pert and waiting for her man. In one word, this book is one big hot and steamy fuckfest of a romance! Ajax, our tough as nails hero, the biker with a capital B, formerly known as Sean, was the second in command in Theodore “Priest” Lombard’s Motorcycle Club. He was exiled ten years earlier with three other of his club brothers after a deal gone bad. Now Priest is dead and Ajax is back and lusting after Sophie Lombard, the grown, gorgeous daughter of his recently deceased surrogate father, mentor and Motorcycle Club President, Priest.

The book opens with Sophie walking through the French quarter in minuscule gold hot pants, stripper heels, a mask, feathered headdress and gold-tasseled pasties. Yup. Digest that for a second. I kid you not. Apparently Sophie is out on this jaunt on Bourbon Street because ostensibly, she is 'acting out her grief’ for her father who wiped out on his Harley the night before. She defies his wishes that she live a chaste-ish life by prancing around semi-nude to make sense of her loss and tragedy. That Ajax follows this goddess of womanhood home to the bar she works at before realizing who she is becomes important later on in the book, because he uses the event to prove to her that he loves her for her, and not because she's the daughter of the club president.

See what I mean? A whole lotta fuckery going on!

More trashy bits happen when they visit a clubhouse out in the bayou. Apparently this set of bikers have extremely strict rules when it comes to their women. Something that grated on my nerves to be honest. Women fall into a few categories: whores, to be passed around between men; old ladies, who may be loved but can be cheated on; and sweet-ass bitches, who seemed to exist in the grey area that could go either way - becoming a whore or becoming an old lady if they get "claimed" by one of the members. Women in this world are there to be seen, suck dick but most definitely not to be heard, and we witness Sophie's wisdom at stooping to conquer - holding her tongue and playing the role while figuring out how to get what she needs.

The sins in the storyline are somewhat murky. While it's never clearly stated why Ajax had to leave, we do know that the club now gets its income from legal, if not desireable businesses like bars and strip joints. Why Ajax had to stay away stays a mystery throughout this book. We only know he's come back to claim what's his - his place as head of the club. In the course of Ajax and Sophie ahem, relating, we are also made privy to Ajax's sort of confirmed suspicions that Priest was murdered - run off the road perhaps - and did not accidentally wipe out on his red Harley. But, shockingly, nothing comes of this loose thread and the reader is left wondering where this tasty tidbit fits in with the rest of the meal.

As you can see, most of this novel is pretty formulaic. It’s elements are universal for bad-boy motorcycle love stories - but the sex. The SEX!! That is what lifts and separates this novel from all of the other bad-boy biker meets girl stories. The sex is extraordinary. There is no other word for it. The descriptions...the sights..the sounds...the smells. Megan Crane writes sex splendidly. And boy oh boy is there is fucking. Good fucking. A lot of good fucking. It seems that bikers do not like to seduce, or even make love. They fuck. FUCK. With gusto and appetite and stamina that could kill a horse.

There is daylight fucking, nighttime fucking and in-public fucking. And curiously, there is a lot of fucking against brick walls (where Ajax's humanity shines as he cradles Sophie’s head so as to not smash it on said brick wall while banging the shit out of her). The sex in this book does all the talking for Ajax. He is a man of approximately 12 words, most of which are rude and assholish, but hey, he's got a big dick and he protects Sophie, so he's given a pass. He is insatiable and so is she. They are like animals in heat - but only for the other. They cannot stop their reactions to one another - they both burn hot and hard and for hours at a time.

Overall this book rates a three and a half out of five stars. This is so because the plot runs dry at the end and we're left hanging on the points of whether her father was murdered or not, and what will the outcome of the Motorcycle Club be - will it flourish or die a quiet death? We're also left wondering about the other three exiled 'brothers': Cash, Prince and 'what's his name', who we are introduced to in the way authors do when they throw some odd facts about a character and then leave their stories dangling - because you just KNOW they are headed for another book in the series. Thankfully, from the author's previous works, it appears that she's well and deep into series writing, and the tantalizing glimpses we've been given into the other characters lives makes me think their stories will soon be told. Had she tied up some of the loose ends, this book easily would have been a four and a half stars out of five because the sex burns so damn hot. All in all, a satisfying read!