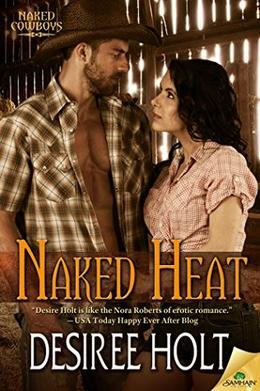 Desiree Holt’s Naked Heat is the 7th book in her Naked Cowboys series. The story is about Andrew “Mac” McDaniel and Nida Beloit and takes place, as all the Naked Cowboys books do, in Saddle Wells, Texas. Nida is the local real estate agent and Mac is a blow-in looking to buy a dilapidated ranch just outside the town limits. But he’s not trying to be a rancher. Nope, the man is looking for a place to hide out while he tries to solve his twin sister’s murder.

Sponsored links
She was killed in a conspicuous hit-and-run accident several months back and the fact that the death was never investigated makes Mac think foul play is at hand. Since the police won’t look into things, Mac takes a leave of absence from his job and heads to Saddle Wells to take matters into his own hands. He finds a run-down ranch on the internet and contacts Nida to be able to contact it.

It’s a property with a local legend attached – one that was the plot of a previous book, in fact. It’s shrouded in a bit of drama and thus has been reclaimed by the state. Nida keeps trying to talk him out of buying it as the tour it – the outbuildings are condemned, the roof is in serious need of repair, the yard is so overgrown it looks like a demon’s house on Supernatural. He insists on purchasing the property and then goes about fixing it up himself. Evidently, he flipped houses once upon a time and so is confident he can take care of things.

Both characters report an instant, visceral – even primal – attraction to each other. Mac is one of those heroes who apparently has no control over his dick – his POV tells us it jumps as soon as Nida appears. Nida, for her part, feels her inner walls contract immediately and is essentially on the verge of instant orgasm whenever she is within eyeshot of him. The sex happens quickly, frequently and well. If you’re looking for this book to –shall we say – get your motors running, it will. Over and over again.

I’ve never read any of the Naked Cowboys before, but the series appears to function like a small town romance set – like Fools Gold or Thunder Point. There’s a tribe of friends that occupied previous books and serve as the emotional core of this one. There’s not any time spent in this novel developing those relationships – Mac trusts pretty freaking quickly for a stranger and is automatically enveloped into their little world.

The dialogue is stilted a bit between the characters, even though some of them are lifelong friends. The friendships between some of the men, especially, appeared a bit too good to be true for my taste. For those who read my reviews, you know that I like my escapist romance with a grounding in reality. I know that for many other readers, that’s not a priority – so ignore me! If you like good, hot sex that makes you feel like you’re a bit of a voyeur it’s so graphic and detailed, then pick up this book. Those things it does – characterizations it does not.

Nida and Mac go from strangers to lovers to life partners within the course of the story, which takes – from what I can tell – about a month. For my personal ticks, that’s simply too fast. I just don’t buy them together – but like I said before, I’m not sure eroticas are supposed to sell us on the emotional development. Another thing for my personal ticks – I abhor the word “pussy” and it is used with frequency here. My stomach jolted every time I read it and its use decreased my enjoyment of this book.