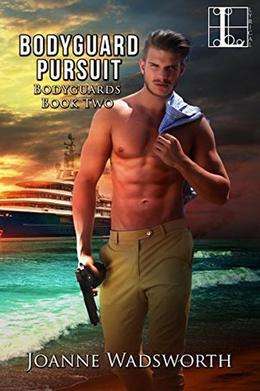 Hello. How are you? Are you well? Did you know that you are a world-class engineer with a large paycheck? I am a model. We have been friends for years, but I wanted to remind you of that. Okay. Have a nice day.

Sponsored links
Awkward, right? That feels weird and bizarre and you probably can’t figure out why I opened the review with that ludicrous paragraph. It’s a quick example of an information dump and authors sometimes use it to tell readers something even though their characters already know it. Television pilots are notorious for this – the pilot of the Big Bang Theory is a particularly horrific example. Yes, we need to get to know your characters, but please convince us that they already know each other! An excellent example of how to introduce but not sound absurd is the pilot of The West Wing.

Again, you’re wondering why the hell I’m telling you this.

Easy. This book is all the Big Bang Theory and none of The West Wing.

Bodyguard Pursuit is the second in a series of books about bodyguards from Joanne Wadsworth. Goodreads tells me that a lot of people enjoyed this book and for them, I am glad. There is nothing offensive about this book, nothing abusive or manipulative. There’s no reason for many people not to enjoy it. However, there are lots and lots of reasons for me not to enjoy it.

The first reason is that this is not a standalone book but there is no indication in a prologue or even the back copy that that’s the case. This book picks up right where the first one left off and to not have any knowledge of the prior books is frustrating. This proclivity in romance to not accurately inform readers if a book deserves the full series treatment is a massive pet peeve of mine. If you’re concerned about sales – and I totally understand that, mama’s gotsa pay bills – then throw us newbies a bone and include a summary! Ugh. Sorry. *steps off soapbox*

Beyond that, however, no one in this book talks like a human being and none of their relationships feel three-dimensional at all. It’s like the book version of a tellanovella, but it’s acting like it’s a prestige drama. There are info dumps all over the place between characters that have supposedly been living together for a year! Granted, they were keeping a lot of secrets from each other, but COME ON, y’all. I don’t buy for a second that in the course of a year of sharing the house developing a relationship so strong that they are willing to loose their virginities to each other (we will return to THAT momentarily) that the guy would have never told the girl how he ended up in the bodyguard business.

And then yes, let’s talk about virginity, shall we? These are two consenting adults who chose to abstain from sex until this book. Fantastic. No virgin shaming here. However, there are realities of having two adult virgins choose each other in the context of your novel. They are, for example, probably not going to know how to introduce a partner to their bodies. Orgasms are most likely a distant dream. I like my romance to be wish fulfillment as much as the next reader but come the fuck on. There are limits to my incredulity and the sex scene between Ben and Saria had me snorting with derision.

Tell us about them learning each other. Tell us that the first time wasn’t amazing, but that they felt safe enough with each other to laugh at the silly moments and try again. Tell us that all the expectations that innately come with saving your sexual selves into adulthood were or were not met. Give me something, throw me a bone, make them real people!

The plot, by the way, revolves around Saria and her twin sister being the victims of some sort of nefarious plot by a rich lady who wants Saria’s sister dead. That all happened in the first book, which has lead the twins and their respective bodyguards to be living on a yacht sailing around the South Pacific. The nefarious plot rears its ugly head at one point and Saria is abducted again. Ben the Bodyguard saves the day and they all sail off into the sunset and I’ll be completely frank – I did not care a whit at that point. I had no investment in these characters. I’m sure there was groundwork laid in the first book to make me invest and maybe if I’d read that first, then I’d be in a different position. But I didn’t, and I’m not.

If you’ve read the first book and want to follow the sister’s story, then definitely pick this up. Same for if stilted dialogue doesn’t bother you or if you love stories involving boats.