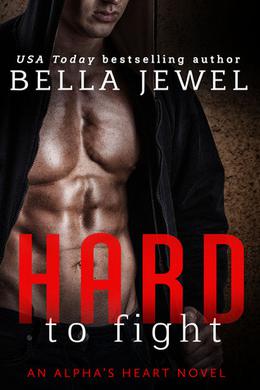 Hard to Fight by Bella Jewel should be renamed, “Hard To remember”. I’m sad to say that there was nothing very distinctive about this book that would make readers search it out as a destination novel. It tries to be a women’s liberation, groundbreaking kind of romance, but it wallows too easily in the ‘big strong men come to the rescue’ when life for the heroine gets overwhelming. That this happens far too fast and far too often makes any effort to be a feminist romance fizzle and unfortunately doesn’t leave any real impression on the reader of being a great book.

Sponsored links
Gracie, our bounty hunter heroine, is one of three daughters, two of whom rule the beauty queen pageant circuit and a mother who lives and breathes all things feminine and girly. Her father, a retired bounty hunter, seems to be the only one who genuinely supports her calling to bringing in the bad guys. Gracie finds herself outside of a nightclub one night, consoling some blonde fluff of a woman who is crying and distressed because her boyfriend probably does not want her anymore. Said boyfriend shows up, all hard bodied, oozing authority and sexuality, and Gracie takes him on, verbally sparring while trying to control her white hot attraction to him.

Bella Jewel (which, by the way, is the most awesome cheesy romance nom de plume I’ve heard in a while) gives us a club-going, partying, lady bounty hunter, who suffers the slings and arrows of her mostly goofy and slightly misogynistic male co-workers. Gracie works hard to be allowed to take down anyone more complex than a falling-down-drunk or a very low-level bail jumper, but sadly, she’s never been given the chance. Until Raide Knox comes along, that is. Raide Knox, a suspected fratricidal killer and assault suspect who skipped bail and is now a wanted man with a $30,000 bounty on his gorgeous head. And of course, he just happens to be the very same sexy motherf*cker from the club the other night.

Cue the self-examination. Gracie wonders endlessly if is really ready to take on this assignment. Can she handle her attraction to a wanted alleged criminal? Can she take down a man nearly twice her size with a cock and attitude to match? Most of her co-workers think not, but she makes a big deal out of wanting this case or else possibly leaving the firm she works at, so her bosses give her this chance. Now, what really got me, after Gracie spends her time convincing her bosses of her capability and demonstrating her kick-ass physical skills at bringing grown men to their knees with her self-defence and offensive moves, is that she is bewildered at how she will attempt to bring Knox in. Is this the same woman?

This is where most feminist minded heroines lose it in the romance novel world. When faced with an attractive man, suddenly we get the: How? Oh how will I ever take on the tough, super-hot and sexy badee? (Try saying this with a high-pitched southern belle accent and you just might start to get the sarcasm I’m trying to achieve here). Really people...we’ve had female police officers, firefighters and astronauts for so many years now, that this helpless female trope is a just a little old. Gracie is a licensed bounty hunter able to use (and just happens to be a kick ass shot) a handgun. So, umm, couldn’t that be the way she’s to catch him and hold him long enough for the cops to pick him up? Apparently not, because she hatches some hare-brained scheme to seduce, yes seduce! Raide just long enough until the cops can arrive to apprehend him.

In a nutshell, that’s why this novel didn’t fare well with me. There are far too many stereotypes and not enough modern solutions to make this book anywhere near believable. That Gracie can’t figure out what do for herself without consulting her best friend, her father and her own insecurities a thousand times makes it hard to remember the confident Gracie we are sold at the start of the book. Probably the only thing I really enjoyed was the fact that the story is written as if we are reading Gracie’s stream of consciousness, which makes the book slightly funny at times and endears her to us just a little bit because we get to be inside her head and not just witness to what happens to her.

Eventually, Gracie comes to believe in Raide’s innocence and can’t help her attraction enough to keep holding him at arm’s length. They end up having sex (really, really good sex as it happens), something that is totally unethical and against the rules of her occupation. That Gracie ends up trying to prove Raide’s innocence with all of the resources at her fingertips made me question her sanity and wonder if she was going to be one of those ladies who gets engaged to death row inmates. Well yeah, all in all, that just kinda sucked some of the romance out of the book for me.

But don’t even get me started on Raide! Raide was supposed to have beaten and stabbed his sister to death and then beaten her boyfriend to death when the cops found him bloodied and knife in hand, and wouldn’t you know it - he never told the police his sister’s boyfriend had been beating her for a while, so naturally Raide was charged with the crime while the boyfriend went free. Noble or stupid? I say stupid. That Gracie meets him because his latest fuck couldn’t stand the loss of him? Classy or skanky? Skanky I say. That all of Gracie’s family, friends and BOUNTY HUNTER co-workers support her in trying to prove this man’s innocence? Realistic or super-fiction? Super-fiction I say.

Overall, despite some good female-pleasure focused sex scenes, this book just doesn’t get to a place where the story, characters and sex gels. The characters are too flat, the scenarios too far-fetched and the outcome (after a kidnapping gone bad during which they have a quick fuck because they think they will die) are just too cheesy to be really satisfying. This book rates a 2.5 out of 5 stars.