Laid Out (Worth the Fight #4) by Sidney Halston 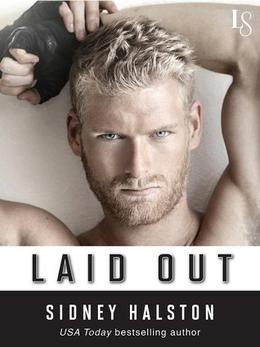 Sidney Halston’s Laid Out is, possibly, one of the worst books I’ve read this year. Characters fall flat, dialogue is stilted and uncomfortable, and true chemistry is conspicuously absent; while the plot capitalizes on a number of tropes and themes that have been successful elsewhere, Halston somehow fails to find the real spark in any of them. It’s disappointing, especially because while I’ve only recently stumbled into the world of romances revolving around MMA fighters, I’m perfectly aware of how well they can be done. (Hey, there are a lot of novels in the world! I know I’m late to the table. The sexy, muscular table. I’m sorry. Where was I?)

Sponsored links
Violet, Jeremy and Cain have been best friends since they were just kids. Growing up on military bases, they’d be separated for a couple of years here or there, but somehow, they all wound up together again for high school. Jeremy and Cain are Violet’s only real friends, despite a couple-year age gap. When the boys enlist at eighteen, leaving Violet behind to deal with the cruelty of her peers and her overbearing father, it’s hard on her, of course--but they’ve been friends since they were little. Time and distance can’t change that, right?

Of course, if teenagers have one talent, it is the ability to drastically underestimating the ravages of time. The years aren’t easy on Cain and Violet, and when they find each other again--Violet still coping with the loss of her father, Cain reeling from one too many deployments--leaning on each other is the most natural thing in the world. Can they help each other let go of the ghosts from their pasts? Or is it too late?

Unfortunately, the story veers off course almost immediately. Violet has the personality of a thirteen-year-old girl, which is incredibly uncomfortable. I get that romance novel heroines are sometimes written to be girlish and naive, but Halston blows past “fresh-faced and innocent” into “has the mind of an actual child.” This becomes a problem almost immediately, since no one wants to watch a person with the brain of a thirteen year old girl engage in sexual activity of any kind. Literally no one wants that, because it’s gross. The effect is exacerbated by Cain’s condescending, ultra paternalistic attempts to “teach” Violet how to behave in a way that will get her laid.

As a result of Halston’s misguided recreation of the Tom Hanks classic Big, Laid Out suffers from a serious lack of good sex. This, clearly, is the most egregious of the novel’s many sins. Do not be fooled, romance novelists of the world: the lady-porn is the only reason we keep reading these. You can screw up the plot, you can kill the chemistry, but I beg of you, please, please DO NOT SCREW UP THE SEX. If you interfere with our wank material, we will go elsewhere. Consider yourselves warned.

Even once Violet gets past her frankly bizarre attitudes towards all things sexual, the way that she and Cain hook up is just… weird. He’s paternalistic, overbearing, condescending when he should be supportive, and angrily dismissive when he should be kind. His immediate response to every emotion is to flee, which is bad enough, but the scenes where he’s supposed to be “sexily commanding” are the worst. Sample dialogue:

‘Why don’t you strip for me?’He sat back casually extending his arm over the back of the couch, his ankle on his knee. ‘I think this is getting weird. Isn’t it? I mean you just tell me to strip now like it’s your right. And I’m like this Pavlovian dog that follows your command?’ ‘Pavlov’s dog didn’t argue and I have a feeling you’re going to argue with me every time.’

Laid Out’s plot and character issues are only exacerbated by muddy prose and sloppy grammar. Phrasing is awkward, words are misused, and the whole novel would benefit greatly from a few hours with a dedicated copyeditor and a Big Red Pen. All in all, if you want hot sex, charming leads, and some good manly fighting action, I’d recommend looking elsewhere.