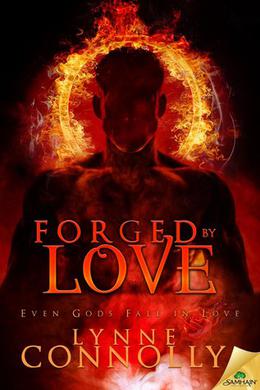 Ancient gods inhabiting humans and having love affairs is not really my personal thing. However, after a while of this, Connolly charmed me into really liking this story. I don’t think I’ll be returning to this series, however. Having two different planes of reality upon which these characters interact is just a little too much for me in my romance novels. I enjoy it in Percy Jackson, but not as much in this.

Sponsored links
This story centers around Venus and Vulcan – who are both currently possessing Regency-era England landed gentry. In mythology, these two characters are married but hate each other and several characters in this book make reference to this fact. When Vulcan (or Harry) first spots Venus (or Virginie), she is under an intense lust spell from Eros and is publically undressing and then having sex with Mars.

Through a series of events I didn’t really follow, the other immortals inhabiting London realize this is happening and they seek to break the spell. To be honest, I was also never really clear on why Eros did this in the first place and so the first ½ of the book was very confusing. If I wasn’t reviewing it, it’s possible I would have abandoned it.

After the immortals sort out that the spell of lust – which they refer to as an addiction – needs to be broken, it’s decided that Harry will marry Virginie to get her away from Mars (Marcus). In the mean time, however, a girl shows up on Harry’s doorstep with twin babies, reporting that Marcus is the dad.

So, lots of balls in the air with these lads. The story then becomes about getting to the bottom of Twingate and it’s about at this point in the story that I started to really enjoy it. The dynamics between Virginie and Harry were wonderful. They have lots of sex and the descriptions are well done and also varied. They talk about some of their sex as frenzied and feral, other as tender and tempting. The evolution of their relationship makes sense within the story and I enjoyed it. The resolution of the Twingate issue is believable and involves further emotional intimacy between Virginie and Harry.

If I was just rating the book on it’s second half, it would be a 4. The first half, however, is a 2, so that’s why I came out at a 3. I have a feeling that anyone who has read the first two books in this series will have no issue with the first half – it was a lot of backstory with not enough explanation for someone new to this world. That sounds contradictory – let me explain.

We spend a lot of time - a lot of time - discussing the intricacies of this spell Eros cast and what it’s forcing them to do without ever really explaining why the spell was cast. We meet all these gods, but it’s never said how or why they’re inhabiting mortals. They mention a name which from context clues I know is a villain, but don’t explain who or what that name really is until nearly 400 pages into the book. Also, there was this whole thing at the end with a character randomly appearing and there wasn’t enough groundwork laid for me to know why they were there. It was all a bit bizarre at times. There was nothing provided to center new readers and no way for me to know what the actual hell was happening. Disorientation is not a feeling I treasure in my novels.

Once she got the main romance cooking, Connolly wrote and crafted the story well and, like I said above, I really fell for Harry and Virginie together. (Although, side bar. Can we take a hot minute for that name? Virginie is not my favorite.)

This one is recommended for fans of paranormal romance, I think, for sure. I’m not 100% sure folks who aren’t into the subgenre should treat this book as their entry point. However, Connolly’s writing is grand, so if you want to – I’d recommend giving the first in this series a go. While they are stand alones, I would imagine she does a bit more world building – which I feel is super necessary – in the first book.