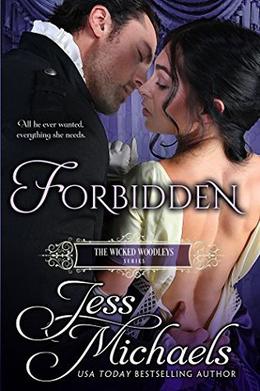 Forbidden is the inaugural book of Jess Michaels’ regency series, The Wicked Woodleys. Loaded with sex, scandal, and endlessly likable characters, Forbidden is sure to be a hit with any fan of historical romance.

Sponsored links
Audrey Woodley, in true regency tradition, is bright, spunky, and stubbornly unmarried despite creeping into her late twenties. Though she’s not yet an old maid, Audrey knows that she can’t be lackadaisical in her search for a husband; but in a family already haunted by the aftermath of not one, but two disastrous marriages, Audrey can barely bring herself to contemplate matrimony, let alone pursue a man. Thankfully, Audrey’s mother--sensing, perhaps, her daughter’s frustrations with the London season and the resultant pressure to find a man--suggests a pleasant alternative. Rather than pursuing the relentless schedule of dances and social obligations, the ladies decide to retire to the country, commencing a long-overdue renovation of one of the family’s rural homes.

While the ladies are looking forward to a refreshing retreat from town life, Jude Samson is slowly realizing that he is about to endure several of the most trying weeks of his life. While the Woodleys have essentially adopted him as one of their own, and he loves the Woodley boys like the brothers he never had, his feelings towards Audrey are anything but familial. He’s carried a forlorn love for the young woman for years, never hinting at his feelings but unable, even so, to let go of them. When he’s asked to chaperone the Ladies Woodley on their excursion, Jude knows that he’s going to be spending a lot of time in uncomfortably close proximity to the object of his affections; and with his feelings growing every day, Jude knows it is only a matter of time before he loses control.

Since this a regency romance, it takes all of fifteen pages for our romantic leads to be thrown together in all kinds wacky and sexy ways. Jude and Audrey are doing the Pantaloon Polka before you can say “irreversible scandal,” and it’s all fun from there. It's really sex-heavy (premarital sex heavy!!) for a period piece, which can feel a little odd. I don't usually expect to find blowjobs and butt stuff, however minor, in my regency novels. But the sex is pretty grand and a little dirty, and perfectly in line with Michaels prior works, so it’s not that much of a shocker. I never know if the smut-heavy regency novels are more or less accurate than the chaste ones. It's hard to tell how much sexing actually occurred in notoriously prude eras of history, you know?

Audrey is super cute and spunky in tried and true romance heroine fashion. Jude is, of course, sweet and sultry and impossible to resist. He’s a bit dirty, too, but in an endearing way, rather than being off-putting. Where Forbidden really shines, though, is all the secret background drama. Michaels gives us scandal and dark secrets, intrigue and meddlesome servants, and it’s delightful.  ESPECIALLY the scandal with Claire. What is she up to? What is happening? It’s all dark and dramatic, with her scary criminal husband and her refusal to come back even though she clearly wants to--WHAT ARE YOU UP TO, CLAIRE? TELL US. WE CAN HELP.

Maybe not the best regency novel I've ever read, but really good. Our male lead is sweet and kind and honorable and hits all the right notes of "oh my god I MUST have you" and "my darling I could not dream of exposing you to scandal!" I especially like that Audrey is in no uncertain terms the agent of her own future. Nobody is putting baby in the corner, because this girl has PLANS, and she intends to see them through. Come hell or high water, Audrey gets her way, and with her sights set on Jude, the poor guy doesn’t stand a chance. Honestly, especially in the regency genre, it’s refreshing to see a woman giving her guy a quick up-and-down look before cordially inviting him to remove his pants--rather than spending half the novel gibbering about “propriety” while the male lead tries to get under her gown.

Quick aside--what’s with the covers of regency novels these days? I realize that “couples chastely regarding each other from a safe distance” no longer cuts it, but have you all noticed how historical romances lately always feature men in tuxedos and women in prom dresses? Like, super-modern, slinky, satin prom dresses. It’s a little weird, that’s all I’m saying. Do we not have the budget for slightly more accurate costumes in our photo shoots, or have we just given up on cover art in the era of ebooks?

I think Michaels’ Notorious Flynns series might be punchier in terms of character development, but The Wicked Woodleys has promise. I look forward to seeing it develop, and I am especially intrigued to see what happens with the mysterious and troubled Claire. All in all, Michaels has delivered another charming and engaging regency romance, one with spark and sex in equal measure.