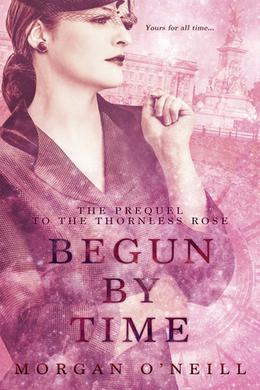 Begun by Time is a prequel to The Thornless Rose, which is billed as an “Elizabethan time traveling series”. In The Thornless Rose, we meet Jonathan Brandon, who mysteriously disappears from a London pub just after the end of WWII. And by disappears, I mean that literally – playa just vanishes from his seat, leaving all of his belongings behind. He leaves behind a distraught fiancée – Catherine – and a raft of bewildered folks.

Sponsored links
Begun by Time is the story of Jonathan and Catherine and Catherine after he disappears. It isn’t really a time traveling book in the traditional sense – the narrative largely takes place in post-war London. For readers of the other book, this one will fill in lots of gaps. I haven’t read Rose yet, but I’m now anxious to see what happened to Jonathan so I’ll probably pick it up!

If you’re someone who enjoys time travel romances but hasn’t read Rose, I think I’d start with that one. It seems to have the heaviest of the time travel story line – this one more teases with it. For instance, Jonathan has these flashes of Elizabethan England – like visions or something – before he ends up fully traveling, but we don’t really go with him. This really is more a book about who gets left behind when one time travels, so to speak.

The book starts during the London Blitz and with Catherine and her colleagues who are working for the British Red Cross tending to wounded soldiers. As they’re walking home from work, a shell is dropped and not only are all the ladies injured, their boss is killed. At her funeral, Catherine meets the woman’s son – Jonathan - and the two begin a romance.

For the next several chapters, it is a well-written, robust post-war romance. The pair get engaged on a historic day and then have a re-do on the beach in Brighton to make it more “real”. They discuss wedding traditions in an age of rationing and deal with how to set up a life with each other when his job as a military doctor will still call him away.

Just before their wedding is when Jonathan vanishes and the next bit of the book deals with Catherine’s tangible grief about that. She treats it like a death, a haunting mysterious one but a death nonetheless. She can’t really believe he’s gone and has no real idea what to do with herself.

But, since we know her granddaughter is the heroine of the first book (spoiler!) clearly she has to find love again. Enter Arthur, whom she meets on then-Princess Elizabeth’s wedding day and the two form a quick bond. Of course, Jonathan’s memory continues to be something Catherine has to deal with. She wrestles with guilt and how to tell this new man that her former finance may or may not be some sort of ghost.

Catherine finds her happily ever after with Arthur and he certainly seems a treat of a human. I was glad they found each other and their story is sweet. There’s a few moments that felt a little saccharine to me – their wedding is a little too perfect, as is their engagement – but I suppose after having a ghost fiancée mystery hanging over one’s head, they deserve a bit of schmaltz.

There is one sex scene. While Catherine and Jonathan were souls of propriety and were planning on waiting until their wedding night to consummate their vows, Arthur and Catherine are not so patient. She’s a virgin, of course, and he’s not, of course, but there’s little mention of that discrepancy. While they do mention condoms, the main concern is pregnancy and it made me wonder if during that time, at the beginning of the National Health Service in the U.K., if they had any ubiquitous public notion of prevention of sexually transmitted diseases. Call the Midwife would lead me to believe no, but this is not a time period I am an expert in. The sex scene, for what it’s worth, is well written but not anything groundshattering. This is more of a sweet romance of the heart than of the body.

Because I had no idea as I was reading what happened to Jonathan (I didn’t read any of the back cover copy before jumping in), I was compelled greatly by this story. When Catherine met Arthur I was nervous that Jonathan would show back up and the poor girl would have no clue what to do. It’s a sweet story – one I would pass on to my mother or aunt – and I would definitely recommend the series for anyone who enjoys a light romance that spans centuries.