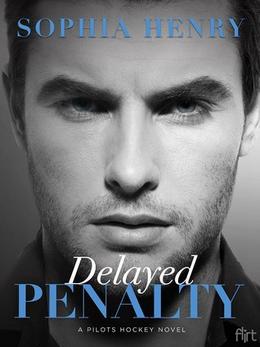 Auden Berezin has her hands full. In her junior year of college, she’s been cut from the school soccer team--and lost her sports scholarship with it. Home for the winter break, she’s not surprised when her grandfather announces that he’s found her a job. He’s a bit of a hardass, if she’s honest with herself, a Russian immigrant who taught her to speak the language fluently. He frequently passes along little translation jobs for her to do, popular literature, business contracts, that sort of thing. The newest job is a little something different, though; for the first time ever, Auden will be interpreting for a real, live human being. Even better, especially for a girl born and raised in Detroit? He’s a hockey player.

Sponsored links
Aleksandr Verenkov is a talented player and an asset to his team, despite his poor grasp of english. He’s a rising star, and while everyone is pretty sure he’s NHL-bound, it’s important for him to polish his image and improve his ability to communicate with the media a bit before he’s ready for the big time. To help him out the league hires him a translator, and Aleksandr is pleasantly surprised when not only is she, well, a “she,” but she’s gorgeous, smart and sharp as hell. Much to his chagrin, Auden doesn’t really want anything to do with him--but fortune favors the bold, and Aleksandr isn’t easily dissuaded.

Before long, Auden and Aleksandr are falling for one another, and the chemistry is unbelievable. Auden knows Aleksandr should be off-limits, but she can’t help herself, even though she knows her heart’s at risk. NHL players aren’t exactly bastions of stability, and with Auden’s bleak history, the last thing she needs is someone who can’t follow through for her. Can Aleksandr be that man? Or is Auden setting herself up for yet another betrayal?

If you have a thing for hockey players or Russians or Russian hockey players you will probably be rather pleased with Delayed Penalty. Auden and Aleksandr are warm and well-written characters, and their mutual attraction is steamier than it has any right to be, considering that they barely touch each other until the third act. Auden is realistically flawed and more likeable for it, despite Henry laying it on a little thick when it came to Auden’s better qualities (sure, you’re just a single-handed charity starting machine with a previously undiscovered but stage-ready talent for singing and soccer skills good enough to land a scholarship, no biggie. Oh, and you’re fluent in Russian, but yeah, that’s all pretty normal.)

Aleksandr is more believable as a kind but flawed young man with a bit of a drinking problem but a good heart. He’s beautiful and broody, but without the self-pitying bent that makes so many “troubled young man” characters somewhat obnoxious. Both of these characters are struggling with backgrounds that would throw anyone off the rails--absent parents, lonely childhoods, psychological scars that have left them fragile and angry despite all their attempts at coping. I appreciate Henry’s refusal to fall back on the old and tired “my relationship fixed all my problems!” trope. We don’t need any more of those. Two characters acknowledging that, “hey, we’re still pretty f*cked up but I love you and I think we can pull this off with a lot of hard work” may be less satisfying, but it’s much more authentic to readers who are trapped in the boring old real world.

Delayed Penalty  is actually more romance than sex, which is kind of nice in the long run.  There’s plenty of steamy buildup, but Auden and Aleksandr take their sweet time boarding the train to pound-town. The foreplay is lovely, but even those scenes are short and often interrupted. This particular novel isn’t really about the wank material, so if you’re looking for serious lady-porn, this might not be your book. Seek your girly boners elsewhere, friends! However, as a sports-themed romance, I have to register my extreme displeasure at the lack of sexual hockey puns. Alas, I am disappointed yet again. Come on, Henry, they write themselves!

Overall, Delayed Penalty is a well-written story about two pretty messed-up people figuring out how to have a functioning human relationship. While it may not be a nonstop sexathon, Henry has given us a sweet, authentic novel that I’m sure most readers will enjoy.