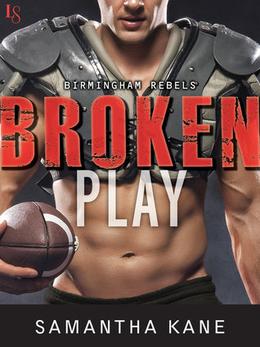 Broken Play is the premier novel in Samantha Kane’s new Birmingham Rebels series, and longtime fans will be unsurprised to hear that it involves big burly men, southern accents, and about three hundred pages of those burly men exploring their forbidden desires--except this time, they’re doing it in locker rooms. Broken Play follows Beau Perez and Cass Zielinski, the inseparable breakout stars of the NFL’s Birmingham Rebels. The Rebels have a reputation for being a “last-chance” team, one full of problem players who are too disruptive, too damaged, or simply too worn-out to be drafted elsewhere. Beau and Cass have their own notoriety to overcome; their relationship is a little unusual, especially in the football world, and Beau’s past struggles with addiction don’t help. Still, they’re determined to make this the year that the Rebels show the league what they’re capable of, despite the odds.

Sponsored links
Marian Treadwell may be new to the team, but she is, if anything, more determined than Cass and Beau to prove that the Rebels have something worth fighting for. As the team’s new assistant offensive coach, Marian has just a few weeks to get the team in shape or risk losing her job. The pressure’s on, and there’s no denying that it won’t be an easy task. Still, Marian sees something in this team, and she knows they can pull it off--until she finds herself in a taboo and very much complicated tryst with not one, but two members of the team. Can Marian keep the team together even as she explores her desires? Or is the whole thing going to blow up in their faces?

Full disclosure: I’m not a football fan. As someone who does not watch the sport, I tend to associate football players with two things: domestic violence and fresh-faced Christian ideology. You know, family values and whatnot. The NFL of Kane’s imagination, though, is a barely-contained pansexual bacchanal that constantly threatens to explode in a flurry of muscular arms and exposed erections. That, my friends, is a sports league I would spend every Sunday watching. Although I have to point out that there was not a single joke about catching balls in the entire novel, and I am thoroughly disappointed. A golden opportunity was missed here.

Broken Play is, admittedly, a fairly silly novel. Burly football players earnestly declaring their love for one another using sports metaphors is probably one of the sweetest and most absurd things I’ve ever read, and considering that I review romance novels, I have read a lot of absurdity in my time. Beau and Cass are perfectly endearing, of course. I’m not implying that there is anything laughable about a deepseated love between two men: I am implying that it becomes extremely funny when they elect to voice that love using somewhat tortured football analogies, repeatedly, sometimes whilst naked.

My last bone to pick (promise!) is that the rapey trauma subplot was, frankly, unnecessary. Kane has a weird habit of making the women in her novels rape victims or abuse victims, and I wish she’d knock it off. If you’re going to write a novel about a sports team having a delightfully unrestrained sexual free-for-all, just own up to it. I appreciate that Kane is attempting to illustrate the damage done when people are ashamed of their sexual desires, and I agree that a novel like this is the right place to explore that theme; but there are other ways to handle that particular question. Tossing in Marian and Danny’s particular backstory made the whole thing feel less liberating and more like two people who are trying to replace therapy with sexual contact, and that’s just not healthy. I also cannot, in good conscience, recommend attempting to help someone work through past trauma by throwing them a surprise orgy.

Kane does try to flesh out the relationship between our three leads, and does a decent job at portraying a polyamorous relationship that is founded on good communication and great sex--so I’ll give her that. Overall, though, Broken Play is middling, as romance novels go; but it’s not really a romance. It’s 400 or so pages of straight-up, football-themed, kinky as hell erotica. With that in mind, Broken Play manages to deliver plenty of thoroughly enjoyable smut, ranging from standard dude/lady action to the aforementioned “therapy orgy.” The sex is well-written, well-paced, and has a little something for everyone. Readers will definitely enjoy Cass, Beau, Marian and the rest of the team as they make their way into a variety of compromising positions. It’s raunchy, dirty smut, and if that’s what you’re looking for, you’ll certainly find it here.

All in all, Broken Play is a quick, kinky read that fans of Kane’s prior work (or just fans of bisexual threesomes) will be sure to enjoy. While the plot has some minor issues, it interrupts the smut rarely enough to be a negligible issue at best. Read this one alone and with a glass or two of wine--you’ll have a blast!