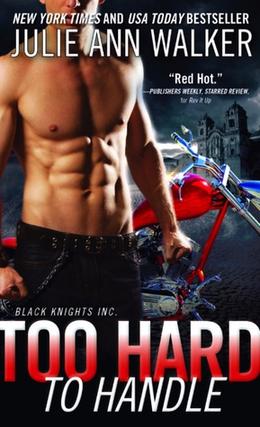 Julie Ann Walker’s Too Hard to Handle is the eighth instalment of the Black Knights Inc. series, following the adventures of her ultra-manly spies slash biker gang slash custom motorcycle builders. Because why go through the trouble of having to choose between writing about spies or motorcycle clubs when you can just have them both at the same time? Motorcycle-riding spies for everyone! It’s like sexy job Christmas.

Sponsored links
Walker’s latest details the budding romance between Dan Currington, the troubled but talented Black Knights operative who is still reeling from the death of his wife several years earlier. Despite a long struggle with grief and a lengthy stay in the bottom of a bottle, Dan has pulled himself back together and is back in the field. He’s even allowed himself, tentatively, to care for a woman again; Agent Penni DePaul, a Brooklyn-born firecracker he met several months prior to his current assignment. Although they’ve been separated since, and the odds of them crossing paths again are slim at best, Dan can’t help but remember their brief but passionate fling in Kuala Lumpur. Her body, her attitude, her spark--he dreams of her, still, misses her, almost enough to distract him from his current mission.

The current mission, though, is an important one. Tracking down their current prey, a traitor who sold U.S. secrets for his own gain, takes all the concentration Dan can muster. After months of empty leads and frustrating holdups, the team is finally closing in on their mark. With Zoelner by his side, and ably assisted by their new CIA contact, Chelsea, Dan is determined to complete his mission in Cusco, quickly, cleanly, and without any undue trouble.

Until trouble arrives in the form of one (former) Agent Penni DePaul. Since the tragedy in Kuala Lumpur, Penni has been lost. The deaths of so many of her teammates and colleagues was profoundly affecting, and she hasn’t quite recovered. So despite her love of her job, Penni has resigned from the Secret Service and travelled to Chicago, hunting for Dan for reasons that she’s keeping close to her chest. When his friends and teammates tell her that Dan has gone to Cusco on a mission, Penni knows she’s come too far to turn back now. Besides, the team assures her that Dan’s mission has been one big dead end. It’s not like she’ll be interrupting anything important!

Dan Currington and Penni DePaul have an undeniable chemistry. Despite the escalating violence, Dan and Penni quickly reconnect emotionally and, before too very long, sexually. Walker has created quite a pair here, romantic leads who can transition from seduction to silliness to deadly seriousness in the blink of an eye. The smut between them is oft-interrupted but well done, and readers will find plenty to keep them, ah, occupied.

Outside of the bedroom antics, Walker’s plot is largely well done, although all the action can lean a little towards the hectic. Penni has a dark secret that she carries around for most of the novel, and there’s plenty of tension as we try to guess what it is (it’s not terribly dark, in the end, but the way she hints at it for the first three acts, you’d think she’d personally murdered and then eaten Dan’s first wife.)  On the plus side, though, Too Hard to Handle is fast-paced and entertaining, with quick wit some pretty good jokes. Watching Zoelner and Chelsea flirt at a mile a minute is endlessly entertaining, and I’m sure that their inevitable novel will be delightful. For all that this novel has the trappings of a spy thriller, though, there isn’t much suave spy stuff going on, which I found a little amusing. These guys are less Bond than the cast of The Expendables, all crass jokes and raging testosterone, nary a suit in sight. If you like your men sweaty and slightly immature but quick-witted and fiercely protective, the Black Knights are your guys.

There is a British character whose last name is Wodehouse (really!?) and who sounds like every episode of EastEnders was tossed into a blender with a single character from Downton Abbey. Walker, dear, you may have laid it on just a little thick. Outside of Wodehouse’s inherent silliness, though, the villains are suitably ominous and the plotline sufficiently mysterious to keep your interested.

There’s an overarching mystery that we don’t get a real conclusion for; fodder for the next novel, no doubt. All in all, Too Hard to Handle is lots of shadowy Bad Guys and high-octane shootouts with a healthy dose of smut on the side. Dan and Penni are as likeable as they are sexual, and readers will enjoy watching them banter almost as much as they’ll enjoy watching them boink. For a fast-paced, action-heavy read, Too Hard to Handle fulfills its promises.