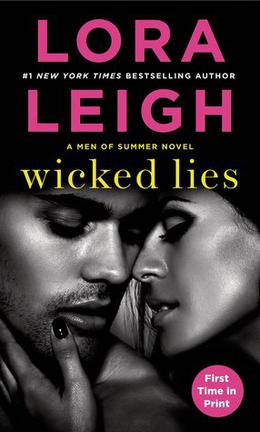 Lora Leigh has written some real doozies in the past, so I was expecting a good old shit show from this book. But to my great surprise, she seems to have almost gotten the hang of keeping to one storyline, with some semi-plausible action and a really solid couple who have plenty of deeply satisfying sex scenes.

Sponsored links
This is a story of mountain people - the kind who raise their own militias and stockpile arms and supplies in case America is ever invaded by another power. This is a very unorthodox group of people to write a romance about, but hey - even quasi off-the-grid folk need love and a good shag too.

In the first chapter, we meet a young woman of twenty six who has been on the run for the ten years since her mother was killed. She herself was shot during that fateful night in a hotel fire during a shopping trip to New York by the very same militia group her family belongs to. Ever since then, she has been trained by her military-man secret half-uncle (that the rest of her family never knew about) in methods of self-defence as well as how to stitch up her own wounds without anesthetic.

Every couple of years, the Kin, as this mountain militia is known, catch up to her and attempt to kill her yet again, and so she has to move to keep herself safe.

Figuring the best place to hide is back in her hometown working as the local kindergarten teacher (aww), Kenni (short for Kendra), has spent the last two years wearing coloured contacts and dying her hair. She has also spent the better part of the last two years fending off the advances of the man she realized she loved just before she had to go into hiding. Jazz is his name and he is a dreamy piece of man-hunk whom all of the local belles brag about bedding, and he too is a member of the Kin with troublingly strong ties to her family.

Kenni’s logic in coming back home is to hide in plain sight and to try and figure out if Jazz can be trusted to help her as well as trying to suss out what role her father and brothers may have had in her mother’s death, as her father is the Leader of the Kin and rules it with her brothers as his seconds in command. That there are rumors swirling around that her father was messing around with her mother’s sister in the months before her mother’s death, only complicates matters as he married the sister a paltry eight months after the death of Kenni’s mother.

I will be honest that it took me more than a few chapters to figure all of this out. The first four chapters contained all of this information, but in a very mixed and convoluted way. If you can make it past that roadblock you’ll encounter some decently written chapters that document the feelings Jazz has being slowly released for Kenni, and the deep love that he allows himself to feel for her when he finds out exactly whom she is when her DNA test comes back (don’t ask - the Kin have FBI connections - a favourite theme of Lora Leigh books).

To say that the mystery of the Kin trying to hunt and kill Kenni is a bit of a twist would be an understatement - this is the motor that drives the plot. Kenni has spent a good portion of her life on the run and experiencing violence because of who she is and whom she is related to. That she has not yet figured out who was actually behind the initial attempt on her life (and responsible for her mother’s murder) keeps the interest in this mystery alive for the many chapters the riddle is dragged over.

Though the book starts out in a confused way, revealing details haphazardly, the middle portion is generally clear, though repetitive, and the ending is somewhat predictable. It would appear that Ms. Leigh has finally found herself an editor who, it seems, has made her stick with one couple, one topic and one mystery to solve. There are no jumping timelines here, no storylines that make one shake their heads while saying “Really? A sex club in the middle of an attempted murder?” and thankfully, no threesomes (don’t ask - but you can read my review of her previous book on www.romanceandsmut.com).

The sex is in this book, however, is absolutely exquisite. This is the area that Lora Leigh shines. Jazz is tough, sexy with a well-muscled body and dirty mouth that has a penchant for describing the kind of fucking he likes while going down on and enjoying the lady parts of Kenni...multiple times in one session. I mean, you can’t write better sex that includes the ‘slow-realization-of-being-in-love’ scenes any better than that. A definite 5/5 for those who enjoy a good blow job scene. Ms. Leigh makes sure you know just how much both Jazz and Kenni enjoy sex, dirty sex, bed sex, supportive sex, grieving sex and just about any other kind of emotional sex you can imagine.

Once the jig is up for the mystery of the killer’s identity and the power behind the attempts on Kenni’s life is caught - it is a bit of a let down - I was hoping for something far more spectacular and much less pedestrian than the culprit it turned out to be. Then things begin to settle down pretty quickly with Jazz declaring his love for Kenni. We find out that his trampy ways over the ten years she has been presumed dead were only a way for him to act out his grief at her loss because he always wore a condom and never got emotional with any of his many conquests.

Kenni, on the other hand had saved herself for Jazz, and was a virgin, yes!, a much appreciated virgin when she first has sex with Jazz. That was pretty believable, considering she had been on the run for so long, and was only sixteen when she had to flee. What was a bit strange however, was that the house Jazz built was the exact replica of the description the sixteen year old Kenni gave him of her ultimate house, right down to the gazebo with a bed and gauze curtains in it - ready for an afternoon snooze. But, seeing how this is a Lora Leigh novel, it never pays to think that deeply about details that should be fleshed out - otherwise you will not enjoy the sex and romance aspect of this book, which thankfully, is quite satisfying.

At the very end of the novel, we find out that the murderous culprit behind Kenni’s misery has been turned over to the Feds, who are referred to as the Kin leader’s boss - and this is an interesting detail that never gets explained. We are then left to wonder if the Kin is a quasi secret agency kind of organization, but I digress. Just remember - if you don’t think too hard about details like that, you will enjoy this book, but if logic is a requirement for your reading pleasure, you’ll understand why this book only rates a 3 out of 5 stars.