In Her Defense (Time Served #2) by Julianna Keyes 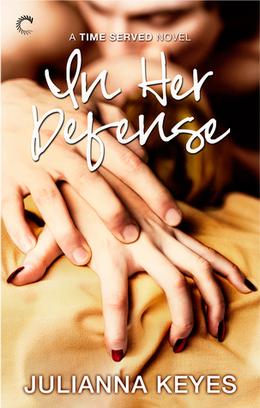 Caitlin Dufresne defines what it means to be a workaholic. A fifth-year associate, she’s at the top of her field and ascending higher every day, with little regard for what she leaves in her wake. Hobbies, relationships, the very concept of spare time--Caitlin isn’t interested. All Caitlin wants is to win. After a string of escalating mistakes and too many nights spent sleeping at her desk, however, Caitlin’s bosses lay down an ultimatum: take a break, recharge, and learn to play nicely with others, or find another law firm.

Sponsored links
When Caitlin meets Eli Grant, she’s utterly at her wit’s end. After years of eating, sleeping and breathing the law, Caitlin barely knows what to do with herself when she’s not in the office. Eli, thankfully, proves to be a very interesting diversion. He’s a handsome, laid-back, multitalented guy who not only seems to actually enjoy Caitlin for who she is, but isn’t afraid to tell her when she’s being a bit of a bitch.

Caitlin and Eli’s fling is just a temporary diversion--they both know that. After all, Caitlin’s moving to L.A. at the end of the summer, and Eli has plenty to keep him busy in Chicago. Neither of them is looking for something permanent. And yet, as the weeks go by, Caitlin finds herself connecting with this man in ways she’s never allowed herself to before. For the first time in her life, she’s truly vulnerable. But can she let go of her workaholic ways and really, truly let someone in? Or will work always be her first love?

In Her Defense has a lot going for it. It’s well-written, for starters, and Caitlin is an engaging character, for sure. Well, she’s a driven, sort of bitchy maneater, and I kind of love her for it. Her slow transformation from self-absorbed workaholic is charming, but it’s the “take no prisoners” attitude and terrifying intellect that I really enjoy. She’s plenty damaged, of course: more interested in slaughtering the opposition than making any time for herself, too busy for even the ghost of a relationship. Still, she’s impressive, and occasionally terrifying. It may be wrong of me to enjoy her “pre-Eli” character so much, but if you like romance heroines with a good head on their shoulders, you’ll genuinely appreciate Ms. Dufresne.

Eli, on the other hand, is just a big old mess of a guy. He spends a huge chunk of the novel hung up on his previous girlfriend (who cheated on him with his best friend), and manages to bounce from being sweet and generous to petty and paranoid quickly enough to give you whiplash. It’s a bit of a Jeckyll and Hyde situation, and readers may find themselves trying to decide whether they like Eli, or at the very least, “which” Eli is the real one. Keyes did a good job drawing a hero whose issues are a clear foil for Caitlin’s damaged self, but he does come off a bit manic at times. Because of this, the big emotional reveal at the end feels a little perfunctory. Like, sure, buddy, you’re definitely not pining over your lost love anymore! I definitely believe you. 100%. No doubts here.

It’s possible I’m being a bit harsh, but that might be because Keyes dropped an almost absurd amount of drama on an already conflict-loaded plot. It’s disappointing precisely because the novel is so well written, and because the first half of In Her Defense was so promising. Keyes sets up a killer plot, emotionally damaged characters tangled up in a deeply sexy fling, and a ticking clock: that’s plenty. Unfortunately, the novel is rife with weirdly contrived misunderstandings. Petty jealousy isn’t cute on people who are young enough to excuse it, let alone adults who are (I’m guessing) supposed to be in their thirties. Snippy text messages and ignored phone calls just aren’t endearing, nor is automatically assuming the worst of someone that you’re sleeping with. I can’t count the number of times that Caitlin or Eli get childishly cranky and jump to conclusions rather than just asking what the hell is going on, and it simply isn’t necessary. Is Caitlin kind of a bitch? Absolutely. Does Eli have trust issues? Oh goodness, yes. Does this necessitate throwing a tantrum because one of them is within five feet of the opposite sex? Well, it depends: are you a grown-up, or a group of children in an oversized trenchcoat?

Thankfully, Keyes’ writing is strong enough to carry the day, especially when it comes to the smut. In Her Defense is just on the polite side of straight-up erotica, and Eli is no slouch in the bedroom. I particularly appreciated the way Keyes addressed Caitlin’s trouble with staying focused during sex: it’s not an uncommon problem, and Eli’s solutions are both endearing and practical. Plus, these two get up to it all over the place. Dive bars, pickup trucks, the bed, the floor, hallways, stairwells: they can’t keep their hands off each other, and you, dear reader, will enjoy their lack of self-control. In fact, one could simply read the first half and then just skip ahead to all the sex scenes for the rest, and you’d still have a great time.

Overall, In Her Defense has a lot of promise, despite a few stumbles. Readers will certainly enjoy the characters, the setup, and the ample, ample smut--and based on the quality of her prose, I’d recommend looking out for whatever Keyes offers next. However, the plot here stumbles in the final half, focusing on empty drama over meaningful conflict, so readers who are easily frustrated by that sort of thing may want to just skip ahead to the naked bits, because they will not disappoint!