Fire Me Up (Deacons of Bourbon Street #2) by Rachael Johns 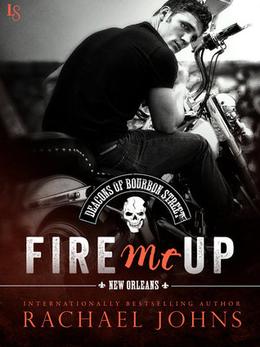 Travis and Billie. Two super-unlikely candidates for some steamy hot sex, yet, they somehow find a way to make each other and us, hot under the collar with their story. The sex is fast, hard and rich, but the plot is lukewarm and thin. As the second installment of the Bourbon Street Motorcycle Club saga, I expected a whole lot more story than was given, but if you’re happy with some excellently written white-hot sex, this book won’t disappoint!

Sponsored links
Travis, our tall, heavily muscled, bad boy turned legit, is a lot of an enigma - a biker with an MBA. Yes folks, that’s what I said. A biker with an Masters of Business Administration. He wants to go completely straight and leave New Orleans once this business with the Club is taken care of, but he craves the brotherhood of the Motorcycle Club. Now, quite suddenly, he also craves the love of a woman that he can’t get enough of - even if they started out snarling at each other only to end up in bed three days later.

Billie is a petite, blonde, airy-fairy transplanted Aussie who has taken up residency in the Big Easy as it’s the only place that has truly felt like home to her wandering spirit. She is a repressed artist who runs a gallery for the tourist trade and has in the past let everyone else in her life dictate what she needs to do with her life. That is, until she freed herself through a divorce from a controlling douche named Saxon (total romance book made-up name) and came to New Orleans.

“Fire Me Up” is the supposed plot continuation of the first book in this series. The plot being the Motorcycle Club’s President Priest’s death by running his motorcycle off of the road. This tragedy brings all of the main biker characters back into town for his funeral and the reading of his will. Each of the returning banished bunch - Cash (Travis), Prince and the one whose name I can never remember - will all eventually get their own romance books (yay - ‘cause Ms. Johns knows how to write excellent biker up-against-the-wall sex), and hopefully Priest’s death will be resolved sometime within the series.

The plot advancement of Priest’s death is that it has moved from the suspicion that it was not a motorcycle accident that killed him, to the finding of proof that a large amount of money exchanged hands in a rival Motorcycle Club right after his death - pointing to some kind of hit. The relationships of the members of the club is in tatters, and this was an area that I didn’t feel got it’s due. At this point, the reader needs more reason to understand why any of the guys would want to stick around and play dress up and go to war on their shiny motorcycles when most of them have lucrative jobs and lives in the straight world.

As well, the relationships between the women in this novel are also very dry and stilted. Call me old fashioned, but when a woman moves continents and sets up shop solo, she often will make a few girlfriends who provide some sort of moral support to her efforts - hardly a strange thing in a city of transplants that New Orleans can be. All that Billie seems to have by way of emotional support is the moody attentions of a male artist whose romantic aspirations she has to gently crush, and a ‘hello/goodbye’ relationship with Sophie, the previous heroine of the last installment.

This is where Ms. Johns has sort of dropped the ball in her attempt to make this a continuation of the Club’s story. While highlighting a new romance of another of the Club’s members, she has come up short working the other aspects of a good connected novel into place. Relationships, underlying plot information, flashbacks, clues to the present day shenanigans of the rival Motorcycle Club. So much is missing from this book that could and would elevate it to an entirely different level. I don’t think I’m being unfair here. These are not such heavy and complex questions that one wouldn’t expect them to be dealt with by a competent writer - and Ms. Johns is easily that, but they are missing from “Fire Me Up”.

The only real plot advancement is that we now know that Travis is a computer hacker who desires to avenge his President’s ‘hit’ and that while he wants the club to be completely legit, he is struggling badly with the course of action he should take now that he has discovered hard evidence that Priests death was no accident. The desire to go legit - as Travis has done in his ten years away from the club - is at odds with his desire to wear the cut and ride with his bros. Travis gets the time and effort from Ms. Johns to reveal that he is now a security expert and has a thriving business for himself, but we also get a glimpse into the trauma of his childhood, which explains his initial need for the family hold of the Club.

Billie herself transforms from the somewhat sexually inexperienced and sometimes prudish heroine as she averts her gaze when she happens upon Ajax sucking the pussy of his ‘old lady’ Sophie (don’t ask). Her ‘butterfly moment’ comes as she revels in all her glory, fucking Travis against the back wall of the Priory bar for all to see (I think this will become a trademark of all the biker couples as the series progresses). Billie’s sexual transformation is the star of this book. Ms. Johns keeps us privy to her thoughts and tangled emotions and we cheer her throwing off the shackles of what good-girls are ‘supposed’ to do in the bedroom. We get to see Billie revel and grow in the delights of sharing her body with the man she is desperately falling in love with.

The sexual emancipation of Billie is the real star of this book and that is why it rates a 3.5 out of 5 stars, even though the underlying plot is visited in fits and starts in such a way as it left me asking very blunt questions about the history between the rival motorcycle clubs and the shady characters who dwell on both sides of the law. Sometimes a really good fuck - or multiple fucks, can make up for a thin plot or poorly fleshed out twists in the action. Ms. Johns skill is in writing what goes on between the sheets, and as such, we can only thank her.

While I do hope that future installments of this series get a little more plot rich, who am I kidding? The back wall of the Priory is one place I definitely hope to be revisiting in her next book!