Pursued by the Devil by Carole Mortimer 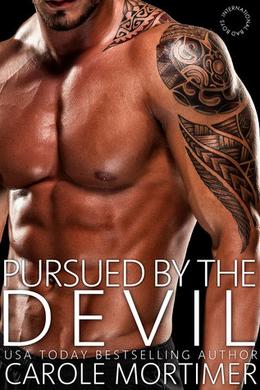 So, petals, here’s the deal. Everyone has their turn-off tropes, right? Some people cannot deal with friends-to-lovers, thinking it too contrite. Others shut the book the minute a delightful moppet shows up to make the two main characters (one of which is always that moppet’s parent/guardian/neighbor/teacher) fall in love. One of mine is an asshole billionaire who sees the woman as a body before he sees her as a woman. Just gets my goat. I’m all for people having consensual, meaningless sex – as long as it’s a mutual using society and not one-sided. Erotica was, after all, essentially made for that trope.

Sponsored links
This book doesn’t fully lean into the curve, but it leans close enough that I couldn’t fully enjoy it. I get that this works for loads and loads of people, so let me recommend this for the following people:

If you like those tropes, this one is a 4.5/5 for you. It’s beyond hot, full of wonderfully written and descriptive scenes. Mikhail and Lindsay defy the laws of physics with their orgasms on several occasions and do not engage in sexual activity until that consent is explicitly given. Anyone who has read my reviews before knows that’s an absolute necessity for me. Consent and respect should be at the fucking core of every relationship and I expect it in my novels as well.

The thing with these two – for me – is that he violates her personal space twice without her consent and seems to think he knows what is best for her. Linsday tells him to get out of her office and leave her alone, he shows up in the parking garage later that night to tell her they will be having sex. She’s exasperated and annoyed, but a few pages later, overwhelmed by the sexual power of his then-revealed tattoo, she consents to a mutli-day orgasm fest.

There’s a whole thing with a guy potentially stalking her – using creepy as shit black roses, no less – and then a whole thing where she’s a lawyer and there’s a professional conflict of interest. Neither of which stands in the way of the bonkfest but that first may be a minor trigger warning for some. Lindsay is always physically safe – thanks, tattooed Russian giant! – so she never comes to physical harm and Mikhail solves the issue and ends it quickly. Like many of the rest of the plot details in this novella, it’s secondary to the sex so it shouldn’t cause too much concern.

In a way, though, this is one of the things I love about romancelandia. Even if I don’t love how the girl gets her mate and her orgasms, the focus is still on her doing that. Even if I don’t love this for me, I know so many others who will and I champion that and celebrate. I wish people wrote more beta males because I find nothing sexier than a man saying “I know you got this, but I got your back anyway” but that’s my box! Your box could be “I am sure you could do this, but I’m going to anyway because that’s how I work”. Rock the hell on!