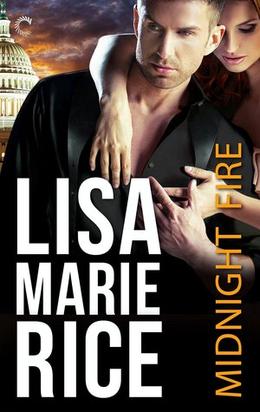 Summer Redding is the Washington D.C political blogger who recognizes her former lover and all-time ideal man Jack Delvaux at the funeral of one of Washington’s most powerful lawmakers. The fact that Jack is disguised as a homeless veteran reeking of piss and sweat, makes no difference - her body reacts like a firecracker! Throw in some smolderingly hot sex, a plot to take over America, a bunch of ex-military hunks and their women who will fight for justice, and you’re in for powerfully thrilling and sexy ride. Giddy-up!!

Sponsored links
Midnight Fire is a sophisticated and action-packed thrill ride into the heart of a doomsday scenario that catches two former lovers in it’s embrace. Political intrigue, military might and government corruption all collide to make this novel a much sexier and much more fun incarnation of Netflix’s House of Cards. In part because the people who do the fucking are actually likable as characters and are much hotter than any of the actors on House of Cards.

For Summer Redding, the realization that Jack is under all of that get-up and smell is definitely the equivalent of one good donkey-kick to the gut (not to mention a giraffe-kick to the pride and libido as well). We get to relive her college humiliation as she gave her virginity to Jack, only to have him show up a couple of weeks later to take out her roommate and sleep with her too. The cringe factor is high here, I mean, who hasn’t had what they thought was a great love affair when they were young, only to realize that for the other person it was just a fling?

Present day Jack is about 50 pounds heavier, muscled, scarred and experienced in the darker things in life. He is ex-CIA, a loner in hiding after a national tragedy that has claimed his loved ones. Jack is no longer the happy-go-lucky, golden-boy slut, making the rounds of every healthy female in his dorm. This Jack is bigger, badder, wiser, more likeable and is actually kind. He is suffering terribly from his personal losses, but more so because of the threats and forces working from within the government to destroy his beloved country.

In fact, it is Jack’s humility and his easy acknowledgement of what a douche-keg he was in his younger years that makes him effortlessly likeable. So, when Jack encounters Summer at the funeral where he is doing some snooping around and realizes he’s been ‘made’, he goes to see her and the sparks fly again. Only this time Summer is very cautious and seems wary of the womanizing Jack that she remembers.

It really makes one consider how a man would react to an important woman from his past - especially if she had gone on to sleep with the entire football team after he had given her some of the best nights of his young life. Would he welcome her back with open arms? Or would she be considered used goods? Or would it matter at all if he had been a little bit in love with her and never forgotten how he felt when he was with her? Lisa Marie Rice writes this part so well, that you find yourself aching for the young Summer and understanding and rooting for the hardened, toughened woman she has become - because she HAD to learn to thicken her skin and protect herself from heartbreak.

It then becomes clear that Jack will have to do the convincing and the wooing, because Summer has grown too. If Jack is to ever win Summer back, the effort will have to come from him. Jack realizes quickly what a gem she was and still is and he kicks himself hard for treating her so carelessly. The explanation given is plausible and so close to the truth of many a horney young man, that you can’t help but acknowledge that while it is unsavory, the reasons given by Jack are actually the rationale of many sexually-free-for-the-first-time young college men. (I won’t give this part away either because I don't want to dampen the impact of Jack’s self-realizations and reflections).

Jack goes on to woo Summer which he does ever so carefully and genuinely with real honesty and forthright declarations. Summer shows us the wisdom and maturity she has developed in the ensuing years between her first and this most recent encounter with Jack. Though her defenses eventually crumble and her rationalizations of Jack’s present interest meets the truth of his behavior, one can’t help but admire Summer for trying to keep her shit together in the face of being made love to by this gorgeous lion of a man.

The love story here is fabulous and deep, and the sex is rousing and connective in an emotionally soulful kind of way. The passion only just manages to keep pace with the intricacies of the story being told, while all of it plays out against the backdrop of the fight of patriotism and treason going on quite desperately across the whole of the United States. I really don’t want to say too much about this aspect of the plot because the book is so interesting. Truly, even if there was no kick ass sex or romance, it would still be a very good, involved read for anyone who enjoys political intrigue.

Lisa Marie Rice has done an excellent job with this fourth in her series of books about the ‘Men of Midnight’. We get sneak peeks at who might fall in love next, and we catch up with a few of the couples whose stories have already been told. Make no mistake, this is an excellent stand alone novel with a fantastic sexual streak that runs through the action in an even handed way. The use of technology - from the spy gadgets to the recon and intelligence is enough to keep every reader happy and involved in all aspects of the plot. All in all this was a thoroughly enjoyable read, and one that I attempted to finish in one sitting because it was just that damn good!

I enthusiastically give this book a 4.75/5 stars, a slightly imperfect score, only because the Made-in-China generator parts (read the book and ye shall find out) turned out to be the weakest link in an otherwise super-kick-ass national security romance plot.