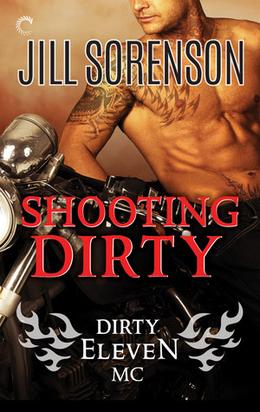 Janelle Parker is overworked, emotionally exhausted and on the verge of just giving up. On everything. As an exotic dancer who spends half her shifts seeing the absolute worst sides of the opposite sex, Janelle is desperate to get off the stage and into a more grounded line of work. As a single parent trying to keep her household afloat, that’s no easy task. Say what you will about stripping for a living, but it’s good money, especially for a woman working her way through school and providing for a rapidly growing boy. Her son, Jamie, is still struggling with the recent death of his father, a petty criminal who was murdered over a debt. The murder is still fresh in Janelle’s mind, too, but not for the reason you might think: she can’t stop thinking about the murderer, Aaron “Ace” Clemmons, a hit man and member of the Dirty Eleven MC. Janelle knows it’s wrong to lust after the man who killed the father of her child, a ruthless criminal, and yet… she can’t get him out of her head.

Sponsored links
Luckily for her, Ace can’t stop thinking of her either, although he isn’t so much “pining after her heart” as he is “hungering for her ladybits.” He knows he should stay away. His life is a desperate, deadly mess, punctuated with violence and a dark history. He’s trying to put it all behind him, but Janelle keeps drawing him back, his memories of too potent to deny. Driven by lust and guilt, Ace decides to throw caution to the wind, and he and Janelle embark on an affair that will leave them both changed forever--but for better or worse, neither of them can tell.

Shooting Dirty is, essentially, half a season of Sons of Anarchy in book form. It’s all there: the ageing and misguided MC patriarch, the long-suffering strippers, the morally ambiguous club versus the truly “evil” club (you can tell the difference because the really bad one sells hard drugs and abuses ladies,) assassinations and kidnappings fueled by murky club politics. Of course, SOA featured significantly less penetration, but hey--it was network television, what can you do. Unfortunately, Sorenson’s latest doesn’t do much to distinguish itself from the works it’s clearly building on.

While I understand the appeal of burly, slightly criminal men with hearts of gold, Shooting Dirty doesn’t manage to drive home the ever-important “heart of gold” bit. Janelle and Ace’s relationship lacks a certain depth of emotion: for all the kinky sex and overwrought declarations of affection, it never manages to feel particularly real. Ace’s relationship with his daughter is sweet, certainly, but similarly fails to feel authentic. The most likeable male character in the whole book is clearly being set up for his own novel down the line, (hey, Rex! Looking forward to getting to know you..) but we’ll have to wait and see how that goes. Additionally, for all the machismo violence, Shooting Dirty’s plot is so convoluted and drama-heavy that it’s hard to focus on any of the emotional bits. Shared trauma does not a convincing love story make!

Now, I have to say it, because it’s starting to feel endemic--I’m officially and thoroughly exhausted with romance novel heroines whose entire backstory is rape. There are plenty of reasons for a woman to distrust romantic love: people are, generally, unreliable shitheels, so the idea of entrusting one with your heart can be pretty scary. Relationships can be anything from toxic to suffocating to just plain boring, and getting into one again after escaping one that wound up being a disappointment is a daunting prospect. Some people just get distracted by other stuff and sort of forget about that whole “dating” thing. Others just find the whole idea sort of terrifying from the start. So why, why, why must every other romance feature rape or abuse or both? It’s trite, it’s overplayed, and unless you have a damn good point to make, I think it’s time to pack it in. If you must have a rape, and all of the awful emotional fallout that sort of abuse causes, be a substantial part of your plot, then for the love of god don’t put these words into the mouth of your male lead (emphasis mine): “Then I told you I wanted to fuck you, and you didn’t say yes, so I figured I’d pet your pussy for a few minutes and go home with a hot memory to jack off to. Instead I get slapped for my trouble.” (168.) That delightful tidbit is then followed by her going, “aw jeez, I really shouldn’t have slapped him, even though I never consented to being manhandled in any fashion.” Nope. That’s just a whole pile of nope. Don’t do that.

Overall, Shooting Dirty is heavy-handed where it ought to be gentle, and stomps around in combat boots where it ought to be heavy-handed. Janelle is supposed to be a steely woman who takes care of herself, but she just comes across as frail and incredibly damaged; Ace is supposed to be a badass with a heart of gold, but he comes off as a bit of a psycho. The plot is more “macho soap opera” than “compelling thriller.” If you’re really looking for tense, morally ambiguous, motorcycle-riding men and then women who love them, there are plenty of novels and shows and movies to choose from: unfortunately, I can’t really recommend choosing this one.