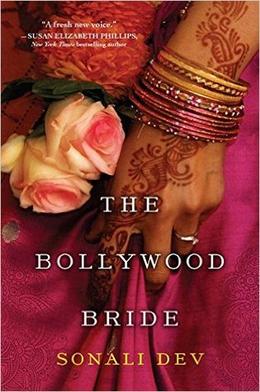 Sponsored links
Many of the things I loved about A Bollywood Affair, Dev’s first book, are there. (Which, real talk: one of the best romance novels – scratch that, novels – I’ve ever read so if you haven’t treated yourself to that gem, get on it immediately.) The rambling family, the amazing food, the detailed descriptions of the beautiful clothes, the way the book felt authentically Indian. All there. Sam from A Bollywood Affair even gets a brief shout out and I literally said out loud “oh, hi, buddy! How are you?!” because I’m vaguely pathetic like that and I believe we’ve discussed before in my reviews how if the book is good, I believe the people are real.

What I didn’t fully connect with in The Bollywood Bride was the heroine. Ria is a famous Ice Princess and a Bollywood star, but who in reality is like a duck. Calm on the surface but peddling furiously underneath. The Ice Princess persona (plus realities of her cultural life) means she can never be honest with anyone around her and she ends up carrying crushing guilt and giving herself emotional trauma because of it. Dev was clear about how Ria arrived at all her decisions, there were clear explanations as to why she thought she had to do what she did, but I still found myself wanting to shake her at so many opportunities. SO MANY. Largely because she needs some serious therapy and her emotional prison is one of her own choosing.

The hero is Vikram, whose pent up rage at Ria is legitimate but also frustrating. They’ve known each other for ever and her behavior and decisions have hurt him in the past. I kept screaming at my Kindle “just freaking TALK IT OUT”. Their connection is so strong, I had a hard time understanding why we couldn’t add trust to that connection, especially on Ria’s part. Vikram’s anger was very understandable.

However, if I’m totally honest, dear readers, the fact that the characters felt so frustrating means I cared about them quite a lot. That means they were real to me, which means Dev did her job.

Despite those frustrations and because of them, I really liked this book. The writing is sumptuous and the description of the wedding the story is largely based around is fantastic. I loved the interactions with the family, I loved learning about the traditions and the fabrics and the ways Indian culture translates in the United States. A totally different Indian immigrant experience than the one from Dev’s first book and I loved that she showed us a different side of this. Both are authentic and both are important.

The book, readers should know, deals heavily with mental illness. Ria’s mother suffered from advanced and untreated schizophrenia and Dev’s descriptions of her suffering and the suffering that caused in the life of her family are detailed. From my limited experience working with children of parents with mental illness, Ria’s baggage is authentic. As I said above, she has chosen this prison she’s put herself in, but the reasons she’s made those choices are clear.

I know from research and talking to both Indian and Indian-American pals that it’s simply not. For some reasons which are quite tied up in the Hindu socio-religious system that is entwined with the cultures of that subcontinent whether someone is religiously Hindu or not, mental space is considered private space and not for someone else to be a part of. There’s gender stuff in here too – women are simply never to be weak. Ever. This is one of the reasons why domestic violence is so dramatically under-reported in India – women are taught that to complain or report is weakness not strength and weakness is shaming and one must NEVER bring shame upon one’s self or one’s family.

I can’t imagine the burden of feeling your brain break or loosing control of yourself. I can’t imagine watching a loved one deal with that and the fear it may happen to you. We have a history of dementia in my family and that is scary enough – we began to loose my grandmother to that beast about seven years ago and buried her body a few weeks ago. The long, sad journey to the inevitable was gut wrenching. I can’t fathom living with something like Dissociative Identity Disorder or Paranoid Schizophrenia or the fear that it may happen to you someday and feeling like there’s nothing to stop the tidal wave.

All of that to say, I hope that if Ria’s story hit close to home you have a tribe around you whom you trust.

This may sound like a muddy review and I don’t mean it to. Ria and Vikram’s love story is well worth reading – WELL WORTH – and Ria’s life is one worth wrestling with. I like that Dev is willing to wade through life as she threads people to their happily ever afters. She is absolutely an author I will automatically read until she stops writing.