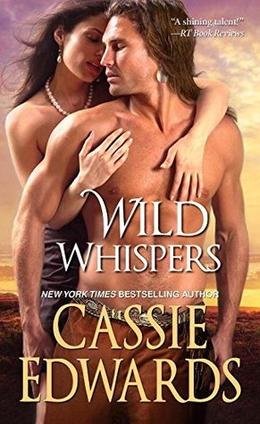 Y’ALL. This book is about four hundred problems rolled into one. If I had bought it myself on Amazon, it would have been top of my “did not finish and never will” pile because holy Christ on a cracker, y’all, this book is … well, the polite reaction would be to say that it’s not for me. However, I’ll be fully honest and say that I’m not sure how it could be for anyone!

Sponsored links
(As I’ll get into a bit later, it is probably for some people as this is Edwards’ 100th book, but this is resoundingly NOT FOR ME.)

Want a quick summary? We’re in the American South pre-Civil War. White girl works in a circus with her parents and her dad is an absolute douchenozzle. She sees a Native American Warrior and is in serious insta-love with him (maybe his pheromones waft across the field?). Douchenozzle kidnaps a girl from Warrior’s tribe as some sort of side show act for his circus. As the girl is deaf and mute and Warrior’s little sister, Warrior gets pissed and comes for revenge.

As he is now in love with White Girl (her pheromones too?) he “kidnaps” her and takes her back to his tribe upon rescuing the little girl and does this to make sure Douchenozzle won’t follow them.

So White Girl now is part of the tribe and Warrior eventually becomes Chief and she becomes Cheiftess. They have a few more confrontations with Douchnozzle before he’s defeated and they live happily ever after.

I’m fairly anti-insta love so perhaps I carry a bias to this one; I’ll own that. But this whole thing just rubbed me the freaking wrong way. I’m not an expert in Native American culture or folklore, so it’s possible this is super accurate, but my radar went off a few times that we were dealing entirely in the realm of stereotypes and not reality. If you’ve read this book and I’m wrong – tell me.

I also found it highly suspect that Warrior had a full grasp of the English language and that there’s no evidence in this book of White Girl learning his tribal language. His customs, yes, but not his language.

Speaking of language, the dialogue in this one was stilted and dry. You wonder why I’m using nicknames for all the characters? Because I literally did not care enough about them to write down their real names in my notes. That is how two dimensional and annoying I found them.

There’s a huge and necessary conversation right now happening in Romancelandia (Romance Novel Twitter, Tumblr, Facebook, etc) that we need to be promoting and reading diverse books. There is a clear bias towards books by white people about white people in best of lists and the like. It’s not that books by people of color and about people of color don’t exist – there are so many wonderful ones! – but they just need signal boosted. If you’ve read my other reviews, you know I’ve been making serious attempts in my personal reading lately to read authors I’m not familiar with who write characters of color. My life isn’t whitewashed so I’m not sure why my reading always has been.

When I first read the description of this one, therefore, I was stoked. The only other books about Native Americans that I’ve read recently was a few truly stellar Sarah M. Anderson ones and I was excited to expand my repertoire. I got two paragraphs in and started to grumble.

So I checked Cassie Edwards’ biography and found that while she is white, her grandmother was Cheyenne and most of her 100 books have focused on Native Americans. “Wow”, I thought, “maybe I’m wrong.” And then I read that she started writing in 1982. And everything made a bit more sense. This book absolutely reads like an old school romance novel, the kinds that gave bodice ripping their name. They, friends, are not my jam. I would be you money that if you read Edwards’ first book in 1982 and this one, the styles would not be different.

More power to her, she’s clearly successful and people like reading her. I hope she finds joy in writing, but I do also hope she finds new sources for her stories and perhaps updates her dialogue patterns. (She also, I learned from the internet, struggles with unintentional plagiarism or did at one point, so I hope she’s sorted that now.)

Overall petals, if you love reading romances from the 1980s and 1990s, this one may well be up your alley. If you like the post 2000s books though, give this one a hard pass.