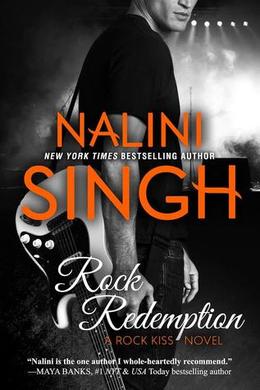 Kit/Katie/Katherine is the child of sports and modelling royalty, but she made it to fame on her own blood, sweat and tears. Along the way she befriended and fell in love with Noah, also born to money, and now one fourth of a hot and sizzling rock group that earned their way to the top. Sounds like the perfect romance, right? It would be except for the crazy world of social media and perceived fame, fortune and romance, and the heart crushing secrets that cause their love to derail. If you can hang on tight to what you love and keep focused on the positive, this story of love and on-going redemption is for you.

Sponsored links
Nalini Singh is a hugely popular writer for a reason - she is damn good at writing romances. Solid plot, fantastically and exquisitely fleshed out characters with three dimensions to their emotions, wit and intelligence, makes her one of the most reliable and enjoyable authors writing in the romance genre today. Her other talent is at capturing the frailties that all of us possess to some extent or another. How many of us have behaved abominably to the one’s we love? How many of us have given second chances, and third and fourth, when we damn well knew we shouldn't?

Ms. Singh understands that when the heart isn’t ready to give up what it wants, those desires start to verge on the obsessive.

That is the story of Kit/Katie/Katherine Devigny, former soap actress and the daughter of two amazingly successful and gorgeous people - the tennis champ father and supermodel mother. Kit has scraped her way up the ladder - waiting tables and going on cattle call auditions for years to make a name for herself as an actress. When we meet Kit, she has just finished one of her first major roles that has earned her an Oscar nod. She is also heavily in debt as she has been forced to purchase a large private property and hire bodyguards because of a mentally ill, potentially violent stalker.

Que Noah St. John, gorgeous guitarist and sex God of a rock band, who fucks anything and everything that moves - sometimes even two at a time. Though Kit knows this, the friendship they began while she was waiting tables and he was an up-and-coming musician, blossomed into a very intimate friendship. The quiet nights of confiding in each other and the off-the-charts chemistry were beginning to go down the road of love and who knows what else, when Noah cruelly orchestrates Kit walking in on him fucking a groupie. Though they hadn’t even so much as kissed, Kit, devastated, leaves to try and mend her broken heart - until the night Noah calls her, drunk out of his mind and about to do something very stupid with a full syringe in a dingy hotel.

Now, at this point, what would any of us do? The deep feelings that Kit developed and her kind nature left her powerless to turn her back on this loveable and, frankly, likeable piece of scum that broke her heart. But as we delve further and further into who the character of Noah is, we get glimpses into the nightmares, alcohol abuse, and avoidance of actual intimacy during sex that tortured him. Flashbacks of his childhood as a terrified child of seven, thrust into the lonely world of a boarding school after some unspeakable trauma starts to give us some clues that very nasty things have probably happened to our favourite reprobate.

Noah tries to protect Kit by pushing her away, by rejecting her sexually and trying to make her understand (without actually telling her why) that if he got involved with her he would make her unhappy and destroy her life. Noah all but tells her he is worthless and not someone she should waste her wonderful self on. Each time it happens, our hearts break for Kit, until she looks within and realizes that her deep love for this man - combined with the glimpses she gets of the vulnerability and mysterious damage that lies beneath his tough facade, actually makes him worth fighting for.

To make a long story short, this book is not hugely sexual, in that there aren’t a lot of graphic sex scenes. But what the book is rife with are a lot of scenes of two people finding the courage to be vulnerable and to trust one another with their real selves. This is highlighted by the contrast between their celebrity lives and their private lives through the plot device that forces them to have to pretend to be lovers for the paparazzi in order to save Kit’s chances at landing a major starring movie role.

This book is about a true love story. Okay, so most people aren’t insanely wealthy rock stars and movie stars, but we all come with a significant amount of emotional baggage. Learning to love and make room for another person’s foibles, shortcomings and past hurts is really what true loving is about. The physical intimacy that arises from that acceptance is a joyous wonder and Noah begins to discover the deep pleasure of kissing and snuggling and being stroked and cared for. Kit gives him so much acceptance that he eventually reveals his secret to Kit.

While a lot of the plot devices are somewhat trite - the “held hostage by the stalker with a gun” scene - this novel ultimately reads like a creamy piece of cake - rich, tasty and filling. It’s also quite a long (though appropriately long for the subject matter) romance novel at a whopping 40 chapters in all. Each chapter advances the plot and gives us a rich look into who Noah and Kit are as people, friends and ultimately lovers.

Nalini Singh has written a rich, juicy and emotion packed book, one that I hope you’ll pick up and enjoy.